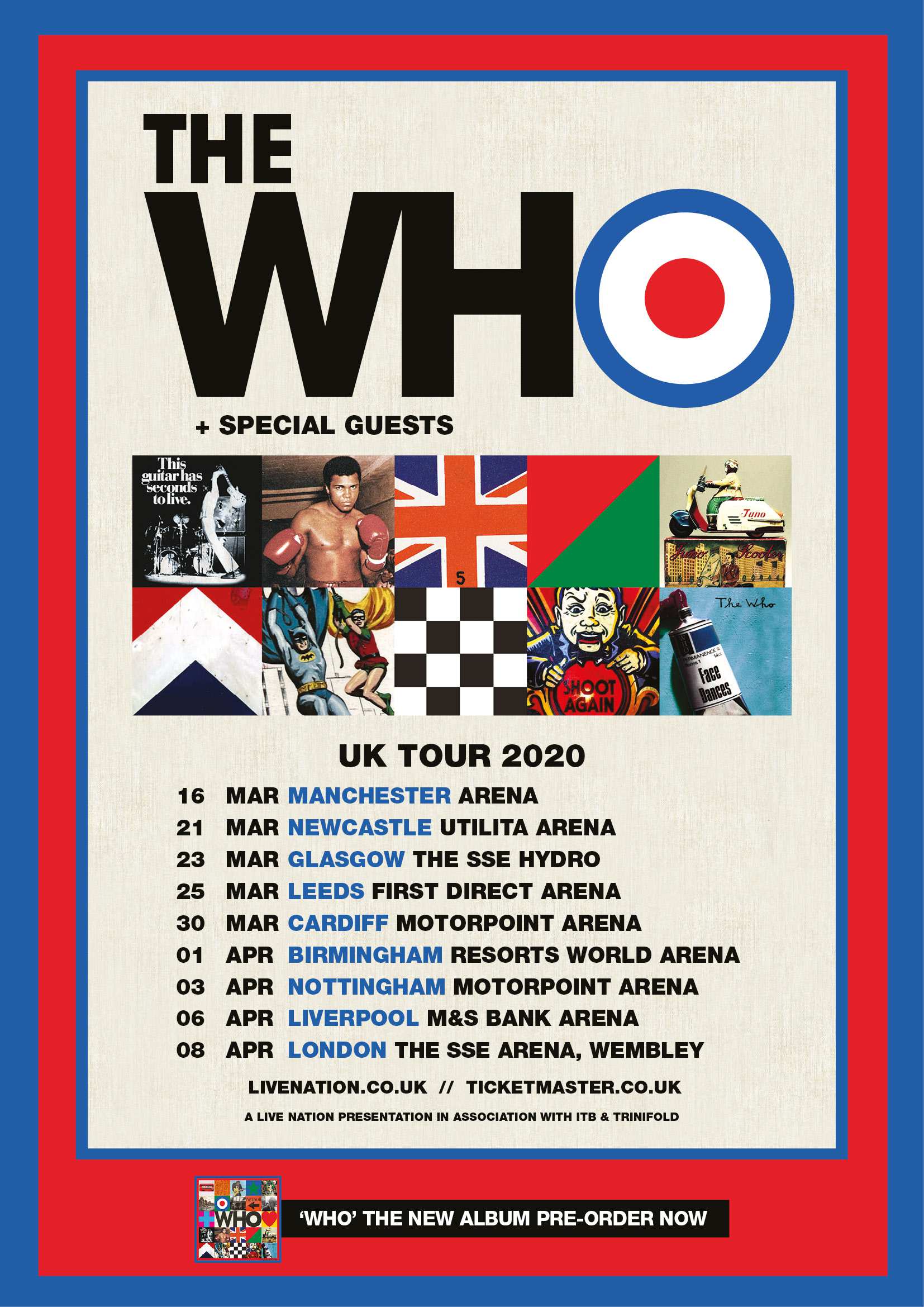 Described as one of the “Greatest Rock Bands Ever“, The Who have been with us in one way or another for over 50 years and wow, have they created some timeless classics during that time and been a humungous influence on SO many bands and artists….?? With only two of the original members remaining, well into their 70s’ they still continue to rock the hell out of a venue and with a nationwide UK tour on the cards for March/April 2020, they show no signs of slowing down, despite the statement that they were calling it a day in 2015 !!!

Considering how long they’ve been around, taking out live albums, collections/best of’s and anthologies, they have only brought out 12 studio albums (including the new one “WHO“, due out soon).

In the course of this feature, useful for the uninitiated, we’ll be looking at (what I consider to be) their five best albums and in no particular order of preference – My Generation, Tommy, Live At Leeds, Who’s Next and Quadrophenia.

My Generation – Back to 1965 we go for their very first album, which fitted in nicely with the current music trend at the time!! Listening to it now, it has aged well, BUT very much OF ITS TIME and with classics like the title track (featuring that immortal line – “Hope I Die Before I Get Old” – somewhat ironic considering Roger Daltrey is now well into his 70’s and still holding his own), “The Kids Are Alright”, “I Can’t Explain” (their first single) and three covers (James Brown and Bo Diddley) it created an audio springboard for the band and established them in the mod scene, popular back in the mid 60’s. It’s curious to look back at this seminal album and the influence it has had on so many bands and artists – Oasis, Pulp, Blur the list goes on, a very impressive debut. Pure, raw and energetic…memories are made of this !!

Tommy – 50 years old !! Probably THE very first Rock Opera which has gone on to become a cult classic with a wealth of memorable songs which stand up in their own right. Reinvented in so many ways – a movie version, an orchestral version, a dance version, a Broadway musical – it has gone on to sell over 20 million copies and been re-released and reissued in many forms over the years. Ground-breaking in many ways, it has never been equalled in its concept and creativity. Rolling Stone have gone on to drop it into the Best 500 albums of all time at number 96 and although the storyline has been condemned and criticised as “sketchy” and “pretentious”, considering when it came out, one has to admire the sheer bravado to release such a ground-breaking work of art. Classic in every sense, with a wealth of memorable tunes – “Pinball Wizard”, “See Me, Hear Me”, “I’m Free” etc, this took the band into the stratosphere and proof that they were a force to be reckoned with, timeless….

Live At Leeds – Cited by many critics as “the best live album of all time“, recorded in 1970, sound quality is superb, when you consider how old it is. Probably the best representation of their live sound and featuring the classic line-up ( Daltrey, Moon, Entwistle and Townsend) and a superb setlist featuring live versions of their live faves including a very extended version of “My Generation” which served as a medley too (worth buying for alone) and superb covers of classics like “Summertime Blues” and “Shakin’ All Over”. Reissued many times over the years with extra tracks added to the original 1970 release (seek out the expanded edition if you can), as a raw, recorded representation of a band at the height of their power it is superb. A total freak-out, best played LOUD, VERY loud….awesome.

Who’s Next – Researching this album, I came across a 6 disc box set released in 2000 called “Lifehouse Chronicles” by Pete Townsend. Now you may wonder why I mention this ??

Well, if this ain’t Prog, I’ll eat my own feet  !! Due credit to Wikipedia for the following text: “The story was to take place in 21st century Britain, in an age where pollution has become such a drastic problem that most people never set foot outdoors in their life. This populace spends most of their time in “experience suits”. These suits provide the people with artificial lives superior to any they could eke out in the real world, yet devoid somehow of spiritual fulfilment. One discontented soul, known only as “The Hacker”, rediscovers 20th century rock and roll music, and breaks into the computer network controlling the suits to invite people to leave their suits and come together for a concert. Despite the best efforts of the fascist government, thousands of people gather at the Hacker’s concert, with millions more watching through their suits, as the musicians and audience perform experimental songs like those described above. Just as the police storm in and shoot the Hacker, the audience and band manage simultaneously to produce the perfect universal tone, The One Note, and everyone participating in and watching the concert simply vanishes, presumably having departed for a higher plane of existence. The story is seen through the eyes of a middle-aged farmer named Ray, a farmer from a remote unpolluted corner of Scotland, who travels south looking for his daughter who has run away to the concert”. Don’t know about you, but the man is a modern day visionary and prophet !!

Pete Townsend came up with the original concept in the early 70s, but it had to wait until 2000 for its ultimate release as a 6 cd set !!! 8 of the tracks used in this conceptual piece first saw the light of day on “Who’s Next” (Baba O’Reilly and Won’t Get Fooled Again for example), which also feature extensive use of an ARP 2600 synth, which if you think back to the first album, was VERY much “of its time”, the songs here have aged VERY well and are still used in the current live set, a street apart from their mod days….

Ranked by many as the best album they ever made and cited in SO many “Greatest  Albums Of All Time” lists (eg. Number 28 in Rolling Stone’s Top 500), it was even inducted into the Grammy Hall Of Fame for “lasting qualitative or historical significance“. How can you begin to argue with that ??? A true timeless classic from 1971 and yet more proof that the period 1970 – 75, for many bands, was an incredibly creative, productive and progressive era. It has been re-released a number of times with assorted bonus tracks, search for it now and get it added to your collection – CLASSIC.

Quadrophenia – Released in 1973, you’ll notice that ALL five of the albums selected here are from that period in the band’s career and why not ??

Having garnered rave reviews and critical acclaim for “Tommy”, Pete Townsend went on to write this new masterpiece, yet another rock opera and what an album it is. Based around a disillusioned mod who is trying to establish his identity, the title alone says it all. Pulled in multiple directions by parents, job, music and peer pressure, our protagonist ultimately ends up in Brighton, synonymous with the mod movement back in the 60s where he discovers a few home truths and ultimately ponders on ending his life (although the ending is left ambiguous so you can make your mind up, maybe PT was considering a sequel LOL).

The first track (I Am The Sea) complete with the sound of the sea crashing on the rocks, acts as a prologue before launching into a full-on rock-out “The Real Me” with Daltrey on top form. Featuring the classic line-up and once again, utilising the versatile ARP 2600 synth throughout (with a recurring theme used extensively to link certain tracks), this is yet another classic album with more than its fair share of timeless tunes. A number of re-issues are available including an orchestral version, Townsend even learnt to play the cello for the original recording…..

As a long term (but VERY open-minded) Prog fan, I cannot recommend this album enough and if you’re looking to check out the band for the first time, this is probably a good place to start as it encompasses every aspect of the band’s style and musical brilliance, including vocals from Keith Moon on his theme “Bell Boy” (every member had their own theme, Roger (“Helpless Dancer”), Pete (“Love, Reign Over Me” – the album’s swan-song) and John (“Doctor Jimmy”)). In 1979, a movie was made of the album featuring Phil Daniels in the lead role “Jimmy” and Sting as “Ace Face” which garnered rave reviews from fans and critics alike and although not a musical as such (unlike the film version of “Tommy”), closely followed the basic concept of the album’s storyline with stellar performances from all concerned and certainly resurrected avid interest in the original album.

I seriously suggest you check out the four disc “Director’s Cut” of the album and better still, if you have the technology to make the most of it – the 5.1 cut.

Overall, five albums that should form an integral part of every serious muso’s collection. As English as Fish ‘n Chips and with more ideas, concepts and musicality than you can shake a stick at……

|
live at leeds, mmh, MMH-The Home of Rock Radio, quadrophenia, Rock Band, the who, tommy, Who, who's next