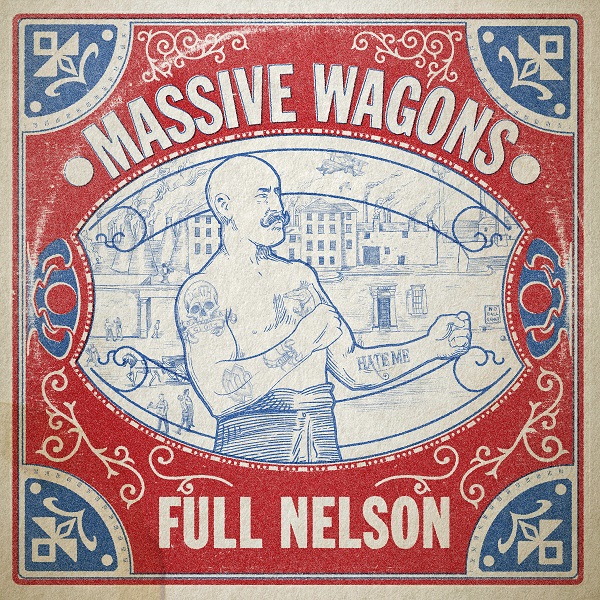 I’m ashamed to admit that, despite being aware of them and their formidable live reputation, I had never given any significant listening time to Massive Wagons until I saw them at Steelhouse Festival last month. That show was a real sucker-punch to the senses (and not just because of Barry ‘Baz’ Mills bright green trousers) and the first thing I did upon returning to civilisation was to look up their back catalogue. You could say that I have jumped on the, ahem, band wagon. People who believe in some higher power often say that things happen for a reason and, while clichés like this normally refer to grander matters than my reviewing schedule, it was indeed a pleasant coincidence that the Steelhouse show fell only a couple of weeks prior to the release of Massive Wagons’ upcoming album: Full Nelson. One advantage of reviewing a band with whom you have only recently become acquainted is that you don’t carry any of the inclination towards positivity that comes with having been an avid fan for many years, ie, you can be objective. On the other hand, as any music fan will know, the excitement of seeing an amazing rock show takes a little while to shake off…

Lead single, Under No Illusion, starts the album with a mid-tempo, sing-along tune that is a combination of classic rock swagger and old school rock n’ roll fun. There’s none of the aggressive attitude featured in Nails (opening track on their last album, Welcome to the World), instead going for a less intense sound to deliver a similar lyrical message: that of being yourself and screw anyone who tells you how to do things. Next up, an attention grabbing drum fill launches China Plates. It’s the lyrics on this one that make it one of the stand out tracks: one part hilarious attack on society’s use of Facebook, one part catalyst for self-evaluation (most people on social media will be guilty of at least one of the antics described). My favourite line concerns when, rather than un-friending someone, you unfollow them in order to ‘carry on with this charade’. Outside of comedic and/or punk groups, this is one of the few songs I have heard that so bluntly puts forward its opinion on the topic, and in such a damn catchy manner.

After the opening couple of tracks, Massive Wagons’ modern take on the classic rock n’ roll sound is only really given a few more outings, namely on Billy Balloon Head, the chorus to which is underpinned by a classic 12 bar blues walking bassline, and Back to the Stack, a fitting and respectful tribute to the late Rick Parfitt (Status Quo) with a chorus clearly engineered for live outings. While both tracks are excellent, they don’t seem to be anything new for the band. They are just a refinement of a formula used to great success on tracks from their previous album. The tracks that ignore said formula bring variation that takes the album from a potentially monotonous stream of bouncy hard rock tracks (no one needs another Airbourne) to a brilliantly arranged collection of songs. Northern Boy is the ballad of the album, a heartfelt tribute to the band’s roots that will strike a familiar chord with many fans, no matter where they are from. In true ballad tradition, it also features a simple yet effective guitar solo over the closing chords. It is followed up by the heaviest track, Robot (Trust in Me), a song ideally placed to get maximum impact from the contrasting sound between its thick, dirty sounding riff and the acoustic strumming of the previous track. Singing about the growing influence of machines and artificial intelligence is becoming an increasingly frequent topic for many bands, and the fast paced, angst ridden vocal delivery used here fits the ominous warnings perfectly. Other than Robot, most of the tracks have a very down-to-earth lyrical feel that makes the whole thing that bit more personal and relatable. I stand by my previous statement that China Plates is the lyrical gem of the album, but I’ve no doubt if you asked ten people for their favourite line then you will get ten different answers.

With Full Nelson, Massive Wagons have made one of those albums with enough diversity to keep the listener hooked throughout, but without going completely off the rails with something that is no longer recognisable as them. The combination of engaging and relatable lyrics, addictive melodies and numerous air-guitar worthy riffs makes for a potent mix and is further enhanced by the energetic and unique vocal performance. I said at the start of this review that only being a recent addition to the Massive Wagons’ fandom allows me to more easily be objective, and with that in mind I hold no reservations in declaring this to be their best album to date. For anyone who takes their rock music seriously but likes to have a bit of fun at the same time, Full Nelson is essential listening.

Highlights: China Plates, Robot (Trust in Me) and Last on the List

Full Nelson is out on August 10th via Earache Records and can be ordered here.