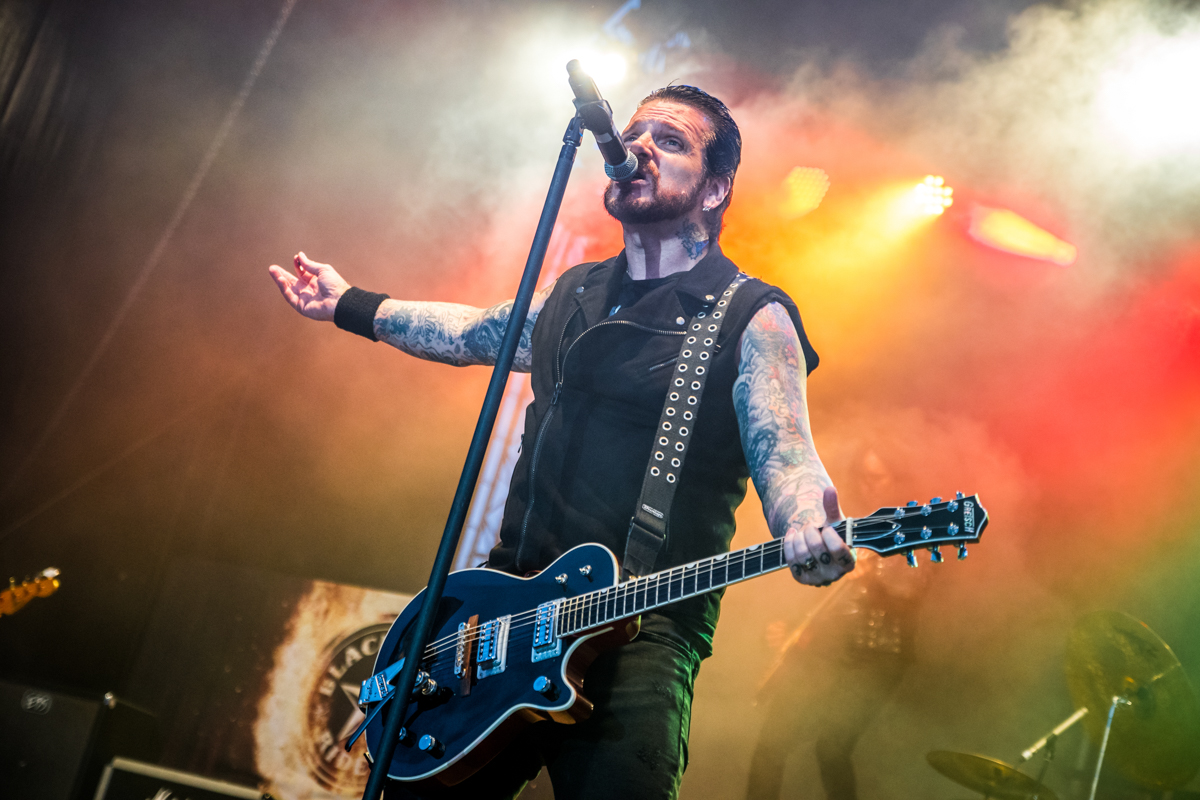 In the Old Testament it is said to have rained continuously for forty days and forty nights. Now, while Steelhouse Festival was only a weekend affair, the sheer volume of water discharged onto the site made it feel like the same sort of scale. This, combined with the gale force winds that reaped destruction across the campsite, proved to be too much for some people to handle, and Sunday morning saw a steady stream of dishevelled revellers heading down the hill to return to the comfort of hearth and home. Those who did remain entered the arena to witness delayed soundchecks and to hear the first whisperings that some bands may have withdrawn themselves from the festival…

More on that later. Despite arriving on stage nearly two hours later than planned, the day began as promised with The Dust Coda. This would be the final band of the weekend to fall under the ‘blues-rock’ category, with the blues side of things being emphasised on songs such as Sweet Love is Gone, where singer and guitarist John Drake showed off a falsetto range that took me completely by surprise. Throughout most of the set he looked very intense, more so than the song styles really required, but it certainly gave him more gravitas on stage. The opposite would follow in the form of Those Damn Crows frontman, Shane Greenhall, who was very friendly and chatty. Haling from Bridgend, these were local lads who many seemed to know personally, which went a long way to explain the sizable and enthusiastic crowd. While most of their set went by in an enjoyable yet forgettable blur of radio ready hard rock, a couple of songs did stand out for the variety in mood and tonality they brought with them, most notably their current single, Blink of an Eye. Not a future classic by any means, but enjoyable enough at the time.

By this point in the day, certain rumours were gathering significant momentum around the arena. These were finally addressed by a spokesman who confirmed that both The Quireboys and The Dead Daisies would no longer be performing that day. Specific reasons for this were not given, and I will not give a voice to unverified excuses here. However, needless to say that many in the crowd were not happy, with a significant amount of frustration and anger aimed at the Daisies in particular. It wasn’t all bad news though, and kudos to the Steelhouse organisers for falling back on that most reliable of crowd pleasers: cheap booze. All alcohol was reduced in price for the remainder of the festival, and so it was in a slightly more befuddled state that the crowd re-assembled for an extended set from Mason Hill. They were the first of the bands to be given more time on account of the days bill now being two acts short, and the young Scots certainly took advantage of their situation. They went hell for leather to deliver the one of the finest hard rock performances of the festival so far. The songs all stuck to a simple yet effective formula of driving riffs and massive choruses. Their ace up their sleeve is undoubtedly vocalist Scott Taylor. His impassioned performance was mesmerising, whether it was from straining for those higher notes on a final chorus or the genuine joy he displayed in between songs: joy and disbelief that the biggest crowd they had ever played to had turned out to see them and was growing with every song. After closing with a cover of Cochise by Audioslave (if you closed your eyes it could almost have been Chris Cornell himself singing), the band walked off to the tumultuous applause from a crowd that had just witnessed one of the best surprises of the festival.

Enough people knew the live reputation of the next group for their performance to be no surprise whatsoever. But, just because it was not surprising does not mean that the monster of a set delivered by Massive Wagons was any less impressive. Storming onto stage wearing bright green trousers and a bowler hat (who says all rock bands need to wear black?), singer Barry Mills barely kept still from start to finish. There wasn’t an area on stage he didn’t visit, or indeed off it, as it was where he went around the front row hugging and making friends at the end of China Plates (a partly hilarious, partly terrifyingly accurate rant on societies use of Facebook). This wasn’t their first song, and certainly not their last, to feature blunt, telling-it-as-it-is lyrics coupled with infectious yet forceful melodies. Despite the stubborn persistence of the rain, songs like Ratio, Tokyo and Fee Fi FoFum all when down an absolute storm (if you’ll pardon the pun), with the crowd loving the seamless interplay between hard rocking riffs and sing-along choruses, all served up by a band who all looked to be having the time of their lives. If they hadn’t already withdrawn it would have been interesting to see how The Quireboys and The Dead Daisies fared, because Massive Wagons hadn’t just raised the bar for the weekend, they’d broken it.

The performance that preceded them was clearly not lost on The Wildhearts: one of the first things Ginger said after their first few songs was that he was thrilled to see rock music in such ‘safe hands’ as Massive Wagons. But this wasn’t to be the only band he mentioned, oh no. He had his crosshairs firmly fixed on The Dead Daisies, who’s no-show at the festival he described as a ‘c**tish thing to do’, although he did sympathise that ‘landing your private helicopter’ in this weather was a difficult proposition. The final blow was pointing out that their bassist, Danny McCormack, has a prosthetic leg and he still made it up the mountain… This criticism of the Daisies surfaced again and again between songs but, as amusing at it was, it would have been a little shallow if The Wildhearts couldn’t deliver a decent show themselves. But, let’s face it, did anyone ever doubt that they would? Their set was the perfect punk rock onslaught, all fast rhythms and energetic guitar playing. The positivity shared between Ginger and the crowd was infectious, and his daft crowd participation added an extra level of fun to the whole affair. During Weekend (5 Long Days) the crowd were encouraged to sing back a chorus from any song they liked rather than what Ginger was singing, and the chaos that ensued brought a smile to everyone’s face. The timing couldn’t have been better either, with the sun choosing that moment to appear and help to create one of the weekends genuinely touching moments.

It was with mixed emotions that everyone awaited the final band of the weekend: excitement at the thought of not having to endure sodden jeans for much longer, and sadness that it was the beginning of the end for Steelhouse 2018. Ending on a high was clearly the intent and if any band could wrap things up in an almighty fashion then it would be Black Star Riders.  Their set was a solid stream of modern classics: All Hell Breaks Loose, Finest Hour, Kingdom of the Lost, Bound For Glory… All interspersed with gems from their latest album Heavy Fire and the now standard Thin Lizzy covers. Ricky Warwick was easily one of the best frontman at the festival, cutting a striking (and slightly intimidating) figure who was equally comfortable with guitar in hand or relying on his voice alone. Standing next to him was Scott Gorham, living proof that age is no barrier to music, now in his late sixties and still an engrossing guitar presence on stage. My only complaint would be that the drum sound was criminally bad: an overly compressed, electronic sounding mess, with drum fills that sounded more like a pneumatic drill than the warm and wide sound that suits BSR’s style. A minor gripe maybe, but it was the only downer on an otherwise brilliantly executed rock show. As the ending of Whisky in the Jar built to a thunderous finale, the fireworks were launched, and I doubt that there was anyone in that field who regretted their decision to stick out the weather and see this weekend through. If anything, many took a form of sadistic pleasure in rocking out regardless of what the elements threw at them. What can we say about Steelhouse 2019? Bring it on.

Midlands Metalheads band of the day: The Wildhearts