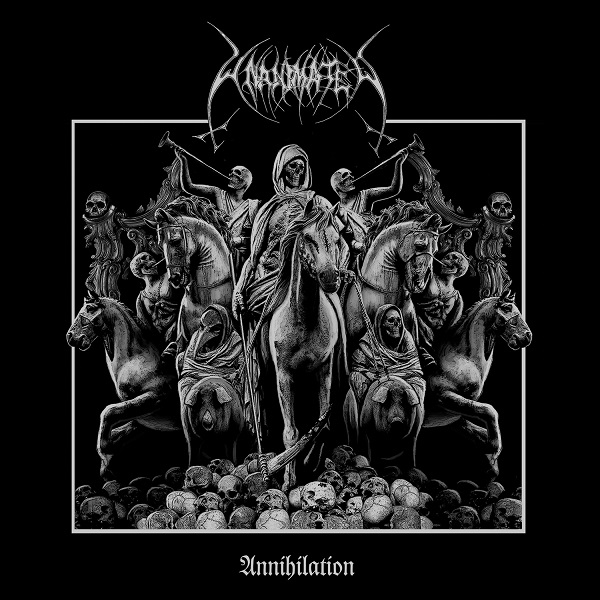 When you take a step back, it’s actually quite incredible how much extreme metal was thriving in Sweden in the early ‘90s. Gothenburg style melodeath, old school Swedeath and the second wave black metal scenes were all taking shape, with many acts that were involved still at the forefront of their respective genres today. Another movement that melded melodic death and black metal was spearheaded by Dissection and bolstered by Sacramentum and our reviewees today, Unanimated. For one reason or another, these bands dissolved after only a few records, all making a return in the ‘00s. Unanimated released In the Light of Darkness in 2009, but have since been dormant for eight years. Having been picked up by Century Media Records, they are now preparing for a more consistent stream of releases, starting with the Annihilation EP.

We are thrown into the “Adversarial Fire” to welcome us back into the fold, which leads with a wicked tremolo riff and relies on dense, shifting chords. Despite the heavy black metal influence on the aforementioned riff, the song is predominantly death metal. Truth be told, it’s a bit bland and repetitive, and doesn’t do enough to justify the five minute run time. “From a Throne Below” is far better in that regard, with stronger riffs and a good use of melodies to create a disharmonic atmosphere. The oppressive blasting of its early moments belies the moderate pace the remainder of the song moves at, allowing the riffs to breathe and the aforementioned melodies to flourish. “Of Fire and Obliteration” is as misleading a song title as you’re likely to hear this year, mixing acoustics with symphonic instrumentation, haunting clean vocals and a marching snare beat. A faint tremolo riff and backing choir are low in the mix during the latter stages of the track, loud enough to add that extra dimension to the song, but quiet enough not to be overbearing and completely alter the mood. The title track then wraps things up with a dynamo of extreme metal; a mixture of thrash, death and black metal wrapped in dissonant harmonies, moving in fits and spurts as it cycles through its various movements.

When listening to Annihilation, there were a few times where a melody or riff would take me back to that ’90s melodic black/death scene. However, there is not an overwhelming dose of nostalgia, and the EP largely feels like the band are moving forward without ignoring their roots. It can be difficult to strike this balance between past and present, so it’s to be commended that Unanimated do a good job of doing so here. There’s also enough variation from track to track to keep things feeling fresh, although the biggest problem is that none of songs are ever close to the cusp of greatness. “From a Throne Below” and “Annihilation” are the two strongest cuts, but they’re merely solid without being spectacular. “Of Fire and Obliteration” is a bit too brief to reach its full potential, whilst “Adversarial Fire” does nothing worthwhile with its five minutes in the spotlight.

Ultimately, it’s good to have Unanimated back for their second renaissance. Whilst Annihilation is not the comeback one would have hoped for, there’s enough about it that it wouldn’t be a surprise if there was a leap in quality on future output. Here’s hoping that leap is on the forthcoming album.

Highlights: “From a Throne Below”

Find out more on Unanimated here:

Annihilation is available on August 10th via Century Media Records, and can be purchased here.