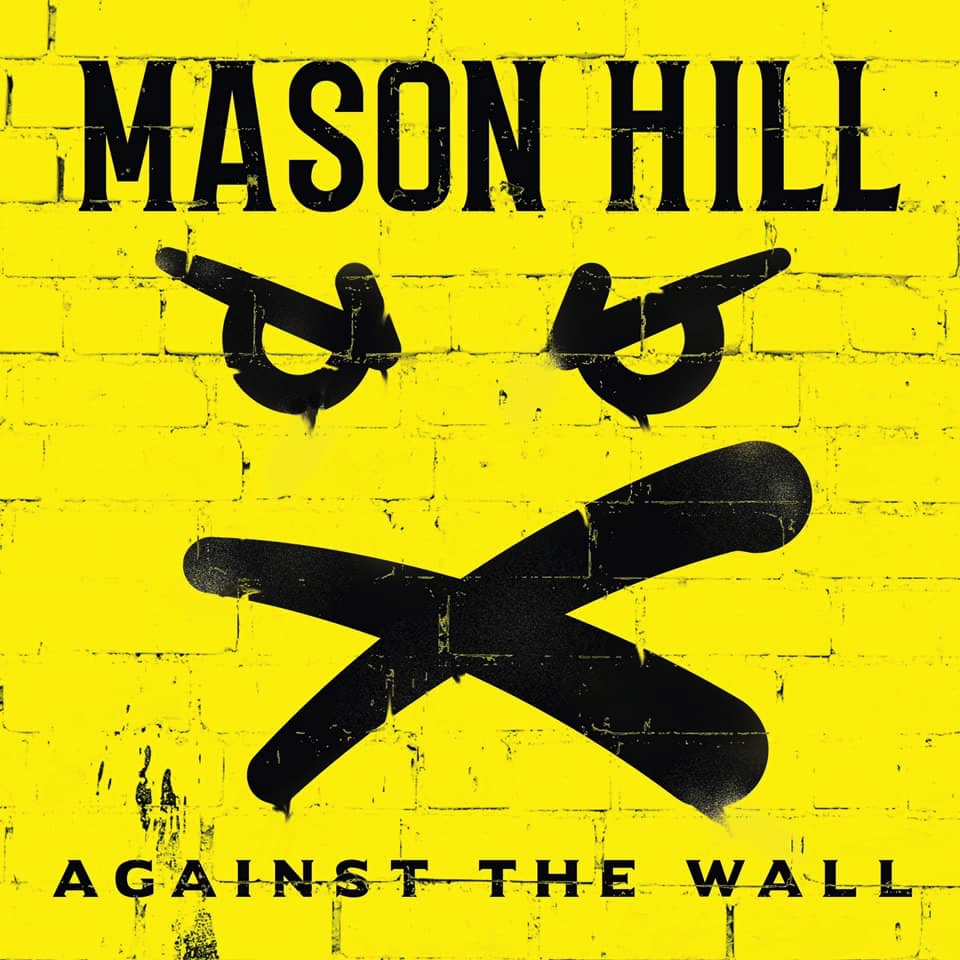 Long awaited is a bit of an understatement for this baby. Over seven years in the making and after a successful kickstarter campaign, Mason Hill have finally delivered their debut album ‘Against The Wall’ and have spent the last few days promoting the hell out of it. I watched the NWOCR Webfest acoustic set, last Friday night and the bands own film , where they played a few songs plugged in, on Saturday, so it’s been a bit of a Mason Hill weekend ! Read my review of these shows the link at the foot of the page.

Vocalist Scott Taylor and guitar prodigy James Bird have known each other since their school days in Glasgow, it was in 2013 that they decided to form Mason Hill. The rest as they say is history, the band have gone upwards and onwards, overcoming every obstacle to mature into the 5 piece they are today. Having toured with the likes of Graham Bonnet, Snakecharmer, Toseland, and Inglorious as well as being on major festival stages such as Steelhouse, Ramblin’ Man Fair, Download and Winterstorm. They released an eponymous EP in 2015 which was well received and since then have remained firm favourites with fans and media, being one of the best live bands on the circuit. Last year Mason Hill joined Jaba Music and 7Hz Productions, so management and a record deal were sealed.

There’s a lovely short introduction entitled ‘Reborn’, to this album. It lays the way and creates an atmosphere of anticipation for what is to follow. ‘No Regret’ is a layered track, under all the superb vocals by Scott Taylor is a base of low, grunge riffing guitar, by James Bird and Marc Montgomery with tweaks of powerful chords, that descend midway for a deluge of fret indulgence. The title track is more subdued, with gentle melody and that Mason Hill signature ‘chime’, before launching itself into one cosmic riot of a chorus. Crashing and bouncing all over that wall, this is a well balanced and complete song, it was also the first single back in September last year. ‘Broken Son’ slows it up a little, having a fiery and flowing pace. There’s another brilliant guitar solo, before the stomp continues until the final notes. Out as a single in January ‘DNA’ is an explosive experience to say the least. The initial riff is intertwined with another hook of a chorus and along with the pulsating rhythm, this is one that remains embedded in that space between your headphones. The ballad ‘Who We Are’ drifts and swirls along like a meandering stream. Delicate and simple, it’s a mesmerising journey and a reminder that we all stand together in the world.

‘Find My Way’ is more racing riffs and takes a heavier direction, no surprise it’s the one the guitar duo love playing live. There are some backing vocals and ‘whoas’ to add flavour and bonding and a punishing axe fist-fight takes it out. A serene and tranquil introduction to ‘Hold On’ is soon demolished with a thudding melody. Lovely lyrics, high vocals with locked and loaded guitars, I adore the mixture and the way it goes into overdrive to finish. ‘Out Of Reach’ has a tinge of G’n’R/Slash twinkling, that gives it endearing affection. The power and drive increases as we get James Bird displaying his awesome talent and it fades with more of those warm and beating keys. ‘We Pray’ is more direct and is more a crash and burn type. Twisting strings, those low riffs and Scott’s harmonies, give it more of an edgy persona. ‘Where I Belong’ will be the most beautiful ballad you hear over the forthcoming months. It proves how much Mason Hill have matured over the last few years, they definitely know how to capture and hold the moment. The guitar screaming until it is nearly out of earshot, confirms why Bird is held in so much esteem. ‘Reborn (Reprise)’ is a brief coda, that takes us out of the loop, it brings us back down to earth, after this incredible encounter called ‘Against The wall’.

It is without any doubt that Mason Hill have released the NWOCR album of the year, it’s at number 6 in the official midweek charts as I write this. That is some effort and no words are really required, to say how extraordinary this is for a young rock band, in this country. All links to the social pages can be found below,  that include how you can order a copy of the album and where to see them live.

‘The NWOCR album Of The Year’

Highlights – No Regret , Against The Wall , DNA, Where I Belong

Tracks – Reborn , No Regret , Against The Wall ,Broken Son ,DNA, Who We Are ,Find My Way ,Hold On,  Out Of Reach ,We Pray, Where I Belong ,Reborn ( Reprise)