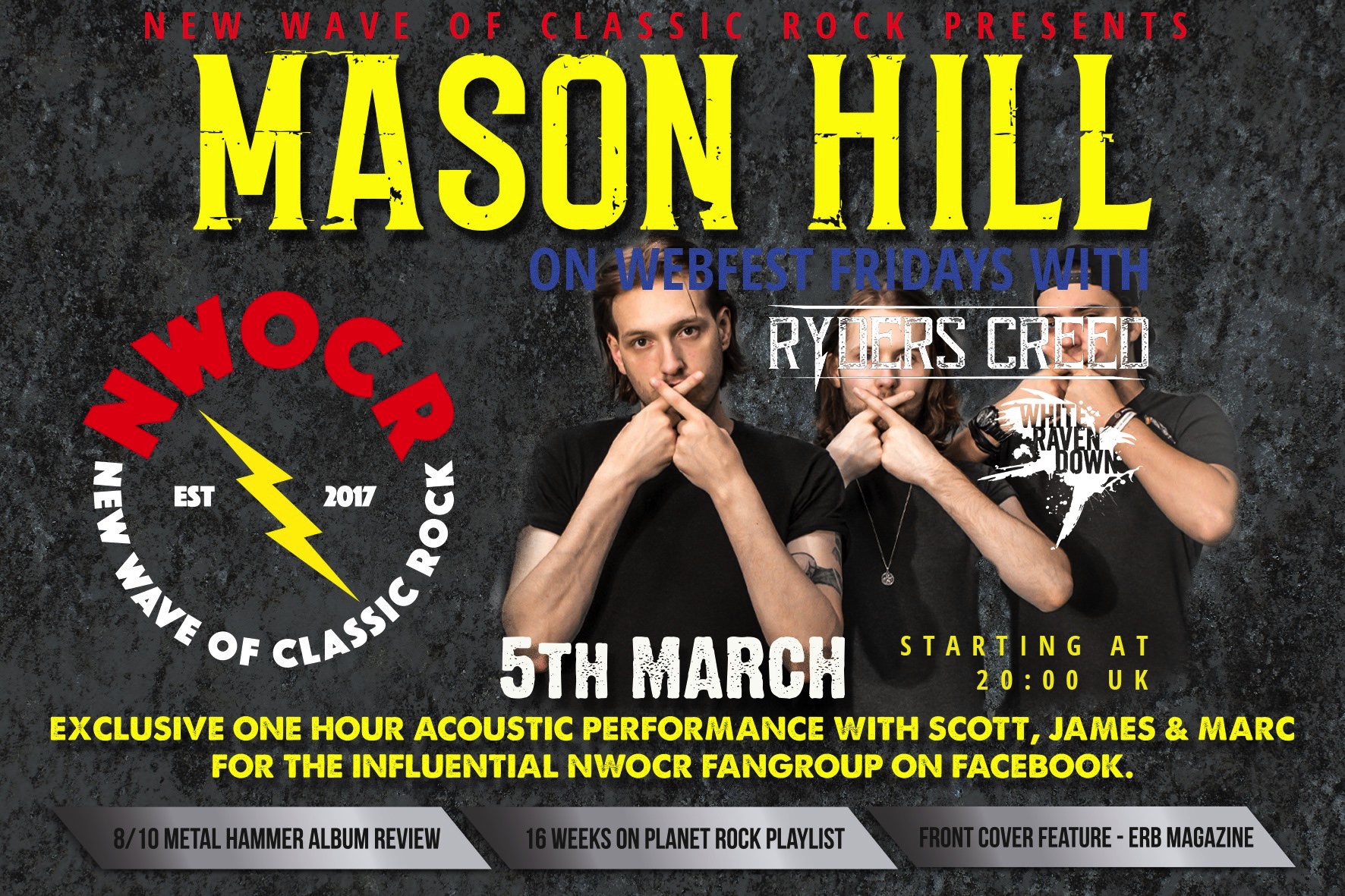 It was the start of a Mason Hill weekend for many of us on the 5th March, especially those who follow the NWOCR band. To coincide with the album launch of ‘Against The Wall’, there was an acoustic set on Friday, when they headlined the NWOCR WEBFEST. Then an electric set, on their own facebook site on Saturday. Hard to keep up, as the guys are fully stoked at the moment, so I’ve decided to do a Mason Hill bundle covering both shows and the album !

I think Anne Estella is amazing, she manages to interview bands with such ease. She talks to White Raven Down, we hear how they have been putting the final touches to a new album and how difficult it has been during lockdown, as they are miles apart from each other and their producer. I cant wait for its release and they have also just announced that they are joining  Häxan on their UK tour at the  B2 VENUE NORWICH on Friday 23rd July 2021. Get your tickets here: https://bit.ly/2O3VWlz . We watched the set from a past Webfest of 5/7/20, which was made up of  ‘Mind Reader’, ‘Broken Door’, ‘Not Alone’, All Day Long’, ’Take Me’ and ‘Salvation’. If you like the heavier, Grunge style of rock be sure to check them out at WHITE RAVEN DOWN

The charming Ryan Antony Hulme, introduces us to his band’s set, five tracks that reflect the grace and soulful style of  RYDERS CREED , their album ‘Lost Souls’ was one of the best releases last year. Filmed with a green screen, the final effect is really stunning and is again taken from a past NWOCR Webfest. The latter team have been remarkable, hats and caps off to Jeremy, Richard and company for keeping us entertained these recent Friday Nights. Check out more shows and all that is NWOCR  HERE .

Anne returns to have a quick chat with the Mason Hill guys. They talk about the many obstacles that have delayed bringing out an album and the blood, sweat and tears it has taken to see it through. It’s been an epic journey of 7 years, although some tracks are even older, they joked it would be out in 2021, never realising it would take so long. Vocalist Scott Taylor appears on screen to introduce us to their show and all the latest news, before we are taken into the filmed acoustic set on the split screen. ‘No Regret’ with it’s warmth, comes across well and the precise strumming continues on ‘Hold On’. James Bird is a wonderful guitarist to watch, effortless control and faultless talent. Accompanying him is Marc Montgomery, who announces the next song, a cover of the Foo Fighters ‘Best Of You’. A beautiful song, this is cleverly replicated and Scott goes to the peak of his range to deliver incredible vocals. It’s a breathtaking version and not on the album, I must add. James introduces one of their oldest songs ‘Out Of Reach’ with its ‘chime bell’ chords and simple melody. Again we witness an extraordinary piece of musicianship. Marc introduces his favourite track ‘DNA’ and there is more of a combined punchy rock, feel about it. It does have a singalong vibe about it, actually you are singing along to ‘DNA’ before you realise it !

The first ballad is ‘Who We Are’ with its slightly uplifting take on traditional lines. We see a short film with the band signing the albums, which are numbered and limited. Then another cover with Phil Collins’ ‘In The Air Tonight’ they say it was an unusual one to choose, but hell what a superb choice and it makes every hair stand up on your body. Again not on the album, but if the fans get their way these acoustic songs will be released on an EP for sure, as they are too good to waste. The bouncy and flowing ‘Broken Son’ is on the album and I love the way Scott looks so relaxed, he’s in his element and smiling between the lines. There’s also an excuse for James to pick up the Gibson, for a short solo and I spotted a cheeky grin! Last but not least, a ballad of immense popularity among Mason Hill fans, ‘Where I Belong’ one of the best slow movers you will ever hear. Tonight it’s from the heart and there’s another chance to sample James plugged in, providing some of the coolest guitar this side of heaven. Finally there are thanks and goodbyes from Scott, who is still beaming. Nailed it guys like a trigger happy nail gun.

Well to carry on the celebrations, Saturday is all about playing an electric set with some guest appearances thrown in. A black and white version of the album cover is flashed up on the bands facebook/ Youtube screen and we dive straight into ‘We Pray’. With all the band present for this event, the energy pours out from the onset. A multi screen display, with the band in their separate living rooms and drummer Craig McFetridge in what looks like his attic ‘DNA’ follows, which is one of the fastest off the new ‘Against The Wall’ album. The electric version, is of course much fuller and groove hitting, what an ear worm of a number. Barry ‘Baz’ Mills of Massive Wagons, pops up to chat with James and bassist Matthew Ward to discuss the trials of making the record and lockdown. ‘Who We Are’ is introduced by James who tells us how poignant the song is, given what we are going through with the pandemic at the moment and how we should stick together through it all. Has to be one of the best songs on the album, I like the faint ‘traditional Scottish’ sounds you can just manage to pick out.

Danny Bowes appears, has a quick chat and reminds us that the band on on tour with Thunder next year. Drummer Craig announces ‘Against The Wall’ this is a full on, in your face, supremo rock. Just try and keep still to the chorus, it’s impossible. Up comes Dante Gizzi from Gun and the fellow Scot, reminds us of the album release. Scott tells us that ‘Out Of Reach’ is Ten years old and I guess they have been playing it for the same amount of time, but it’s a peach of a track. Guitar echoes with so much resonance and reverb, it’s no surprise Mason Hill are one of the best bands to see live. There’s a catch up with record producer Chris Sheldon who has worked with the Foo Fighters, Garbage, Feeder, Therapy? and Biffy Clyro in the past.  Chris, who mixed the album, stresses how much positive feedback he’s received especially for ‘DNA’. Dan Reed is the next guest to give a quick plug and then Marc Montgomery says a little piece before heading to his bar ! Last up is ‘Find My Way’ heavier and with killer riffs, no wonder it’s one of Marc’s favourites.

Excellent stuff and it’s been a joy to watch. Loads of positives on the live chat bar, (which is great way to catch up with friends) and Mason Hill, well you can see it on their faces , proud, happy and 100% pumped up at the moment, as this has been about 7 years in the making. We hang around for over another hour, as the band chat, drink, joke and answer questions. Phew what a couple of nights this has been.

Mason Hill will appear at the Steelhouse Festival in July, Nozfest in August and have announced a headline tour in September. See their Facebook page HERE to keep up to date.

For the ‘Against The Wall’ Album review click  – HERE