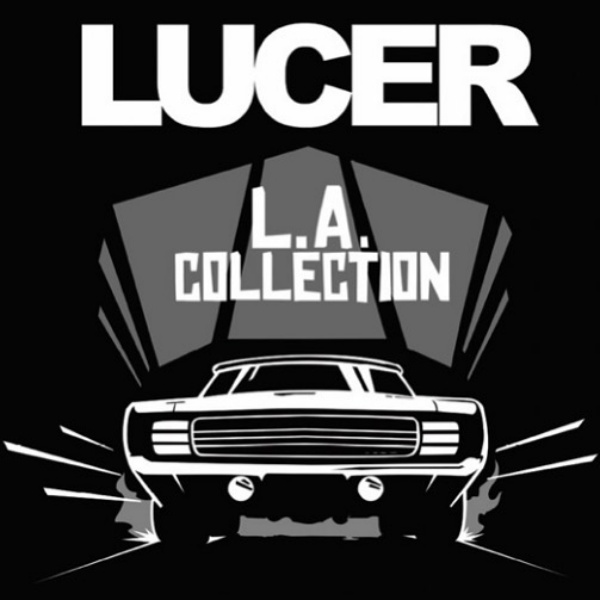 If you are a recent Lucer fan you will be slightly taken aback with this latest album. Why you ask ? Well the Danes are a rock band, but since they changed their name from L.A. Collection, they have been on the more moderate edge of the genre. Albums ‘Bring Me Good News’ from 2015 and ‘Ghost Town’ as recently as 2019, can be described as more Alternative or Techno rock. Maybe the influence of Mike Tramp ( White Lion, Freak Of Nature ) who previously guided the young Bøgemark brothers and their friend Jonathan Nørgaard, led them into a different direction. Then again they did an awesome cover of Cliff’s ‘Devil Woman’ around the same time, that speaks volumes for their versatility. Lucer have now decided to return to the’ L.A.Collection’ days and release tracks from the dawn of their career, with a couple of newer songs thrown in for good measure.

Opener and the first single ‘Make My Getaway’ is a groove based, stoner rock number. It’s full of those intoxicating, bluesy layers with prime guitar strumming and scratchy vocals, allowing it to fit in and alongside all the other newer bands, that emit that Southern US style of swamp rock. ‘Living On The Line’ follows it up perfectly. More punchy and messy Southern Blues, with those sawdust rinsed vocals. I love the guitar sound, the rumbling and deeper chords give the track so much appeal. Two songs down and I’m loving Lucer. ‘Roll The Dice’ was the second single and the pace has quickened, we have more of a wilder approach. Ok, I like the change in tempo and again the guitars are awesome, plenty of rapid fret and a bit of classic Angus Young behaviour, to boost your metabolism.

I suppose the title ‘Vintage Rock’N’Roll’ gives the game away. A classic sound, early AC/DC & Rose Tattoo and the band make no excuses in paying homage to their initial influences. From now on the album stays in this vein of classic Aussie style stomping. ‘Dead Mans Walk’ and ‘Dirty Job’ are both from around 2013 and the latter in particular is a head-banging spectacular. Rough and ready with razor sharp banter from Lasse Bøgemark, who also handles bass guitar. Drums from Jonathon Nørgaard are so well executed, you can feel the vibrations on your face. Yes, it’s a dirty job, but Lucer are able to do it.  I guess it’s a Danish version of ‘Dirty Deeds’, with it’s unpolluted classic rock style, so it does have something quite adhering about it. Remember when we used to boogie ? Lucer replicate it with ’Straight To The Bone’ which continues with a strut. The screaming dual chords from guitarists Anders Bøgemark and Kristoffer Kristensen are faultless. ’Stabbed In The Kneecap’ is also delivered in the same basic and uncomplicated manner, this is going back to the classic rock formula that many of us oldies were initiated with and it’s awesome to hear it from such a young band. Very much like how ‘The Treatment’ write, it’s taken back to ground level and stripped down. ‘Out Of Touch’ ends L.A.Collection, it’s a slower and thunderous piece with a stack of clever hooks and twists.

Not being that familiar with Lucer before listening to this new release, I was instantly a fan after the first two tracks. Then as we rode on and the older songs were belted out, I did get to ponder why add different styles on one record ? Now I do like what I heard and L.A.Collection is a fine listen, very clean and great for a party. But I think they need to decide which direction they take next, either more like ‘Make My Getaway’ and ‘Living On The Line’ which as I said are groove/stoner brilliance, or go back to their roots and the classic rock sound, that they also bash out so well. There is room for both styles and actually either are more absorbing and likeable, than the two previous albums mentioned.

‘A bit of classic Angus Young behaviour, to boost your metabolism’,

Highlights – Make My Getaway, Living On The Line , Dirty Job.

L.A.Collection was released for streaming on June 11th

and will be released on Black vinyl on July 30 via Mighty Music / Target Group.

Tracklist: Make My Getaway. Living On The Line. Roll The Dice. Vintage Rock’N’Roll. Dead Man’s Walk. Dirty Job. Straight To The Bone. Stabbed In The Kneecap. Out Of Touch