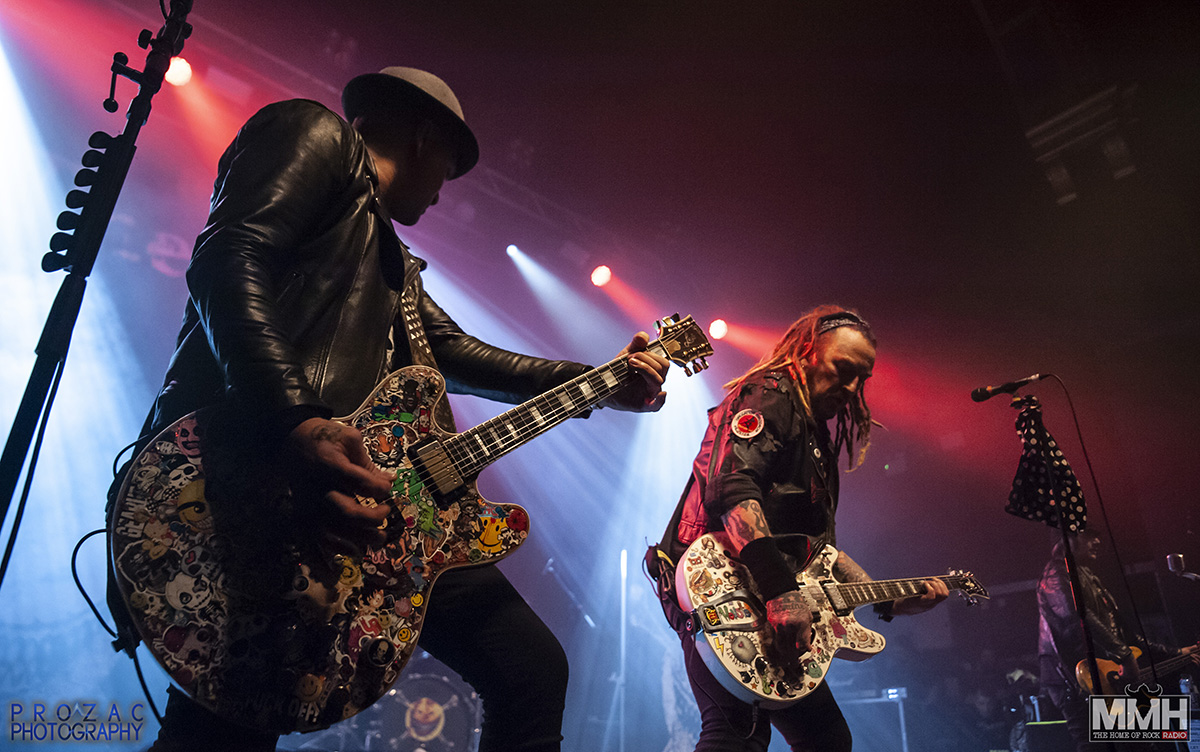 Early doors at the Birmingham 02 Institute tonight as there are three bands on. Of course most routes into Digbeth are closed due to roadworks, so I have to rely on the SatNav. However, only a little late and there’s still plenty of time to catch up with a few mates before the show.

CKY ( Camp Kill Yourself ) are a new band for me, as I was never passionate about the Skate Park genre and those type of bands around the late 90s, they were a far distance from the stuff I was listening to those days. The CKY of 2020 are down to a duo, Chad I Ginsberg on guitar and vocals and Jess Margera on drums. It’s quite frantic as they open with ‘The Human Drive (in Hi Fi)’ that was on the debut ‘Volume 1’ album in 1999, naturally there are a few steadfast fans down the front, chanting along. After a couple from ‘Infiltrate,Destroy, Rebuild’ from 2002, ‘Sporadic Movement’ and Attached At The Hip’, you have to admire Ginsberg for his enthusiasm. Margera is a competent sticksman, he is constant and the more recent ‘Replaceable’ from 2017 has a more harder edge. ‘Head For A Breakdown’ also from ‘The Phoenix’ album of 2017, is a muddy, softer song. Back to earlier times with ‘Rio Bravo’ is very post grunge, loads of anger released and some potent detuned guitar. They end on ‘Escape From Hellview’ and get a warm applause from the Institute. Sadly I think I’ve missed their best years.

BACKYARD BABIES are one of the best bands to watch live, who don’t go to extraordinary lengths with stage effects. A few flashing lights and some smoke to bask in, is all they need. Another band that were around in 1998, but these, unlike CKY, I did see back in the day and I have always been a firm fan. Hard to categorise them, I suppose heavy punk/sleaze rock, Viking style, is the best description. After the Sex Pistols intro ‘Friggin In The Riggin’, the band take to the stage. With a back catalogue of 8 studio albums to choose from, the Swedes pick ‘Good Morning Midnight’ to start, a massive track from the recent ‘Silver and Gold’. Straight into ‘Thirteen Or Nothing’ from 2015 and already the Backyard Babies are in control, stacks of strutting and running around from Dregen on lead guitar.  ’Shovin Rocks’, has a catchy chorus and we all join in. Have to agree the Stockholm based quartet are a perfect support for the Wildhearts, another older number ‘Heaven 2.9’ is dealt with, after frontman Nicke Borg has encouraged the audience to participate, as we do.

The interaction continues, Nicke with his friendly bants and even bass player Johan Blomquist helps out, engaging with the front row. After ‘Highlights’ we have the slightly demure ‘Abandon’ whereby Nicke woos us into submission. ‘Look At You’ is a pure punk ridden bop, Peder Carlsson on drums steps up to deliver a pounding. They mix it up more with ‘Dysfunctional Professional’ and ‘Minus Celsius’ gets a rapturous welcome. There is no let up, even at the end ‘People Like, People Like, People Like Us’ a favourite since 2006, blows the roof. Excellent band and another exhilarating performance.

THE WILDHEARTS are a national treasure, Ginger really created something unique back in 1989. Come the mid 90s and those embodied  days of ‘Fishing For Luckies’ and ‘Earth Versus The Wildhearts’ we were captured, you had to adore them. Last year their comeback album ‘The Renaissance Men’ was one of the best to hit the charts, tonight we hear a few from it, but the set is a mix of old and new. The intro tape ‘Don’t Worry About Me’ sums the Geordies up, resilient to the end and it’s so good to see Danny McCormack back up there. ‘Everlone’, ‘Vanilla Radio’ and the pleasing ‘Caffeine Bomb’ with newbies ’Diagnosis’ and ‘Let ‘Em Go’ are presented without flinching. Ginger, despite many ups and downs over the years, stands proud on stage, he’s worshiped like a Geordie demigod. ’TV Tan’ and ‘Top Of The World’ carry on, all guns blazing. Lots of humour of course, Ginger and Danny have built up a fine repertoire over the years and there are plenty in the crowd who are pointed out and acknowledged as friends. ‘Dislocated’ and ‘My Kinda Movie’ from the new LP, are proof that the Wildhearts have lost none of their creativeness, both stormers.

The Backyard Babies join the band for ‘I Wanna Go Where The People Go’, all good fun. No Wildheart gig is complete without ‘Geordie In Wonderland’ which ends the main set and is a bit of a singalong. The encore sees a trio from 1993, ’My Baby Is A Headfuck’, ‘Suckerpunch’ and a finale bow with ‘Love U ’Til I Don’t’. The Institute erupted tonight, I haven’t seen so many happy faces for ages.

Tonight was the last of part one of the tour, part two commences in October.  But the Wildhearts have many appearances this year, for more details see the FACEBOOK page or official WEBSITE .

More Photos of the show HERE