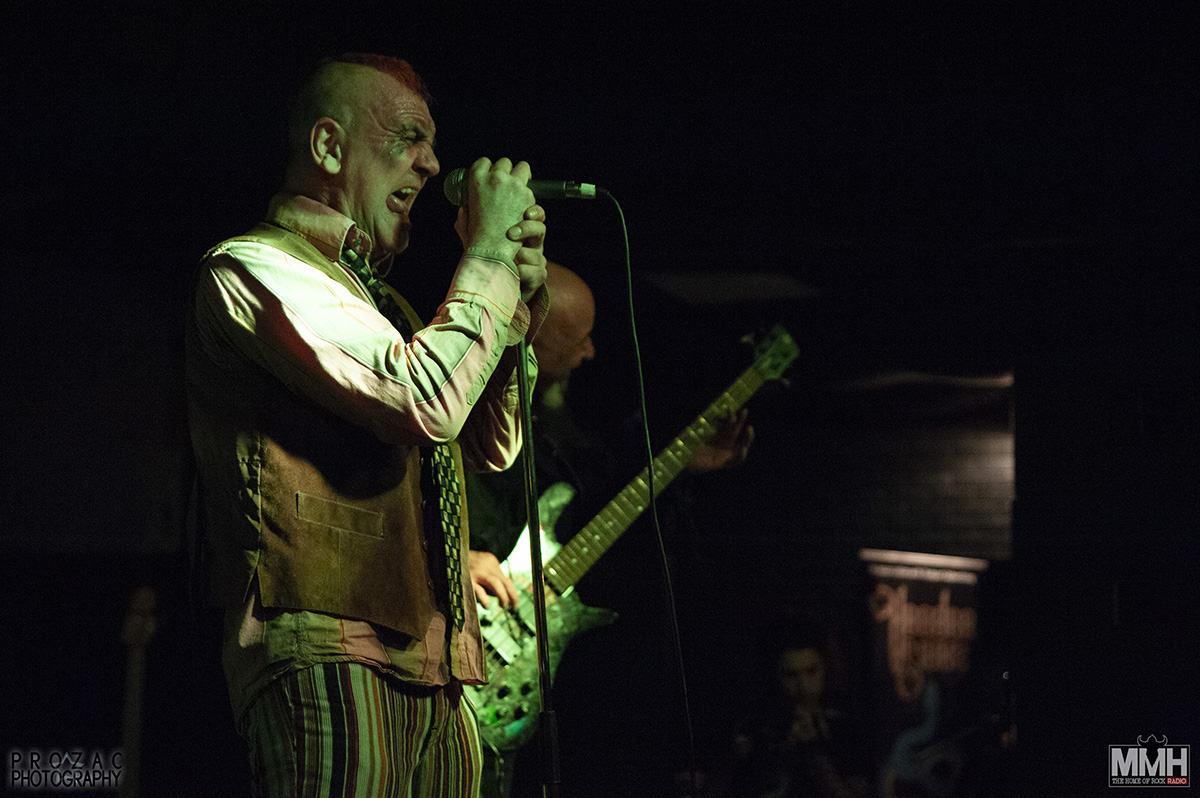 The popularity of Voodoo Sioux hasn’t waned at all over the years and they have been going since 1991, although they did have a hiatus starting in 1997 for twelve years. Judging by the people wearing VS T-Shirts tonight, they have fans of all ages, that’s always a good sign. The room was filling up nicely as soon as the doors opened and Bill Sneyd, their long time Manager and also in charge of the merchandise tonight, hardly had time to breathe, as the sales were nonstop.

I had no idea who the support was before getting here. Cower, Hounds! I finally discover is the name of the Walsall based trio, however, there were some different versions of their moniker flying around before we got to the truth. Actually I think the Cower,Hounds! enjoyed the confusion, judging by their love of dark humour. Read about them on their social pages and you are led to believe they formed in 1930 and led a life of crime, until their demise at the hands of the US Police at a road block in Louisiana. Besides spoof news, they also have a fondness for old game consoles, as seen on their videos.

On stage at the Station we are in the presence of British Grunge with the Cower,Hounds!, vocalist/guitarist Paul Reynolds is joined by Andy Ford on bass and Ex LunarMile (Alex Hill & Toni Marie Iommi) drummer Rob Stimpson. ‘Lets Get A Dog’ has a moody hook to start with. ‘A.I.M.’ is more simple and stoner grunge based, Paul adds mellow vocals and we have a Seattle vibe in the heart of Cannock. The guitar on ‘Sad Exorcist’ has more pace and by this time, the crowd are getting well into it. With more obscure titles like ’Stabby One’, ‘Grungy One’ and ‘Tempo Deaf’ on the laminated set list and aware of their love of fake news, I dare say these are numbers that stem back to their outlaw past in the USA. Whatever the song titles, it was a delightful set and they came across 100%. I really liked them and must get another fix soon.

The Cower,Hounds!  are appearing at The Old Foundry in Dudley on February 15th, with Parson City and The Red Widows, headliners are Gévaudan. Doors 8pm and Free admission, thanks to Rock The Foundry Promotions.

So we come to headliners Voodoo Sioux and the album launch for ‘Professor Balthazar’s Psychedelic Medicine Show’. The title conjures up those travelling Snake Oil pedlars from the Wild West, but we have four old charmers from the West Midlands. Starters is ‘(Falling Off The ) Edge Of The World’ a great singalong to get us involved from the off. The Station is packed now, there’s a party atmosphere, the drinks are flowing and we are listening to the revving sounds of ‘Pillow Talk’. Dirty guitar from J.B that seems to crawl, it’s that low and vocals care of Nikki Flaherty that are so resonant are poured together for this little gem.

‘Running On Empty’ is another with messy guitar, but more old school rock with a scream of a solo from J.B and a stash of bass from Mario Ermoyenous to give it some weight. ‘Jesus Christ’ is one of a few that may already be familiar with the Voodoo Sioux fans, having previously been on demo’s, but now given a fresh coat. Nice bit of banter follows with the audience, many are close friends as well. ‘Indian Summer’ changes the mood, quieter strings and time to hear Nikki produce some astonishing vocals. There is still guitar damage, as the song builds to a crescendo, quite a showpiece. ‘Happy Valley’ and ‘Pandora’s Box’ are both well received, newer songs from the band, before the lively ‘Legend Has It’, drums from Nigel Halford (Brother of Rob) are foremost here.

It has to be said Voodoo Sioux are also entertaining to watch, although Nikki and company are dressed more soberly tonight and there is less of the warpaint. ‘Into The Garden’ that came out as a single is a gentle ballad and is given a semi acoustic touch. ‘Backwards To Babylon’ gets us back into overdrive, succulent guitar and a hints of decadence that the band often portray. ‘(You Wanna Make Me A) Better Man’ is another with catchy lyrics to join in with, it just swings along so elegantly. The set doesn’t diminish towards the final few either, the hard hitting ‘Damage’ with its sharp riff, the cleverness of ‘Mozart In Reverse’ and the easy lines of ‘Mister Smith Or Jones’ are all belted out to the Station’s attentive audience. ‘Alias The Jester’ is the final fling, with a blown tube, how rock and roll is that ! Nevertheless, the sound was sufficient for us to be totally entertained.

There are also a few shows in the West Midlands coming up, see the FACEBOOK page for updates.