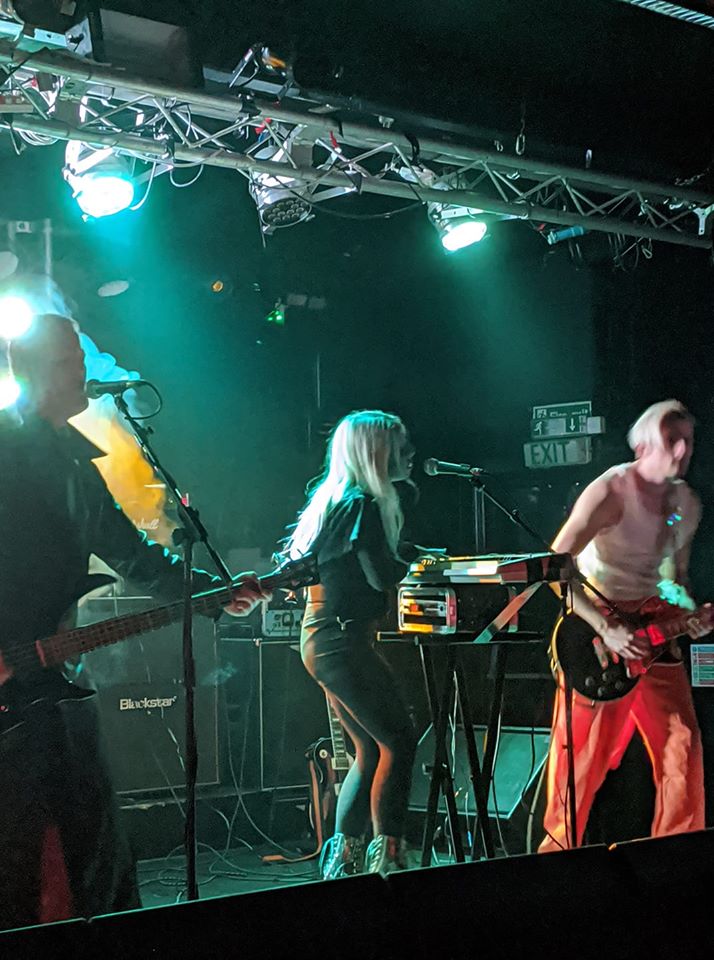 You’ve had masks, pirate costumes, face paint and the rest from some of the biggest names in rock and metal. But I don’t think I’ve ever seen a cast with thoroughly thought out personalities, backstories and new identities. From blue skin to pink hair, The Fangs of the Dodo first seem like an unlikely bunch. But sure enough, the crew took to the stage at The Craufurd Arms to give us a taste of what they’re made of.
Adorning a full-length leather coat, Count Dodo invites the crowd to come closer. Accompanying him are some other interesting characters, which, together, makes up this band of otherworldly progressive outcasts.
It feels like a long time since I’ve seen a band with such character, energy and genuine talent emerge from the hidden alleyways of alternative music. But out from the cracks of Hertfordshire/Bath, these guys jumped straight into the heat of the gig from the first note they played.

Something that I loved about this band was that you feel as though the two vocalists have very upfront personalities which shine through the music. For example, in songs like “Crime of the Century”, Count Dodo takes the lead role and so the music seams to follow suit with an upbeat, cheeky and unapologetic tone. It gets you moving at a live show, and singing along accordingly. It’s very real and very much alive. Then when Cinder takes control you’re taken into a darker world, and the music gets heavier. This seems to also reflect in their music videos; from plotting with the Count to a personified vulture feast.
It’s a great way for a band to explore their full potential, and everything is so well thought out. I’m used to smaller, newer bands having a slightly more chaotic start, trying to explore their sound and implementing what they’re inspired by. But these guys have got it sorted. The studio recorded tracks are impeccable, and I am so happy I got a chance to seem them live at Omni Fest.

The Fangs of the Dodo played a few of their top tracks, such as “Pretty Please” and “Please Don’t Feed The Vultures”, but also dropped in some of their other treasures. “By A Thread” was another one which saw Cinder, our Mystique-like friend, playing the role of lead vocalist, taking us deeper into their underground fairground. The mix of innocent fun and the surfacing of chaos gives this band a real edge, and each track you listen to is a surprise.

In the future, because they are so fluid, TFOTD could really go anywhere they want, and dip into other genres if they wanted to. All in all, the songs are catchy and the whole aesthetic really works for them. I can’t wait see what they do in the future, and how far they go. It would be a nice touch to explore more of their dark world.