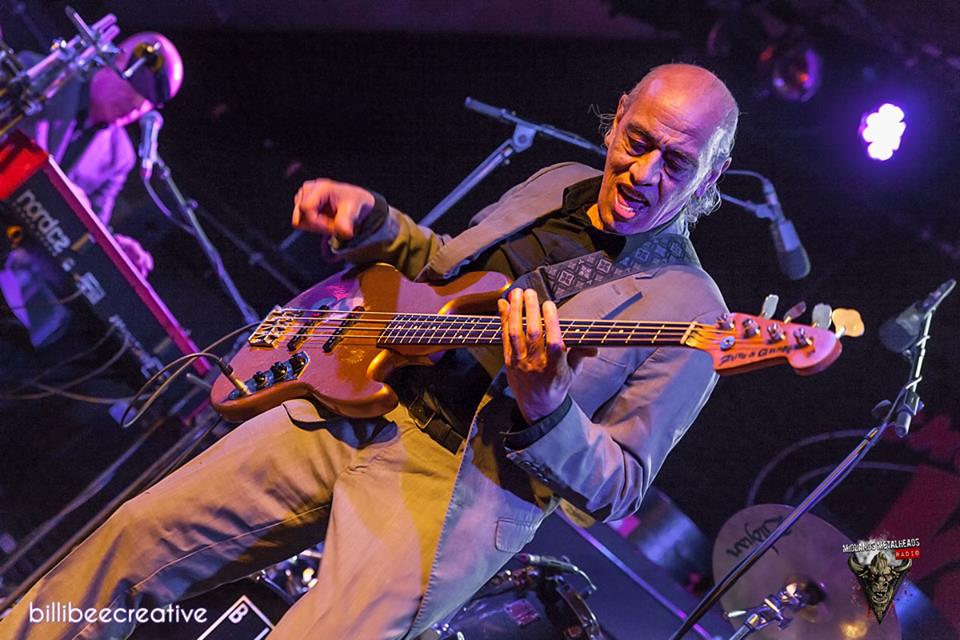 I’ll admit it, Madness was the first band I ever bought a record by and I loved then right through my childhood and teens. Where there was Madness there could also usually be found Ian Dury and THE BLOCKHEADS delivering their own take on quirky London pop. So, it’s only taken me three to four decades to finally see them live, sans Ian Drury of course. Has it really been 18 years since he passed away? The Blockheads at that time endeavored to carry on playing and creating music and they’ve done exactly that, with four studio albums released to my knowledge.

First we have support act DEAD FREQUENCY on stage. A three piece with a pop punk vibe not too far removed from The Offspring, Bowling For Soup and Green Day to my ears. They even include the stadium antics of the latter in their stage show, inciting crowd to sing along, throwing in drums solos and prolonged stadium rock style song endings. Credit is due for enthusiasm and while the headline band style antics are perhaps a little out of place in a small lack country venue, the song composition is tight and well executed.

The crowd are nicely warmed up for the moment THE BLOCKHEADS take to the stage. The mood immediately shifts as if all assembled know they are in the presence of a veteran (sorry!) tour de force of musicians. I mean, some of the band have been professional musicians since the latter 1970s, and not just with the Blockheads but with a raft of other bands from the 70s to present day and also composed film soundtracks and so forth. The teenage me (and even the older me) got a little excited when I read that bassist Norman Watt-Roy played the bass line for Relax by Frankie Goes To Hollywood, a band I obsessively collected for many years.

From the first plucked bass note as they took to the stage, The Blockheads ooze effortless and slightly bohemian cool. They can’t help it, they just do. The musicianship is exemplary and the delivery relaxed but not at all lazy. The set progresses sandwiching the new between the older, starting with ‘Wake Up And Make Love With Me’, from 1977s ‘New Boots And Panties’, an album from which they go on to lift plenty of other tracks. From the 2017 release ‘Beyond The Call Of Dury’ we newer songs such as ‘Hold Up’ and ‘Fact or Fiction’ which blend pretty much seamlessly into the set.

The more well known tracks from the Ian Dury era were understandably well received by the crowd but in particular I enjoyed ‘Clever Trevor’ and ‘What a Waste’. These tracks may not be as well known as the also played ‘Reasons to be Cheerful Part 3’, ‘Sex and Drugs and Rock and Roll’ but they are greats non the less. Font man Derek The Draw does the older material great justice and brings his own suave and charisma to the present day Blockheads. Inter song banter only adds to the charm and poise that this band has. The encore includes the expected and much loved single ‘Hit Me With Your Rhythm Stick’ and also their ‘Blockheads’ anthem, and I imagine that all in attendance went home very satisfied with a belly full of funk, ska and pop gems. A great performance from a genuine piece of pop music history (and present).