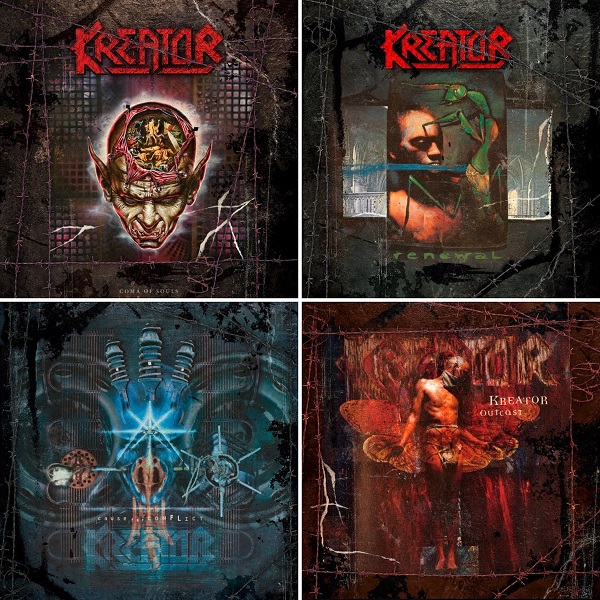 With Kreator’s recent renaissance and the re-emergence of Noise Records, the market was ripe for the reintroduction of their back catalogue. Their albums had been absent from in store shelves for a long time, but last year saw the start of a reissue process that included their first four studio records. 2018 sees the release of a second set of remasters, this time featuring an all time thrash classic and three more experimental affairs. We take a look at all four albums and see if they’re worth your while, whether you’re a long time fan or new to the legendary group’s music.

Kreator had started life as a sloppy, primitive thrash three piece as part of the Teutonic trio in the mid ’80s (alongside Sodom and Destruction), gradually progressing to become a more a technical, melodic and accessible (comparatively speaking) act as the ’90s approached. The legendary Scott Burns, having already worked with the band on Extreme Aggression (which was almost a dry run for this classic) gives the album a familiar feel as far as production and mix goes. This reissue sounds a little fuller and bottom heavy, but there doesn’t seem to have been much sonic tinkering (not that it was needed, as Burns’ original mix was sublime). The addition of Frank ‘Blackfire’ Gosdzik from compatriots Sodom is where Kreator really upped the ante, with his wonderful lead skills employed to superb effect (just listen to the dazzling solos on the likes of “Agents of Brutality” and “Terror Zone”). Marry that fretwork with a procession of incredible riffs, melodic leanings (“Terror Zone” is pretty much melodeath before melodeath existed) and the mercilessly metronomic rhythmic charges of Ventor, and you’ve all the ingredients for the perfect thrash concoction.

The 16 track live set here is the real jewel in the crown in this latest wave of remasters. It’s a little rough around the edges, with Mille’s vocals sounding a little tired in spots (particularly on protracted screams) and a few instrumental mistakes popping up (eg the solo in “Betrayer”), but it’s these defects that give the performance a more authentic charm, as it’s still a blistering show, warts and all. Well… mostly blistering, as whilst a large portion of the set is performed at the sort of breakneck pace you’d expect from thrash’s finest, there are some songs that are laboured in parts (“Terrible Certainty”, “Coma of Souls”, “Riot of Violence” and the chorus of “Pleasure to Kill” the prime examples). Conversely, Endless Pain cuts “Flag of Hate” and “Tormentor” are vicious in their delivery, whilst  “Terror Zone” and “Agents of Brutality” are right on point with their harmonious fury. Despite some minor flaws, it is a great addition to the album, and one that Kreator fans should be eager to get their hands on.

Following up Coma of Souls was always going to be an exercise in futility. With thrash in its dying throes, the aptly titled Renewal arrived in 1992, with the band assimilating industrial and minor hardcore influences to go with their trademark thrash. The uneven production style is a true oddity, with the muddy guitar tone robbing the guitars of power and clarity (particularly the faster parts), but helping to give the album a murky atmosphere that is truly unique. Ventor’s snare is pushed right forward in the mix, with every strike a hammer blow that leaves your brain bouncing around your skull (even more so now on this remaster). It’d take a full on remix to fix any production issues some might be bothered by, but to do so would also rob the album of its charm and character.

We are given a glimpse of how such a remix of Renewal might have sounded with a more conventional production in the form of one of the bonus tracks. The new mix of “Europe After the Rain” is a lot cleaner than the 1992 original, and may leave fans clamouring for more reworkings in this style (assuming the source recordings are available). The other bonus tracks are culled from 2000’s Past Life Trauma collection, although that, like Renewal itself, disappeared from stores long ago, so they’re a handy addition here.

Cause for Conflict is a unique entry in the Kreator canon, being that it is the only album not to have Ventor behind the kit. Ex-Whiplash sticksman Joe Cangelosi took up the position, offering a much more technical performance that lacked the straightforward subtlety Ventor brought. His over exuberant drumming contributes to an energetic but ultimately directionless collection of songs; a mish-mash of riffs that go nowhere most of the time. On the upside, it does have the sort of loose, vicious charm that made Pleasure to Kill so special, although the rhythm section is pushed so far forward in the mix it verges on over powering, something this remaster unfortunately doesn’t fix. There are some highlights (the relentless chaos of “Catholic Despot”, the mid paced chuggery of “Lost” and the moody “Isolation” the tracks of note), but they are dotted around the track list in a manner that prevents the album building any sort of real momentum.

The bonus material here has been available previously on various compilations and special editions (which, again, are scarcely found in the wild), so there will be little for the hardcore hordes to feast on. Of the latest batch of reissues, this is the least essential, both due to the general quality of the material and the lack of any rare bonuses. Not a terrible album… more a forgettable one, and no amount of remastering or reworking will fix that.

I have, for a long time, considered Outcast to be the nadir of the Kreator discography. My stance has softened in recent years, and although I still consider it among the weakest of their catalogue, it does contain a number of great songs. The best thing about the record is the production job, with a clear, concise mix that helps accentuate the heaviness of the simple grooves the group serve up. Out of all Kreator’s albums, this one needs the least amount of work, sound wise, as it’s as close to sonic perfection as they ever got. That the dream team of Petrozza and Coroner axeman Tom Vetterli didn’t concoct a mesmerising thrash-fest to go with the stellar work of producer Vincent Wojno, is disappointing, but I suppose what we got was a sign of the times, with thrash far from fashionable in the late ’90s. There’s an unfortunate mid album lull thanks to a sequence of below average tracks, but said sequence is luckily bookended by powerhouses such as “Phobia”, “Forever”, “Alive Again” and “Against the Rest”.

Much like Coma of Souls, the bonus disc caught my attention more than the album itself, with this one housing their set from Dynamo Festival in 1998. Truth be told, it’s not the greatest of performances, and is surprisingly sloppy in parts (“Terror Zone” in particular). “Pleasure to Kill” is still as savage as ever though; a thrashing ever present even during their leaner years, with the Outcast album tracks also coming across well. “Lost” is the clear lowlight; Ventor’s simplified drum patterns draining the song’s life force considerably. Although they’ve better live recordings, this does present the band in one of their more experimental periods, and for that alone it’s a nice addition to a fair album that will always be overshadowed by the band’s superior works.

Unlike the first set of remasters, all of which contained essential material, only Coma of Souls is a must have acquisition here. Renewal is a unique and rewarding listening experience, but the production style may put off some listeners. Outcast is a bit too hit and miss, but the bonus disc will likely appeal to fans of the group, whereas it’s hard to recommend Cause for Conflict to anyone but completists.

All four reissues are available now, and can be purchased through Kreator’s homepage here. Find more about the band through their official Facebook page.