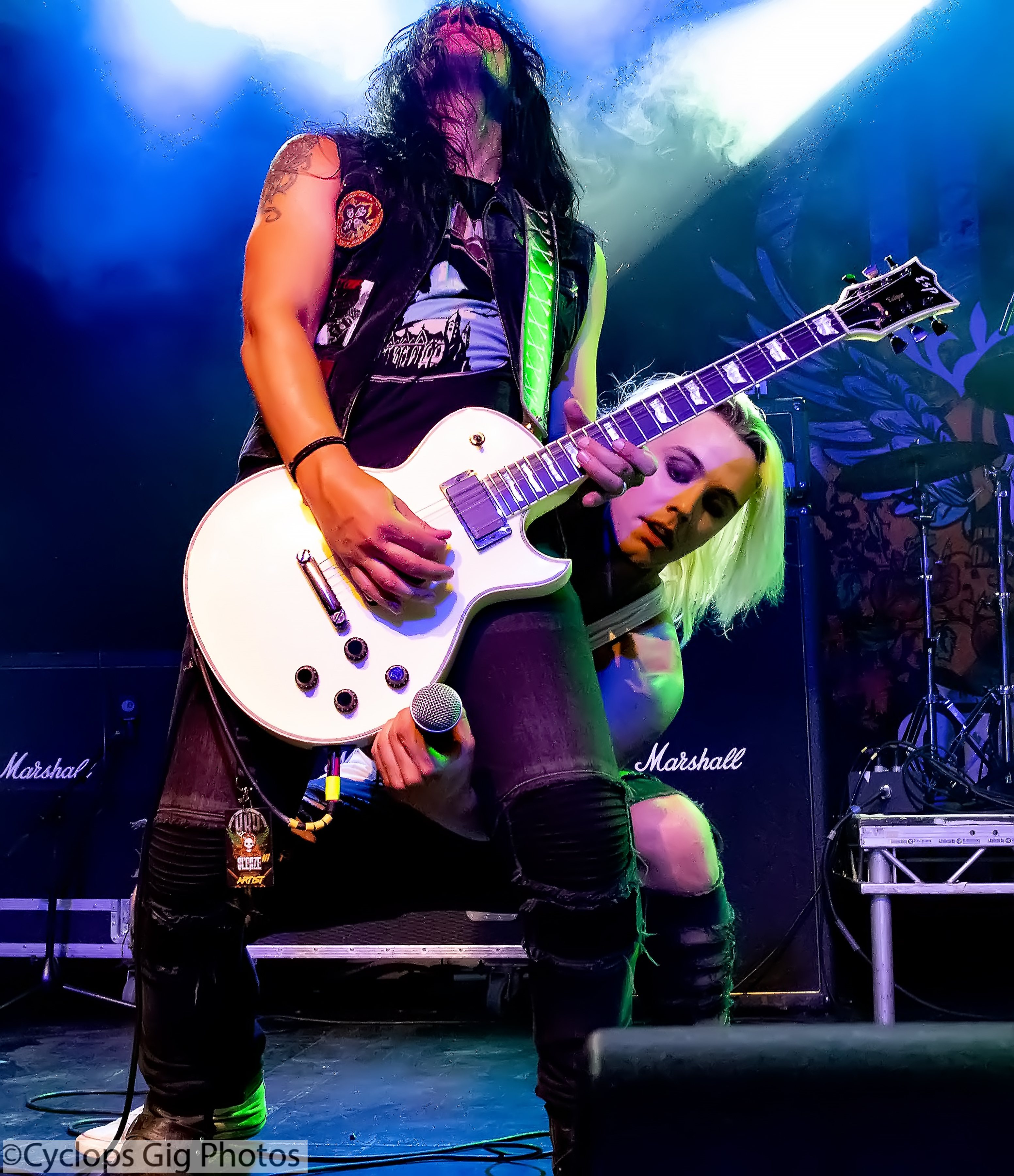 Time to head up to Sheffield again for the annual get together of all that is sleaze. Having arrived on Friday, I watched the 8 bands compete in the ‘Highway to Hell Chapter X’ . Quite a mixture of styles this time and great to check out some new bands who rally were impressive, they may not have won, but ‘STRAIGHT FOR THE SUN’ and STEAL THE CITY’ are a couple I kept a note of. The winners were TWISTER, who deserved to get the award, amazing talent. All 8 bands did superb to reach the final, so a big hand to all of them, for making it an enjoyable night. Well done to DELUSIONAL SILENCE, who were runners up and KING KRAKEN in third place. The other three, BAD POLLYANNA, 3SIXTY and QUIET THE THIEF will undoubtedly gain more fans after seeing them here.

Saturday morning and it’s off to the 02 Academy Sheffield, for the main event, after acoustic sets to warm us up LOVEBITE are on stage 2pm. The Birmingham Glamsters haven’t played a gig since their last appearance at HRH in 2016. Led by the charming Jonny Sparks in his customary reversed baseball cap, you wouldn’t have thought it. ‘Can’t Fight Your Love’ and ’Striptease’ have the crowd in party mood from the start. The cover of Bon Jovi’s ‘Runaway’ is perfect. Nice to see them back up there, keep it going fellas.

TROPHIES OF MAN are a London based band, made up of members from King Lizard, Renegade Playboys and Blackstate Highway among others. The dashing and aptly named Flash Sawyer appears on stage in sunglasses and leather, bashing out ‘Sound Of War’ a real power laden opener. Dan Hills coming in on guitar tonight is excellent and numbers like ‘October’ ‘Back Away’ and Bad For Your Health’ summarise their strong riff filled approach. Liked the cover of GnR’s ’It’s So Easy’, they have been support to Gilby Clarke and do feature a lot in the capital. Give us a tour guys, would love to see you on the road.

I pop over to stage one to see the THE CRUEL INTENTIONS, not easy to see every band as I have interviews to carry out. However, I am in awe watching these Norwegians, rock and roll swagger from Lizzy Devine the former vocalist of ‘Vains For Jenna’ and Kristian Solhaug on guitar. A lot from the 2018 album, ‘No Sign Of Relief’ including ‘Weekend Suffering’, Jawbreaker’ and ‘Check Your Head’. A couple of ‘Vains for Jenna’ songs too, as they play ‘Enemy In Me’ and ‘Get It On’. A lot of happy fans down the front, it was quite a performance. See them on tour around Europe with Crash Diet in October.

Back on stage 2 it is time for THE MAIN GRAINS with Danny McCormack from The Wildhearts. Lovely to see him with this ensemble, they start with ‘Unscrewed’ and the amazing ‘Sock It To Me Baby’ which you can sing along to, even if you’ve never heard it before, it’s that catchy and tantalising. The Undertones ’Teenage Kicks’ and two from Danny’s other project The Yo-Yo’s, intertwine the set. ‘I’d Rather Be In California’ is also a crowd pleaser before they end on the Wildhearts ‘Anthem’. Not sure if the rumours are true but they may have called it a day after this show, which is a big shame. However, watch our interview with them below.

Last on stage 2 are DAX AND ROXANE who are Swiss but live in London these days. I am at the bar chatting to friends, but the band soon grab my full attention. Apart from their own numbers, which provide riffs galore and terrific lyrics, they cover Stevie Wonder’s ’Superstitious’ and The Stones ‘Jumping Jack Flash’, this gives you an idea of their range. Tonight they absolutely blew me away, an incredible show. Will be seeing them again supporting The Dust Coda and Doomsday Outlaw, very soon. Don’t miss them, as since I saw them last year they have come a long way. The new single ‘Interstellar’ featuring keyboard legend Don Airey, is out on 18th September, if you need any introduction.

It’s all on stage 1 now and I have a wander around the floor and bump into more friends, before ROCKY SHADES’ WRATHCHILD start up. ’Stakk Attakk’ is first and it’s classic Wrathchild deliverance for the next hour. Exotic dancers and firing a canon, Rocky and Co glam it up like no other outfit can, ’Too Wild Too Tame’, ’Trash Queen’ and ‘Nukklear Rockket’ all add to the entertainment. Aided by Jonny Suicide on bass and Gaz Wilde on drums, both of New Generation Superstars, the band is completed by Oz Paul on guitar. Finishing in a pile of glory with The Pistols ‘Pretty Vacant’ it reminds me of how varied the rock world is and how there will only ever be one Rocky Shades.

CRASH DIET have just flown in from their native Sweden to be here, formed in 2002 and having overcome the tragic loss of their original vocalist in 2006, they have continued to delight us with their wild and sleazy brand of rock. Singer Gabriel Keyes has been with them 2 years now and fits the part perfectly, having co-wrote the amazing and beautiful single ‘In The Maze’, which is off the new, highly awaited album ‘Rust’. Tonight the hour long set is packed with stoked up, rock/glam originals from these boys and ’Tikket’ gets the ball rolling. The 02 floor is heaving, so many have been waiting for this band to play, ‘Riot In Everyone’ and ‘Reptile’ see Crash Diet produce some fine moves. Martin Sweet on guitar and bassist Peter London, are well in tune with each other while the latest single is given an airing, ‘Rust’ the title track off the album due out on September 13th. The screams from the crowd are loud enough to be heard all over Sheffield, when Olli Herman joins them for ‘In The Raw’ the ex-vocalist now with ‘Reckless Love’, pulls off a blinding performance with his old band. More favourites and pleasers ‘Idiots’, ‘It’s A Miracle’ and ‘Generation Wild’ before they receive a raptuous applause. Crash Diet will return to our shores in December as they join Skid Row on tour.

Listen to our Interview with Crash Diet below

I can’t remember the last time I saw VAIN, I know it was a few years ago. I decided to sit upstairs on the balcony to start with, Davy Vain, barefoot with a white scarf around his head, looked the part, he was always so cool. The set of 90 minutes, contained mostly tracks from 1989 off the ‘No Respect’ album, ‘Secrets’ ‘Icy’ ‘Down For The 3rd Time’, before ‘Push Me Over’ a Davy Vain solo track. I did hear one from 1991, ‘Love Drug’ that was on ‘All Those Strangers’. The second half also consisted of ’89 numbers ‘Smoke and Shadows’, Who’s Watching You’ and the title song ‘No Respect’ before the best known ‘Beat The Bullet’. None from more recent times, which I found surprising, however, by this time I had given up my chair and taken to the floor to get a better look. All in all Vain were good and I know a lot of people really enjoyed it, but for me, I found it a bit tired, especially towards the end.

Midnight and I am off back to the hotel, which is still serving food, after a drink and a chat with a friend at the bar, it’s 1.30am before I hit the sack !

Special thanks to Caz Parker for recording the Crash Diet Interview