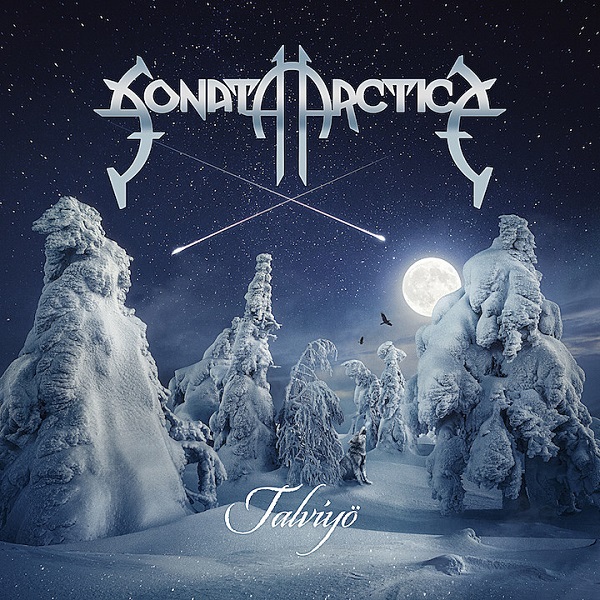 Finland’s Sonata Arctica won the hearts of power metal fans the world over with a string of well received albums in the late ‘90s / early ‘00s, before embarking on a journey of artistic growth that started with 2007’s Unia. They’ve not looked back since (re-recording of debut Ecliptica aside), and in spite of a lukewarm reception to their recent offerings from some quarters, they remain determined to stay their course. Their tenth album, Talviyö, promises more adventurous thrills and spills.

Early signs were not good, as the two pre-release tracks had left me a little cold (pun intended). However, trepidation started to wash away as opener “Message from the Sun” began to gradually unfurl; as traditional power metal song as you’re likely to get from Sonata at this point, it has one of the most delectable choruses you’ll hear this year. It’s by no means a return to Silence or Winterheart’s Guild, but it may satiate the hunger of those who want just that. It is also indicative of the group’s headspace. They have the tools to go on a key drenched double bass rampage, but that is not where their heart is. Whatever you may think of their last few albums, there’s no denying that they have the sound of a band playing exactly what they want to.

By this point my hopes had been raised a little, but unfortunately it’s a case of the best track opening the album. And whilst I’ve been complimentary of the song, it is littered with a few minor, irritating quirks that are symbolic of the muddled song-writing found throughout the record. Although the music here isn’t exactly complex, there’s still a fair bit of detail to take in, and it doesn’t always work. There are a few success stories, such as the dynamic, delicate “Whirlwind” and the glittering, quasi prog “Storm the Armada”, whilst the understated melodies and pop sensibilities of “A Little Less Understanding” fare better under repeated scrutiny. However, for every good song, there’s one or two that simply don’t measure up. “Demon’s Cage” draws you in with an explosive start before morphing into a stodgy, hookless wonder, “Cold” is as listless and anaemic as the band has ever sounded, and “Who Failed the Most” doesn’t take advantage of some atmospheric keyboards courtesy of Henrik Klingenberg. “The Raven Still Flies with You” is the worst offender, molding itself into a pompous, multi part mini epic without an ounce of the quality or verve required to make such a prospect work (and wasting a perfectly good vocal line in the process). Dual ballads “The Last of the Lambs” and “The Garden” are minimalist in comparison to most of the album, but neither are up to much.

I think one of the things that will be scrutinised about Talviyö is the lack of energy. It’s a very subdued affair, although this is not necessarily a bad thing. Tony Kakko doesn’t really push himself, but there’s a warmth and serenity to his vocal delivery that is mirrored by the instrumentalists. There’s an honesty and tranquillity to this calm demeanour, and I feel the music is better for it. Some will probably think it’s too lethargic and is symbolic of a group without passion or direction, but I just don’t think they’re that sort band any more. There are fits and spurts of that blazing gusto, notably in instrumental “Ismo’s Got Good Reactors”, but moments will be too few and far between to win some fans over.

Talviyö is a real mixed bag. There are a few great songs, but they’re outweighed by the more numerous clunkers. There’s a lot of promising tracks that are let down by poor arrangements, and it’s a bit of a mess overall. I’m all for growth and experimentation, and whilst I’m not the sort that’s clamouring for a return of the good ol’ days, I can see why many take that stance given how far Sonata Arctica have fallen. In my eyes, they are a gifted band that has been making subpar music for a good chunk of their career, and Talviyö will do little to change that narrative.

Highlights: “Message from the Sun”, “Whirlwind”, “A Little Less Understanding”

Talviyö is available on September 6th via Nuclear Blast Records, and can be purchased here.