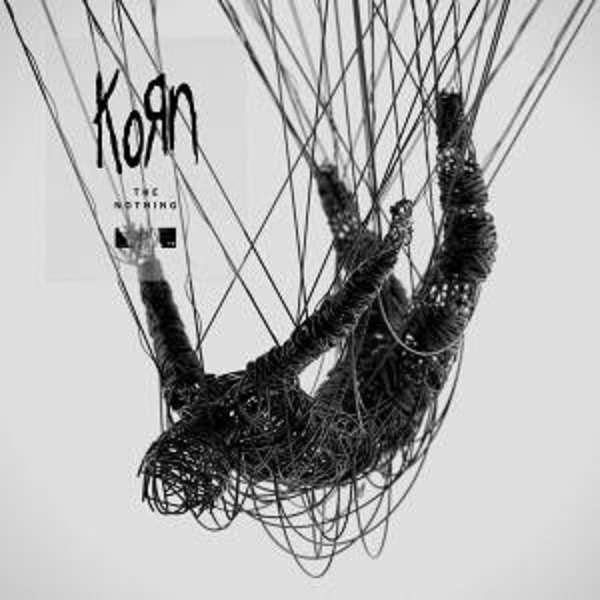 Nu Metal phenomenon KORN are due to release their new album “The Nothing” on 13th September 2019, giving us a whopping 13 tracks to get stuck into. It also happens to be their 13th record since starting out. Front-man Jonathan Davis has stated in recent interviews that this album is very much a concoction based around what he has been dealing with since his wife’s passing in 2018. I think that, for a lot of hardcore fans, this album has definitely been highly anticipated, as it’s the next step in their professional career since processing the news, which can of course make a huge impact for any individual.

The album artwork is, as always, an intriguing drawing with a lot of emotional pointers. Here is a picture of a body entwined in rope/string, but it also appears to be made out of the same fabric. It’s both a simple design, but also incredibly meaningful at the same time.

“The End Begins”, track number one, starts with some beautiful bagpipes. Not a first for KORN, but effective nonetheless. Half a minute in and the track starts to get heavy. By 1:00 this is already implementing everything KORN into it, from menacing background vocals to drop-tuned guitars. This short introductory song definitely screams “we’re back”. Next up is “Cold”. This song definitely brings out those same unapologetic vibes. It’s a heavy vocal track, and certainly worth a mention.

“The Darkness is Revealing” is straight up a great track. You can hear “Love & Meth” vibes throughout the song, which is a really nice touch. Lyrically, this song touches on some obvious pain but in a much less aggressive manner. Out of the songs on this LP, I feel like this is one of the ones trying to be sincere and go from a different stage in the mourning process. “Idiosyncrasy” is another track which really touches on the subject in a different way.

Track 6, “The Seduction of Indulgence”, is only 1:43 in length but that doesn’t mean it has any less of an impact. It’s very dark, very sinister and very personal.
I think at this point in the album it becomes obvious that there is a journey being told as you advance through each song. From confusion, realisation, and mourning to some sense of recovery. There’s no doubt in just how deep these lyrics go emotionally and mentally, and each track does it justice. “Can You Hear Me” brings a slightly new sound to KORN while still maintaining their foundations.

It’s a great album, and no track sounds the same. Without giving too much away, here are a few tracks which I think are certainly worth noting.

Closing the album is “Surrender to Failure”. 2:21 in length, this song brings down the tone and gives us a good curtain-draw.

Overall, a really good album which I think fans will be pleased about. It’s very expressive and dark, but still everything KORN.

You can find KORN on Facebook, and buy merchandise bundles here:  www.kornofficial.com