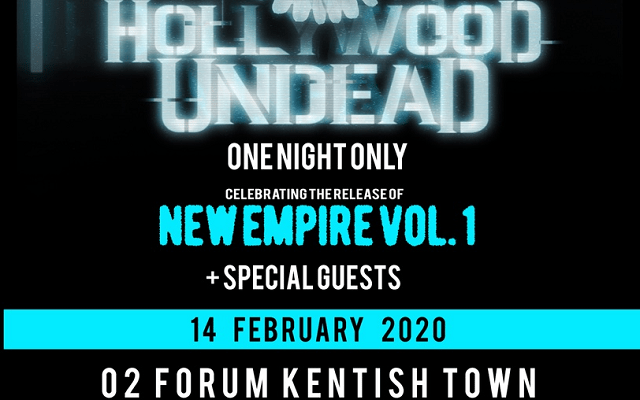 A Valentine’s show from the players themselves, Hollywood Undead grace the stage of the O2 Forum in Kentish Town, London, for the first tour reaching the UK since they released their new album – New Empire Vol.1.

The band starts off with a live debut of their song “Time Bomb”, which brings the hate and the usual power. I personally think starting off with a debut is a great idea, and an unexpected move. It eased the crowd into the mood, and we were ready to party with the big dogs.
The guys then go into a classic, “Undead”, which brings excitement from the crowd. It’s a song I always like seeing live. I would usually expect it to be a song that’s further back in the set list but I think it keeps the excitement juices flowing after hearing a debut.
I really enjoyed their performance of “Heart of a Champion” because it was a clear chant-inducing track, and the second of our debuts. I’d say that this song was one of the slightly heavier songs of the night, and it went down really well. “Dead Bite” was another strong performance of the night. The sass added to the atmosphere, and it left you wanting more.

Hollywood Undead are a great band for a number of reasons. They touch on some very real subjects, but remain a fun band to listen to when you when to get away from the constant seriousness that comes with a lot of metal. There are even songs to get you in the mood for a party, and everyone needs a bit of that enthusiasm when they’re getting ready.

Something I liked from this performance was the intermittent debuts they played throughout the gig, so the audience could get a leveled taste of their new stuff – mixed with the songs they love from previous albums.
One track I feel was slightly lack luster was “Another Way Out” because it was a bit out of the band’s usual dark, or sassy, attitude. It felt like Hollywood Undead, but diluted and poppy. This was the same live, and so I do feel that they had some other better choices they could have gone with to play live.

As to be expected, “Everywhere I go” was left for the encore. It’s at that point where if I didn’t hear it played at some point I’d wonder if I was even watching Hollywood Undead at all. The crowd chimed in with every word, and I was certainly flung back to when I was sixteen years old and singing this in a friend’s kitchen.

Overall, it was a good show that gave everyone their fix of favourites with added debut bonuses. The energy was high, and all round it was a fun gig. They had a strong set list, and the performance from the guys didn’t disappoint.