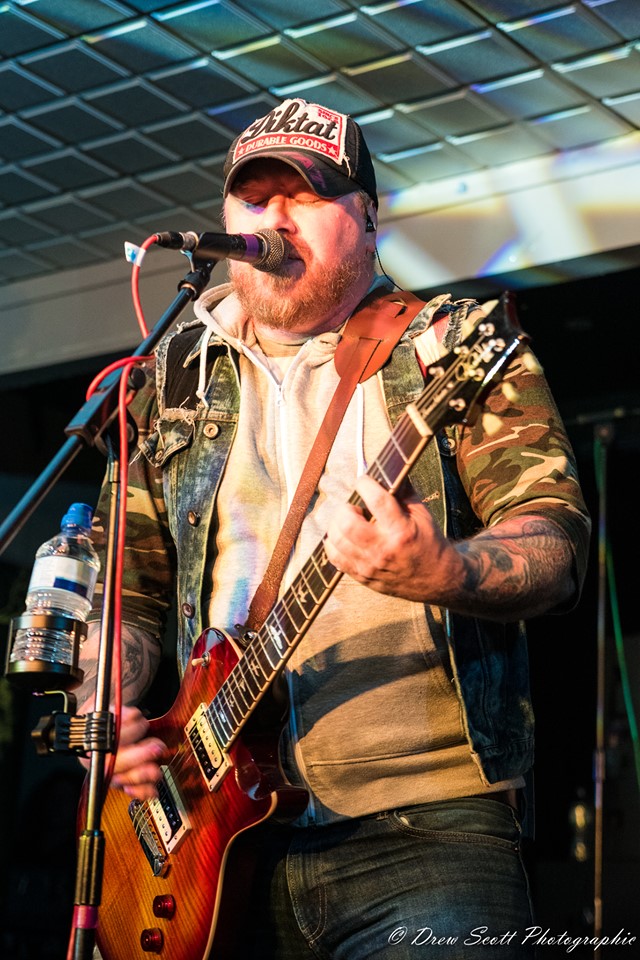 Sunday lunchtime and I return to the Breaking Bands festival site, chat and catch up with friends and people watch for a while, as you do. Stoke Prior is still standing after yesterdays assault, many folk look a little worse for wear though! With the computer game theme this year, you spot the occasional Mario or Pacman roaming around, even a head-banging dinosaur. The kids join in the fun too and there’s a Drum School for those who want to indulge in some stick bashing. Stalls for food, T-shirts and Accessories line the edges of the square. Of course there’s a bar, with decent prices and everyones so friendly. It’s one happy music loving family.

Anything but quiet is my first thought, this band from Stoke on Trent are on the main stage at lunchtime and they are quite superb. It’s heavy riffing, slightly old school rock, a sound that never tires. ‘Slow Running Train’ which featured on the debut EP in 2014 and the album ‘Silent Screams’ in 2017, is an explosive opener. Frontman Stig Chell is fairly unassuming, just gets on with it, like the style.’Unwritten’ is from the new EP ‘The Fate Of Elision’ and has more simple melody, but the strings of Neil Bailey on lead guitar tend to give it a pile of decoration. Another from 2017 is ‘Feed The Wolf’ with a massive, thunderous riff and a break that completely destroys, yes bring it on. More from the latest EP follow, ’Star Crossed Lover’, ‘Open Road’ and ‘Free Fall’, I can see how many judge them akin to ‘The Almighty’ they have that hard rock abruptness that Warwick and Co used to confront us with.The excellent hooky ’Speed Freak’ ends 40 minutes of pure pleasure.

Outside in the warm Sunday sunshine, the aptly named ‘At The Sun’ are tuning up in readiness, on the outside stage. I saw these Londoners last year in Sheffield when they came third in the HRH Highway to Hell contest and thought they were pretty talented.They are groovy, sleazy and have stacks of those moody tones that warm you. Get mellow with ‘Breathe’ and find your soul with ‘Walk On Over’. The vocals of Harry Dale are so powerful they carry through the air, they must be able to hear him in the next village. ‘Devil In Your Eyes’ is a singalong and the marquee crowd are in total admiration for these guys. Chet Jogia on lead guitar, can really bend those strings and the bands low, excessive, almost debauched sound really gets into your head. The debut LP ‘Leave Before The Light’ is available now and a headline tour is being planned. Go see these, I fully recommend them.

Time for some Metalcore next on the outside stage.Transients are a new band, only really taking off this year with their 6 track EP ‘Ememies Within’.The definition of transient is something only lasting a short time, nah I think this is a thrash band in the making. Vocalist Joe Knipe is all over the place, mostly on the ground in front of the stage not on it, fairly clear howling for one of his ilk and he has an endearing nature that comes across, during their 30 minute slot. I’m guessing they haven’t played many gigs, you wouldn’t think so and this appearance at BB is a tremendous opportunity to show us what they are made of.

FOOTPRINTS IN THE CUSTARD

I witness the infamous Mankini and Tutu from the side door, as these crazy party animals have filled the room before I manage to get a decent spot. It’s mayhem and filth of the lowest kind, some of the lyrics well, pardon my ears. Laugh, I haven’t enjoyed such stupidness from a band for years. The most silly and fun loving Footprints play ’Party Metal’ and Ride My Little Pony Ride’ which are off the new album ’A New Low’. You have to smile, ‘Cl*t Commander’ also a new one and ’Merlin In Berlin’ are thrust out, while lead man Russ in his Tutu, clambers into the unsuspecting audience. Love it, ‘comedy punk metal’ is how they describe themselves, hilarious stuff.

Back outdoors the Cardiff foursome Ravenbreed have just started up. Only materialised early last year, the band have already made a considerable amount of likes, amongst the throng and media. Gritty vocals from Zoey Allen, give them a grunge/blues feel and Mikey Watkins can make his guitar scream in pain with utterly unadulterated pleasure. A debut EP ‘Hollowed’ came out last year and we hear all three tracks, ‘Insult’, Lonely’ and ‘Falling Away’ which ends the set. I hope they follow that up soon with an album. One of those I would like to see here again next time.

On the main stage it’s a chance to see the Midnight Dogs, one of those I haven t seen for a while. Going since 2013 and often supporting the likes of The Quireboys or Dan Baird, its a case of bar-room Rock N Roll in its finest. ‘Down N Dirty’, ‘Scars’ and Bedlam Baby’ get the Breaking Bands audience rocking, it’s no nonsense stuff and so refreshing to sample, The Faces meet The Rolling Stones, that kind of magic. Mic holder Rob Cass, in his cap, paints a slightly sleaze/punk border to the picture.They carry on with the new  ‘Lets Go’ and we all chant along to ‘Only Rock n Roll (Can Save My Soul). I would have enjoyed seeing these do an acoustic set as well, maybe another time. They end on the fantastic ‘Lucy’, a really enjoyable performance.

The boys of the hour are here, last to play outside Collateral are pulling them in by the dozen. I have a front row seat, after seeing them at The Station in Cannock recently I’m already a fan. I call them a heavy Bon Jovi, which seems to suit. Beginning with ‘Big Shot’ you are immediately taken in, pretty youthful looks, long hair and cowboy boots. Others from the EP ‘4 Shots!’ follow, ‘Midnight Queen’ and ‘Going With The Wind’ allow the packed marquee crowd to discover how entertaining these guys from Kent are.Todd Winger is a stylish guitar player and provides some unbelievable solos. ’Lullaby’ is probably the most commercial song, Angelo Tristan’s vocals leading us into lots of ‘whoas’. Destiny awaits for Collateral, it’s been 5 years since the Angelo Tristan Band, started this rollercoaster. A lot of hard work is now finally beginning to pay off, they are back here as headliners next year after the BB faithful voted for them.They have also won a slot on the Bon Jovi Cruise and shows are coming in thick and fast, I’m so happy for them.

It is with the ringing of AC/DC’s ‘Hells Bells’ that the Appleton brothers Chris and Luke, kickstart the machine that is Absolva tonight. The heavy rockers descend into ‘Life On The Edge’ and Rise Again’ from the double album Defiance with no holds barred. The Social Club is tightly packed now, all have amassed to enjoy this Manchester troop. Having had a taster with an acoustic set earlier, I am amazed at the transformation, playing heavy metal like Iron Maiden, is quite different from the harmonies this afternoon. The list is a mix from the albums and ‘Never A Good Day To Die’ is a stormer, a riff of the highest magnitude backing Chris, with his Bruce Dickinson type of pitch. Having 1 hour and 20 minutes to indulge, it is a punishing performance, but I don’t need deliverance, I cant get enough of them. ’No Tomorrow’ also from NAGDTD, continues the theme, ‘Fistful Of Hate’ is slower and more dirty, then there is time for Martin McNee to show us his drumming skills, before ’No One Escapes’ and ‘Flames Of Justice’ which is the title track from their 2012 album. The suitable titled ’Code Red’ brings it to a close, god I’m drained but in a euphoric sort of way. When not playing as a 4 piece you can catch them playing behind Blaze Bayley and can be seen regularly on the gig and festival billing. Awesome stuff.

The Northern Irish rockers have the task of following Absolva, not an easy one by all means. Starting your headline show at 10.20pm, sometimes isn’t best practice, for a number of reasons, people are not at their most coherent for one ! Thankfully BB isn’t that kind of gig, its still packed and everyone is still in good spirits, mainly from the bar ! ‘Drink, Beer Destroy’ is the name of the Trucker party. After a few songs, I agree with the decision for them to headline, it’s a blistering set. A good variety of numbers from their 8/9 years and a cover of Creedence Clearwater’s ‘Proud Mary’. They have the Thin Lizzy in them on occasion, I even mistake one song for ‘Dancing In The Moonlight’ when it starts, then they cover ‘Rosalie’ almost read my mind. However they are made of heavier material with their original writing and this is chucked out, raising the roof until nearly midnight. Fans include, Ricky Warwick, Ginger Wildheart and Cormac Neeson (The Answer), who hold them in high regard. Great finish to the weekend.

The entertainment over, Jay McGuire takes to the stage and everyone involved in organising Breaking Bands is thanked, with a lengthy applause. Cant wait for next year.

Special thanks again to DREW SCOTT for the use of his photos.

It wasn’t an easy decision to return to the festival, after learning yesterday that my friend had taken her own life. But she would have wanted me to be there and I felt it better to be surrounded by friends and listen to music, than sit at home and cry. Thank you Faith, for sharing just a few months of fun, love and secrets. Memories I will always treasure.

We all have to endure the trials of life, it isn’t always an easy ride, we all suffer inside from time to time, some of us take the knocks better than others. If you or anyone you know is struggling, feeling depressed or just plain miserable, please talk to someone or seek help. Here are a few contacts –