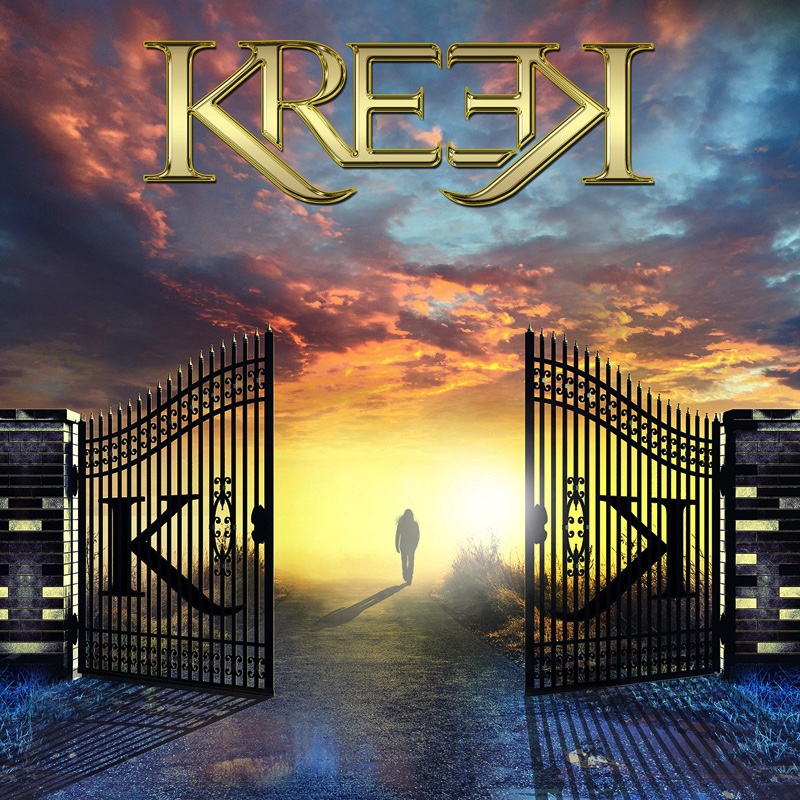 It’s exciting to learn that Antony Ellis has resurfaced with a new outfit. ‘Kreek’ were actually formed back in 2019 after Ant had left ‘Bigfoot’, (A much loved band, who have now split up). Ant was encouraged by Frontiers Records to remain with them and he soon found musicians who were keen to enlist for a new project. Fast forward to 2021 and ‘Kreek’ are ready to release their eponymous album. Produced by Dan Rossall, who has worked with Passion and The Revolution Saints, the 10 track  debut is out on Feb 12th.

After an introduction of what sounds like a spot of wild weather, there’s an impressionable and gradual build up to ‘At The Bottom Of Hell’.  It’s almost as fantastical as ‘Uriah Heep’ were back in the 70’s, with the multiple heavy effects, polished vocals and sense of impending doom. The result is really vintage ‘classic rock’ sounding, loud and forceful and having that muzzy, smokey atmosphere. ‘Missiles’ blasts off with a decent stroke of guitar, before the noise levels are stretched and Ant delivers with incredible style. The guitar hook comes in again and binds this number with superglue effectiveness. The third one up ‘Meet Your Maker’ has a sleazy bass rhythm and raw edgy guitar that gets the juices running from the start. Punchy vocals with echoing chants and a wizardry strumming solo, give it lust filled attention. The first single ‘Million Dollar Man’ is also a reminder of the classic rock era, but with todays added technics. It’s so well put together, it’s hard to believe this is actually a band, who haven’t been in existence that long. I love the squealing guitar that briefly stops the flow and Lee Andrews’s bass intersecting it all. Along with the underlying and perfect drumming from Seb Sweet, this has been written to impress and it certainly hits the mark.

‘One Voice’ uses the lower tones to begin with, a slower, more modest introduction precedes the operatic delivery by Ant, in truth, the title sums up the song. After another interlude of awesome guitar and bashing of skins, we succumb again to the vocal talent of Mr Ellis. Much in the vein of Geoff Tate and Queensryche, this is a powerful statement and the more I play it, the more I appreciate the finished product. ‘Man On My Shoulder’ continues the power striking direction. Ant is let loose to demonstrate his range and there is plenty of skill to be heard again from guitarists Dan Collict and Nick Clarke. It slightly mellows out the album for four and a half minutes, as it’s not as hard hitting as its predecessor, adding some more variation. The initial raunchiness of ’Stand Together’ throws me, as the lyrics are brought in with a slower ballad style. Nevertheless, the subtle, rich and bluesy effects that follow, make it a full on and pretty outstanding track. We get ‘Down ’N Dirty’ at number 8, rumbling guitars stagger along, with more dynamics from the frontman. There’s a more ‘rock and roll’ attitude lying in this song, with a strong hint of the gutter rock that we adored back in the day. ‘Get Up’ has unbound smoothness and a gorgeous amount of sexy guitar, the pace is carefully calculated and treads steadily with intense lushness, I like how it goes out with a sudden ending. The album comes to a close with ‘You’re On Your Own’ a true ballad to rest on. Five minutes of heart rendering and dramatic brilliance, the song is a perfect way to bring Kreek to a superb finale.

I often hear debuts from bands and they often receive my worthy praise, but this is one hell of an album and stands out, not only for the exceptional musicianship, writing ability and creativity, but because Kreek have produced a piece of work that’s faultless. This is a band that will rise and stand equal to their peers, not just because they don’t have any weak points, but due to the fact that they sound like they’ve been around for years, mature, professional and having the aura of a classic rock band. I’m off to play the album again, which I can already guarantee, will be in my top 5 of the year.

‘Kreek have produced a piece of work that’s faultless’

Highlights  – Meet Your Maker , One Voice , Stand Together , Get Up

At The Bottom Of Hell, Missiles, Meet Your Maker, Million Dollar Man, One Voice, Man On My Shoulder, Stand Together, Down ‘N Dirty, Get Up, You’re On Your Own