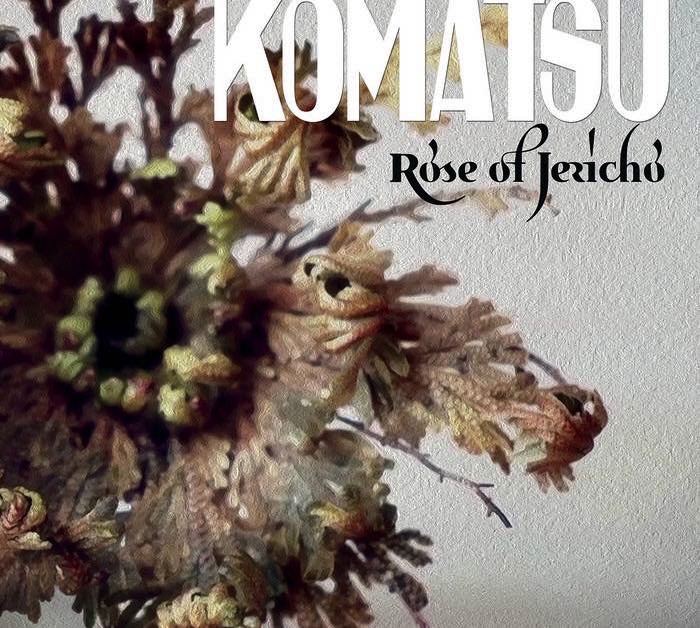 Describing themselves as Dutch Sludge / Stoner Rock, Komatsu released their fourth album ‘Rose Of Jericho’ at the beginning of this month. The band have been together since 2010 and are not without some worthy respect and admiration from their peers. In 2016 the second album ‘Recipe For Murder One’ featured vocals from Nick Oliveri ( Kyuss, Queens Of The Stone Age ) on a couple of songs. One being ‘Lockdown’, which was nominated for ‘Song of the Year’ by the Dutch Television/Multimedia company 3VOOR12. They even performed at a QOTSA after show in their native town of Eindhoven and have toured with Nick’s band ‘Mondo Generator’. As well as joining international acts such as, Red Fang, Clutch, Nashville Pussy and Corrosion of Conformity, on the road, they have also supported John Garcia, founder member of Stoner Rock band Kyuss.

’Stare Into The Dawn’ was the first single off ‘Rose Of Jericho’ back in October 2020. It’s a promising start, dragging and crawling guitar howls with menace and vocalist Mo Truijens, utters slow and sorrowful cries. There is a break with a strong and hammering riff, which helps the song to balance. It’s haunting and crushing to the end. ‘Solitary Cage’ is more of a rapid chant with stormy overtones and swirling strings. There’s a strong Middle Eastern feel, wow, is this Arabesque Metal ? It goes out with a thunderous mash from the guitars, that get deeper and deeper into the storm. ‘The Suit’ enters the flow more quietly, distant chords reverberate before the vocals join in. Powerful and unstoppable it tears its way into the soul. Eventually coming to a grinding halt, even the last few seconds are quite impressive.

‘Blood Moon’ changes direction, with more focus on the vocals to begin with. Soon there’s an accompanying riff that wallows in the Sludge and although this track is more sedated, it retains the dark and accursed feel that Komatsu are so good at delivering. ‘Son Of Sam’ takes yet another turn. The drums of Joe Roosen hold the rhythm for a mellow introduction. It soon descends into the mire though, with grating guitar and an increase in the vocal response. The tempo is steadfast and there is plenty of more succulent guitar playing in the second half. The eponymous track is one of the outstanding numbers. A ‘Rose Of Jericho’ which is on the album cover, is a plant that can survive in the desert when completely dried out and magically unfolds when it finds water. This song has a fast, yet meandering journey, just like the plant, boundless riffs nurture it like liquid and the resurrection is complete on the final chord. ‘Blackbird’ has a catchy hook and all the craftiness of the title creature. The drums of Jos and bass of Martin Mansvelders dominate the underlying reverb and the gritty strings of guitarist Mathijs Bodt give it a pleasurable flighty tone. A bit of lighthearted vibe that adds a subtle variation, from the previous songs. Eerie and melancholy, the second single ‘Call Of The Wolves’ hints at all the desolation a wilderness can offer. Far reaching effects linger in the air and the atmospheric whining brings it to a conclusion. Last on the album is ‘Om’ and it’s a modern ‘metal’ reflection on the sacred sound of Atman and Brahman. Although the idea that truth and knowledge comes from within, with meditation and chanting, this final number takes us on a harsher path to reach a conclusion. ‘Om’ is about facing the ultimate reality, something a lot of us are dealing with right now.

Dutch Brothers from QOTSA/Kyuss other Mothers, Komatsu are a must for any of us, who love the heavy pounding of the Post Grunge/Stoner genre. If you were lucky enough to catch them on their trip to the UK in November 2019, I don’t need to tell you what a heavy mix of Sludge this band can create. For the rest of us we can only hope and pray that they tour Europe again, when all is well. In the meantime grab a copy of ‘Rose Of Jericho’ it’s a pretty heavy and captivating piece of work.

‘What a heavy mix of Sludge’.

Highlights –  Stare Into The Dawn, Solitary Cage, Rose Of Jericho.

1. Stare Into The Dawn

8. Call Of The Wolves

Rose Of Jericho was recorded and mixed at Studio Iglesias, Eindhoven by Producer, Pedro Speedrock van Elderen (TankZilla / PPSR) and mastered by Pieter Kloos at the Void Studio, Eindhoven. The album was released on February 5th 2021 with Heavy Psych Sounds –