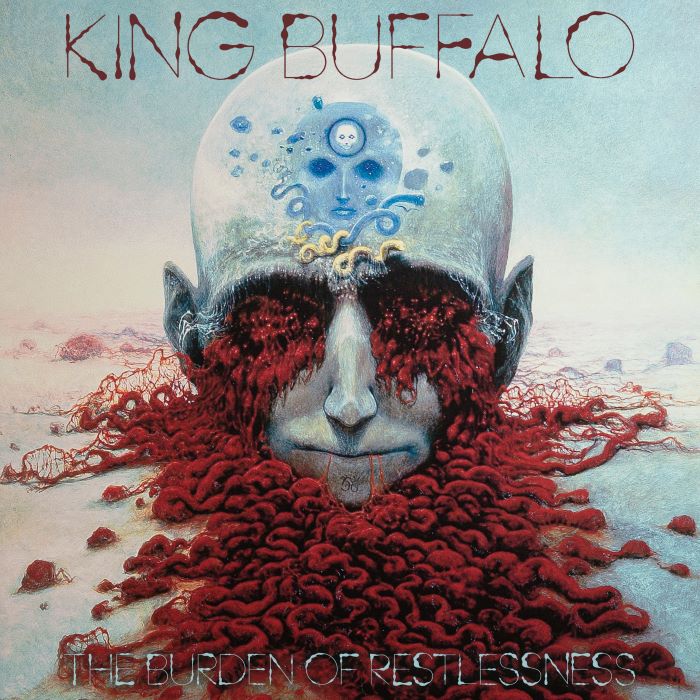 During the pandemic bands all over the world were forced into hiding, stripped back from live shows and tours. A stressful dark time that had one distinct positive – there was no excuse against creating new material. For King Buffalo, the band has optimised this wealth of time to the max with soon to be released The Burden of Restlessness the first of three albums to be released this year. Specialising in heavy psych and stoner rock, with their new offering King Buffalo have pushed progressive elements to new heights, crafting an album that’s equal parts indulgent and exciting.

What’s immediately apparent is the enormity of King Buffalo. The band comprises of three members and it’s clear that this is in no way a hindrance. The opening of Burning is dominating, tribal like and rhythmic. It’s fascinating to break down all the elements and realise that they solely consist of guitar, drums and bass. The vocals are distant yet grungy like Kurt Cobain drifting through the psychedelic clouds. The repetitive nature of the riffs is not tedious and instead allows for a constant rhythm and flow, heavy and all encompassing. It’s a magnificent track to begin the album.

Hebetation is more upbeat, opening with a fantastically fuzzy guitar riff and rumbling bassline. The lyrics speak of not knowing where to run, the confusing elements of life and death and feeling stuck whilst everything is in motion. It’s clear from the beginnings of the album that King Buffalo’s emotive lyrics are one of their greatest assets. Musically the closing instrumental section is spacious and free, riffs becoming isolated before all the instruments join together in one full psychedelic force.

Speaking of swarms and plagues, Locusts features excellent guitar work with a hypnotic riff throughout, sparkling with clarity and essentially becoming the backbone of the song. The riff is occasionally interjected with distortion until it takes over completely in full triumphant form. There’s a seriously groovy melodic section where the bass noodles and the guitar strings bend and scream until a gradual fade.

Silverfish is a complete standout. Lyrically it begins with the line “I stare at the cracks in the wall and melt into nothing”. There’s such a simplistic yet poetic beauty here that draws me in instantly. The song continues to offer me clear intricate visualisations, the lyrical imagery formulating perfectly in my mind. The intense focus on the cracks on the wall uses the everyday experience to develop a wider deeper message, the unravelling of satiny and the metaphorical silverfish.

Grifter features a greater use of synths and an overall ominous tone. There’s something about the vocal delivery, the stark clarity of the voice and lyrics that create such a vivid picture in my mind. Here I’m taken across a sandy desolate landscape, rich with decay, the darkness intensified further by the low heavy riffs and the urgency they seem to possess.

The Knocks is a work of art. Lyrically the track speaks of the trivialities of life, the useless feelings and the contemplating of escape through suicide. Again, like Silverfish, there’s such a simplistic image that’s created through the lyrics, this time of a man lying on the floor, ear to the ground and hearing the knocking on his barricaded door. It’s beautiful clear storytelling that reminds me of Johnny Cash, where the listener is taken in and engaged with the protagonist’s story. Like an interlude in a good book, I find myself awaiting the vocals to begin again so I can find out what happens to the man lying on the floor. The interlude then turns out to be an instrumental ending, creating suspense and intrigue as to what happened after the voice stopped. But what an ending. Fully expressive and large, it fills my ears with a multitude of sounds and feelings. It’s truly expansive and awe inspiring.

To conclude, Loam possesses that same richness in clarity of lyrics and a consistent hypnotic riff that serves as the perfect backdrop for bluesy solos and progressive elements to flourish.  The line “I’m shedding the burden of restlessness” could easily be perceived as a naïve way to reference the album title. Yet it works beautifully, generating a sense of completion, of a journey that’s reached its end. The Burden of Restlessness is truly reflective of the time of its conception. There’s such a darkness throughout, either through the themes of the lyrical content or the sheer foreboding energy of the instruments. I was genuinely sucked in and engaged very quickly, entirely submerged in the vivid nature of the images and how the enormity of the sound only contributed to the richness of the imagination.

This album has me thinking whether I throw 5 stars out too liberally as The Burden of Restlessness is the very definition of a 5-star album through and through.

The Burden of Restlessness is released on June 4th.

Highlights: Silverfish and The Knocks

King Buffalo are a part of Stickman Records.