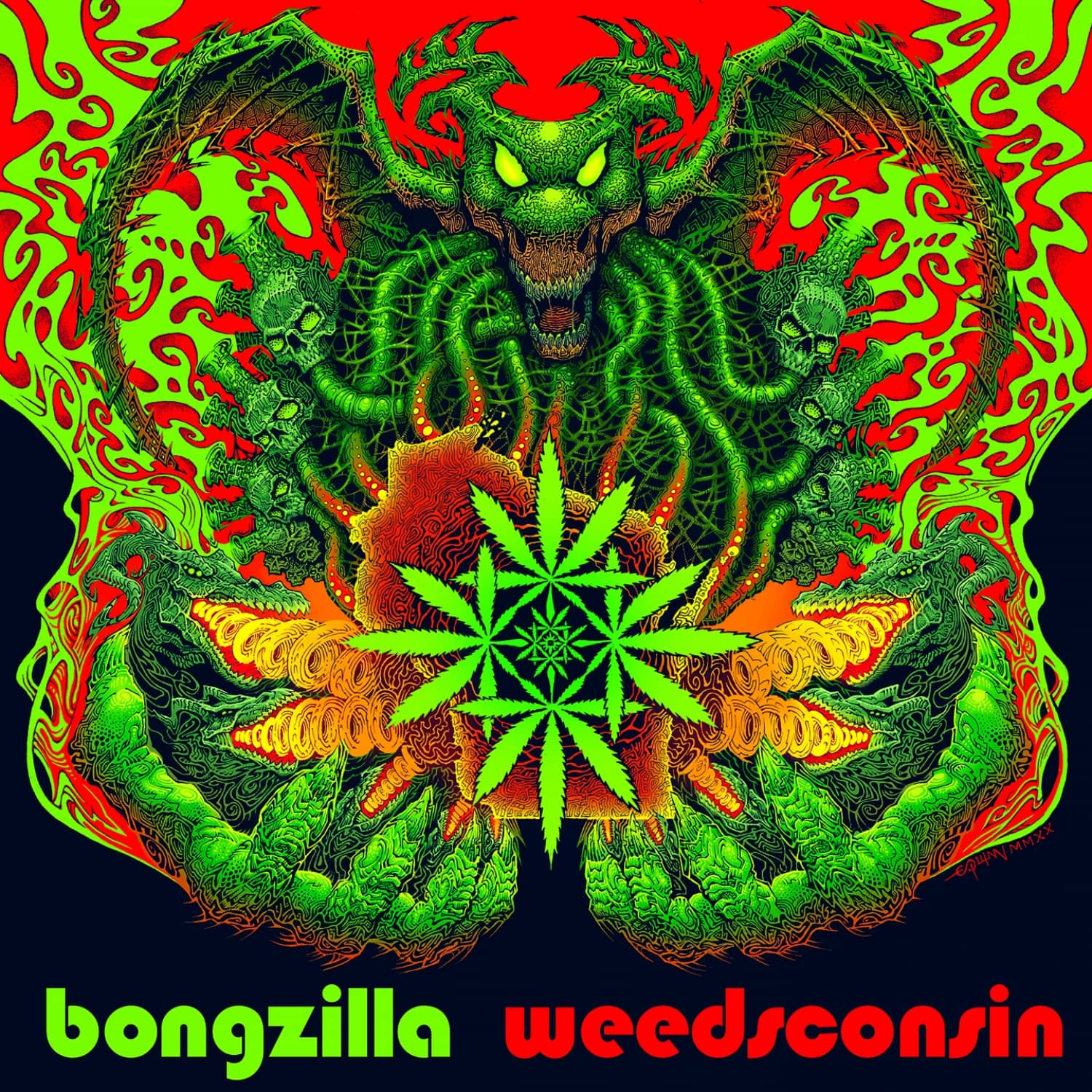 The Cannabeast is back, roll out the green carpet for the masters of sludge metal, (IN)hail to the kings of weed stoner rock, BONGZILLA have dropped their 5th studio album ‘Weedsconsin’, and we are all pretty (S)toked for it.

Enough of the puns and lets get into the gritty of it, BONGZILLA comes at you with a huge change in their style, showcasing a new more rhythmic tone, while maintaining their heavy lyrics and drop tuning riffs, BONGZILLA comes back as a revamped three piece promising to show a new heavy psychedelic style that focuses on soul destroying beats and smooth solos.

The title track ‘Sundae Driver’ starts off with a ground stomping guitar, letting you know that the new three piece format means business. At the minute mark we hear a huge change in beat and the main riff comes into play, welcoming the signature guttural vocals of singer Mike “Muleboy” Makela. The intro line of “Have You Heard” is monstrous and shows that the singer hasn’t lost any of his vocal power in the bands hiatus.

The second track ‘Free The Weed’ gives us a meaty but mellow sound while the drums drop into a rhythmic slow symbol heavy beat that brings a fuzzy feeling inside, this track is the first to really show a progression into a more mainstream sound.

The second half of the song takes on a more psychedelic style, the whole thing is reminiscent of early age stoner riffs. A rhythmic blues beat is followed by a guitar that fans of old Sabbath and Pink Floyd will remember, the solo performed at the end of the track is led into perfectly, and shows a huge development in BONGZILLA’s writing style.

Track number three is probably my favourite on the list to vibe too, ‘Space Rock’ is a great example of a chill out song, it has a steady repetitive beat that isn’t overloaded with too much junk and a guitar that compliments it perfectly.

‘Space Rock’ gets more intense at the track goes on, around the two minute mark the guitar drops to a heavy tuning and the trademark guttural singing comes in, what’s unique is that while the songs intensity increases, I was still just spacing out and vibing like I was when it started, that’s something special.

While ‘Space Rock’ was the half way point in the album, the real interlude goes to ‘The Weedeater’. The song is more like a filler track, it’s the first time I have seen a filler track performed like this from BONGZILLA, and while I thought it was a little short, it served it’s purpose of getting me ready for the change in tone of the album.

‘Earth Bong/ Smoked / Mags Bags’ brings us a slower paced sound, this is the point where I really started to get Sabbath throw backs. The sound is such a unique style for BONGZILLA that if the singer Muleboy didn’t start screaming I would have mistaken it for early Iommi.

At 15 minutes Earth Bong marks the longest track on the album, and probably the longest from the band, to me the song ran the risk of being TOO long, 15 minutes is a lot of space to fill, but BONGZILLA managed to keep it unique and filled while still keeping to their format. The track time is a bit of a put off, but trust me, it’s worth the listen.

This brings us to the final track from the revamped band, ‘Gummies’. ‘Gummies’ like the rest of the album is about showcasing this new tune that BONGZILLA is going for, it’s mixture of mellow beats with heavy deep guitar make the track extremely satisfying to listen too, and brings the whole album nicely to a close.

My final thoughts is that ‘Weedsconsin’ is an absolute must listen too for fans of classic metal. The whole album is a perfect bridge between psych metal, classic and stoner rock, not to mention a fantastic testament to the late John Hopkins, who recorded and mixed the album at Future Apple Tree Studios, before he passed away in late 2020.

“The whole album is a perfect bridge between psych metal, classic and stoner rock, not too mention a fantastic testament to the late John Hopkins, who recorded and mixed the album at Future Apple Tree Studios, before he passed away in late 2020.”