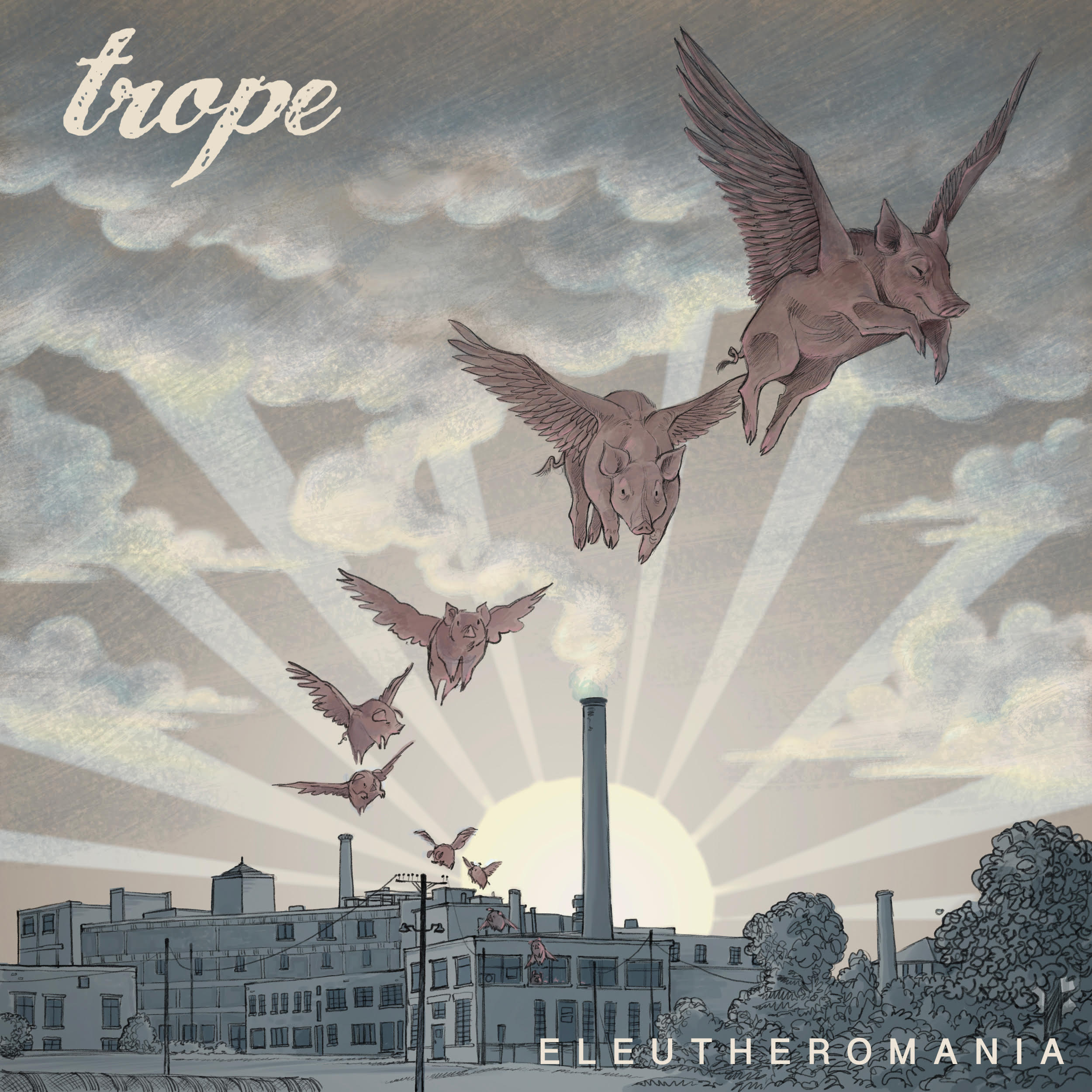 LA-based progressive alternative rockers Trope released their debut full-length album ‘Eleutheromania’ at the end of March – a word meaning a ‘mania or frantic zeal for freedom’ (thanks, Google). With more than a hint of influence from the likes of Tool, but also other 90s rock heavyweights such as Rage Against the Machine, Pantera and Soundgarden, Trope’s sound is familiar enough and will have a warm nostalgic factor for a certain generation of listeners. With a cover of Tears For Fears classic ‘Shout’ as well, Trope wear their influences proudly on their sleeves. But do they balance individuality with influence?

Opening song ‘Lambs’ – first released as a single almost a year before the album came out – comes in with a winding Tool-esque bassline, a verse vocal line straight from the Maynard James Keenan playbook, and clever guitar and drum interplay that, indeed, could have come from a lost Tool recording session. Great if you like Tool, then, and the musical crescendo and buildup is well-executed, particularly with the way the song thrillingly culminates into frenetic proggy energy at its close. The songs don’t run for long – ‘Lambs’ is by far the lengthiest on the album, at just over four and a half minutes. You couldn’t accuse Trope of dragging anything out for too long.

Although the concise approach works and is worthy of reward, allowing the band to flex their abilities in doing more with less, part of Tool’s appeal for me personally is the sprawling, extended nature of some of their jams. I could ultimately also say the same about ‘Lambs’ for ‘Pareidolia’ or ‘Surrogate’, without having to change much of what I’ve already written. It seems harsh to say for a band who are clearly all very talented, proficient and musically literate, but Tool have done all of this before, and did it better. The odd time signatures, drop D riffing and melodic phrasing are just a little too familiar.

The cover of ‘Shout’ is placed in the first half of the album, assumably to give it more of a place in the spotlight than for it just to be a novelty cover song. It is more than that; the instrumentation is darker, it makes use of interesting guitar effects and has some fairly heavy, groovy riffing to add shade to the light. Certainly has more going for it than the Disturbed cover of the same song. ‘Planes’ has a very cool verse, where you find yourself picturing a sparse, sandy desert, alongside a big, grungy chorus and a well-written transition. Its shifting rhythms, use of contrast and well-placed crescendos mark it out as one of the strongest songs on the release. However, this is a prime example of where the short runtime lets the song down; when ‘Planes’ grinds to a halt just after the three and a half minute mark, it’s hard for me not to feel frustrated that there isn’t more.

This review has been ambiguous so far, but there’s plenty of positives. ‘Privateer’ opens with some very cool Rage Against the Machine-inspired guitarwork, although as if Morello and co were more inspired by odd numbers than social issues. With plenty of key changes and quickly evolving musical sections, the concise songwriting actually works well here, and you wouldn’t guess that this is the shortest song, only running barely past the three-minute mark. ‘Pareidolia’ has some extremely impressive drumwork, and the choruses in ‘Breach’ and ‘Plateau’ have very clever uses of harmony and chord changes that provide colour and interest – the latter of which sees vocalist Diana belt out a strikingly long note after one of its refrains.

I feel very conflicted about ‘Eleutheromania’. All musicians stand out and are good at what they do, but you get the impression they could be doing more. Diana Standberg’s voice is solid, but her lack of grit in her delivery, for example, could be preventing her from standing out even more. A few elements of ‘Eleutheromania’ are too similar to each other – such as the RATM-inspired riffing in ‘Breach’ and ‘Privateer’ or the obviously Tool-esque songs – or just bland, notably ‘Seasons Change’. Trope clearly know how to be individual – take their approach to covering ‘Shout’ – but in order to craft something really special and hone their blatant potential, they need to work on their own individuality. ‘Eleutheromania’ is underwhelming to a degree, but fans of 90s rock – especially Tool fans – should stick around regardless. It’s only a debut; it’s just the beginning. Plenty would disagree with me.

‘Eleutheromania’ was released on 31st March – buy it on Bandcamp