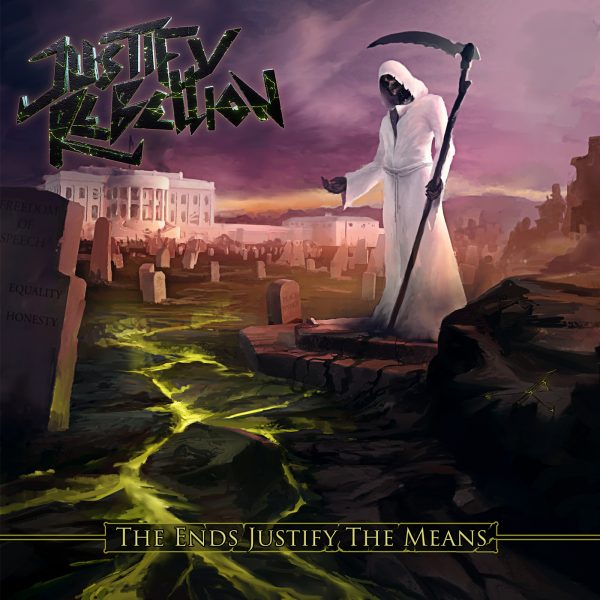 When casting your eye over the album artwork of The Ends Justify the Means you know you’re in for a good time. Who could possibly resist the typical metal tropes of a grim reaper lurking over a radioactive graveyard with “freedom of speech” and “justice” carved on grave stones whilst the White House looms in the background? It’s the kind of socially conscious imagery that makes metal so great.

But the artwork is not filled with false promises. The Ends Justify the Means proves to deliver the hallowed genres of metal and thrash in perfect unity. It’s heavy, it’s fast and it’s politically charged as hell. Yet Justify Rebellion set themselves apart from other metal bands by incorporating melodious twists and unexpected lyrical turns to create a refreshing and interesting listening experience.

Opening instrumental track Präeludium, Latin for prelude, is truly haunting with fragmented and echoing guitars sounding like a silver spoon scratching against china. Acoustic tones are gently plucked and later coupled with ritualistic chanting that encourages a disturbing atmosphere. Everything merges together seamlessly until each part fades out in the order it appeared.

Crowd Control instantly fires up and the comparisons to fellow Danes Volbeat immediately make sense with the groovy opening riff.  The riffs honestly wouldn’t be amiss on a more metalized version of Load by Metallica. Frontman Lukas Rautenberg even sounds like a Danish version of James Hetfield with more bite. Metallica associations aside, Crowd Control is a fantastic opener and one of the best songs on the album.  Instrumentally, the chorus is ridiculously catchy and the middle section is riddled with heavy palm muting, pounding drums and a haunting guitar solo. Meanwhile the lyrics air caution of life not being controlled by a higher power but lived with independence and integrity.

Prisoner in Time builds up to a solid chugging riff and again very much sounds like it could be one of the riffs circulating around the studio during Metallica’s Hardwired sessions. It’s quite difficult not to make associations to Metallica but it’s no bad thing, especially as Justify Rebellion bring their own flavours to the archetypal metal melting pot. The chorus is melodic and punchy, the drum beats emphasising and hammering the vocals into the ears of the listener. This is particularly effective when considering the lyrical message of being consumed by work and unaware of surrounding loved ones. The song draws back briefly with a simplistic palm muted segment that’s only accompanied by a steady drum beat that shifts the tempo into slow motion. This then builds up into a blistering solo with a flurry of double bass. The instrumental sections here are simply beautiful, the harmonising guitars entrancing and adding another dimension.

Shameless is another unfaultable metal track, the riffs intoxicatingly rhythmic and heavy. The Summoning then adds an interesting variation through a predominant bluesy riff and a considerably lighter and melodic chorus, demonstrating instrumental and vocal range. The vocal melody to “Fight it, deny it, you can never hide it” somehow reminds me of the melodies in A Man for All Seasons by Robbie Williams for the Johnny English soundtrack but such associations may just be an example of the random clutter floating around in my brain. Still, it proves my point about the unanticipated variety that Justify Rebellion weave into their music.

Meanwhile, The Bringer of War is just as heavy as you would expect it to be. The vocal melodies are simply brilliant in the verse, ranging from low menacing whispers to rage induced commands. The lyrics themselves speak of political leaders over the years manifested as the devil himself. Even the repetitive psychedelic-esque riff is practically soaked with a devilish charm. The chorus contains a wonderfully demonic snarl of “Satan will return” with plenty of declarations of Earth’s destruction. If that isn’t enough to satisfy a metalhead’s appetite, three minutes onwards is practically a thrasher’s wet dream with blistering palm muted riffs and an accompanying drummer who’s been shot in the arm with amphetamines.

Salvation opens with an isolated riff, a brief pause and then another fantastically heavy chugging riff. The lyrical melody here is different and catchy, the first word of each line pronounced for effect. The chanting prior to the chorus has echoes of Parkway Drive, consolidating a modern metal tone. “Cut her up, Fill her up, Wake her up, Put her to sleep again” is such a significant analogy to mankind’s abuse of Mother Nature. As we’re currently suffering a global pandemic, the lyrics couldn’t be more fitting to the extent that humanity is ruthlessly destroying the planet and jeopardising the very air we breathe. Whether it’s through pollution, war or climate change, Salvation is the very embodiment of our global situation.

There’s an interesting instrumental shift towards the end of the song, the drums pounding and warlike before a frantic riff kicks in, placing everything into fast motion. This is particularly effective in the music video which can be seen below as the whole video rewinds back to the start, a comment perhaps on the way in which the destruction of the planet is relentlessly repetitive.

Syretrip, translating from Danish into English as acid trip, is a shift from the severity of Salvation and instead offers a refreshing boogie woogie-based metal track paired with aggressive vocals which is a seriously cool dichotomy.  The opening riffs could easily be a soundtrack for a classic haunted house escapade with early 70s’ Scooby Doo. And that is definitely not a criticism. We all know that Shaggy especially would be a metalhead in a weed-infused haze.  In terms of metal comparisons, there’s the merest sprinklings of Exodus’ classic Toxic Waltz in there as well. Syretrip is super addictive and psychedelic with a thrashy flair. I also appreciate the subtle weavings of cowbell in there too.

Throne of Greed is the longest track on The Ends Justify the Means and is quite the dramatic journey. Hailed as the second part to Ancient Pharaoh from their first album Unleashing the Beast, the Pharaoh is now overthrown. A slave becomes ruler yet quickly becomes infected with power and greed – “You’ve become what you wanted to kill.” Through an Egyptian context, Justify Rebellion effectively reiterate caution towards political rulers and how an ordinary individual can be corrupted by opportunities of power. Throne of Greed is one of the thrashiest tracks on the album yet still possesses beautiful melodies and blends the two together perfectly. An absolute gem to conclude with.

One of the precise reasons why I love metal so much is the frequent bashings of politicians, environmental awareness and such a clear social consciousness. All of this is available in troughs with The Ends Justify the Means. Yet there’s also the sprinklings of old tales and myths and conflicts with the inner self. Musically, the songs are so richly varied yet are still so consistently heavy.

By the end of the album, I know I’ve found a new band to consistently listen to.

And if you’re stuck in self-isolation right now, this is the perfect album to listen to in the midst of a global pandemic.

Justify Rebellion are a part of Mighty Music.