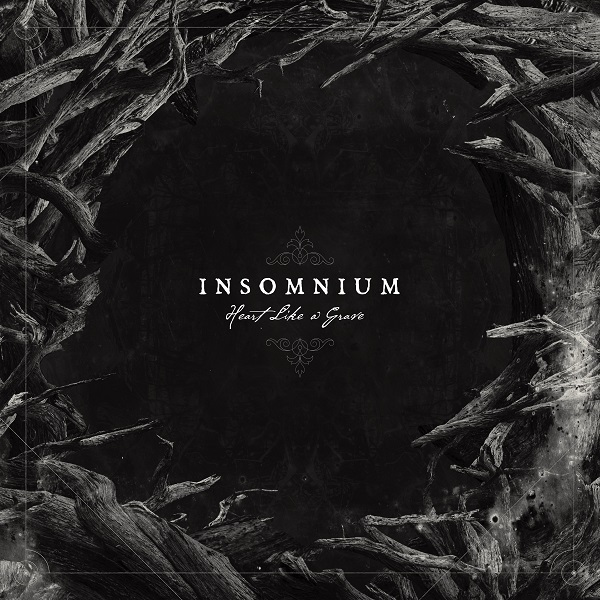 Insomnium took the boldest step of their career with 2016’s concept album Winter’s Gate, which was comprised of one 40 minute track. The gallant move paid off, being well received by fans and critics alike, but it raised the question as to where they might go next after such a daring venture. Normalcy is the answer,  as album number eight, entitled Heart Like a Grave, is a return to a more traditional format, with 10 songs spread across an hour long run time.

Opener “Wail of the North” seems a statement of their intent, as they rip through the bite sized epic in 3 minutes. It starts life in a realm of serenity, before the ethereal veil is torn to shreds when it morphs into a fierce, driving melodic monster. It packs a lot into its brief run time, which is a shame because as is it feels more like an appetiser than a fully-fledged feast. The same mistake isn’t made with “Valediction”, which weaves in and out of the shadows, combining clean vocals and soft verses with a more stereotypical melodeath chorus. It’s our first chance to see what Jani Liimatainen brings to the table, and his pleasant voice work well with Niilo Sevänen’s growls. “Neverlast” ups the ante further, fusing acoustic guitars, tremolo riffs and fleeting harmonies into a dynamic, mesmeric marvel.

Just as you’re preparing to pick your jaw up off the floor, Insomnium make sure it’ll stay there for a good while longer as they delve into the nine minute marathon “Pale Morning Star”. One of those songs that can be aptly described as ‘a journey’, it puts death, black and progressive metal into a melodic melting pot, forging a valuable commodity indeed. A functional marriage of opposites, the track coats a molten hot core in an icy veneer, flitting between the two with consummate ease. It’s a staggering piece of songwriting, and not a single second is wasted.

After three sublime compositions, Heart Like a Grave starts to cool off, and the fire is never reignited with the same sort of intensity. However, there’s still a lot of quality on offer, even if it starts to feel like the songs are all cut from the same cloth, with melodies draping themselves all over the stoic, robust riff sets at almost every turn. Producer Jens Bogren does a stellar job as always, smoothing the rough edges over without dulling the edge of the more abrasive aspects of the music. The keyboards and guitars often come together as one in an act of perfect mutual symbiosis; with sweeping, lush soundscapes stirring up feelings of tranquillity. For all the heaviness this record possesses, there’s something incredibly peaceful about it all, with despondency and anger in short supply. Not quite what some might expect for a genre with ‘death’ its name, but it’s what practitioners from this branch of the style have been doing for a while now, and Insomnium really excel at it.

Heart Like a Grave is another great entry in Insomnium’s catalogue. It doesn’t offer anything radically new, but they’re so good at what they do that it doesn’t matter too much. As enjoyable as their daring escapade was in 2016, it’s nice to be able to sit down and absorb new music in more manageable chunks. In 2002, Insomnium leapt to the top of the melodic death metal scene at the first time of asking. It’s now 2019, and they’re still up there, with no sign that they’re about to relinquish their spot any time soon.

Heart Like a Grave is available on October 4th via Century Media Records, and can be purchased here.