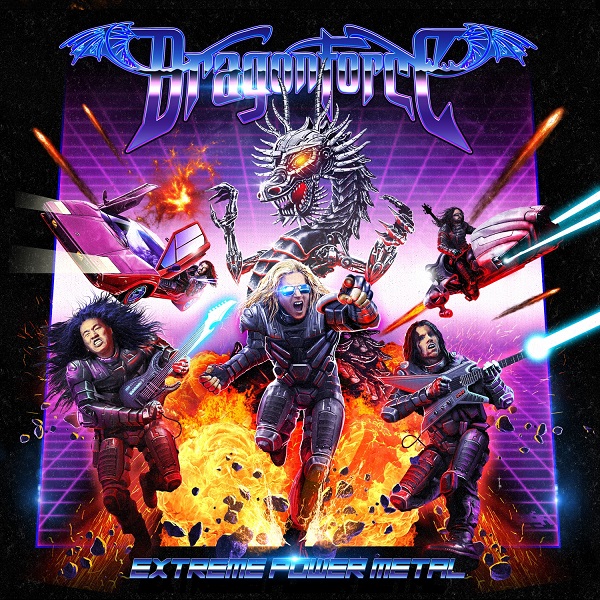 Truth be told, I did not expect Dragonforce to survive as long as they have done (and I’m probably not the only one). I thought the loss of Roadrunner’s backing and the departure of singer ZP Theart around 7-8 years ago would’ve been the death knell for them, but if anything, it’s only spurred them on. They’re now on their fourth record with vocalist Sam Hudson, and even in the face of some more line up changes in recent times, they’re sailing on through adversity to deliver some fine music.

Extreme Power Metal is something of a misnomer, although I can’t imagine anyone will go into this album expecting abrasive production or gruff vocals. The speed at which Dragonforce play is synonymous with the heavier end of the metal spectrum, but they’ve always coated the songs with a sugary melodicism that offsets any forays into extreme territory. That is certainly the case with this record too, which features all the high octane thrills and spills you’ve come to expect from the group, but as often has been the case with Dragonforce, they’ve plenty more to offer than just the novelty of playing really fast.

“Highway to Oblivion” initially feels like it will threaten to play up to many of the tropes that detractors criticise the band for, but before long it’s apparent we have a refined Dragonforce in action, writing and playing with a restraint and maturity beyond what they had in their heyday. There are still instances of showboating and moments that some will find excessively cheesy, with Herman Li and Sam Totman trading blazing guitar runs with remarkable ease, but they’ve been reeled in to levels that most should find tolerable. As an introductory piece, it’s perfect, as it shows off Dragonforce’s trademark sound, whilst also exhibiting other facets that are explored further throughout the record.

You’d be forgiven for thinking “Cosmic Power of the Infinite Shred Machine” would tear away at a million miles an hour with the kind of solo fests that the band built their name on, but it has more focus on riff work than you might expect, whereas “The Last Dragonborn” adds an Asian flair to the guitar patterns. “Heart Demolition” sounds like it was built using the framework of an ‘80s pop song, and has an absolute corker of a chorus, whereas the subdued gallop and pronounced keys in “Strangers” hark back to hard rock from the same decade. Both are ultra catchy power metal in the Dragonforce mould, but show that the band can cover different territory within the boundaries of their genre. They’re two of the better tracks here, and were penned by former bassist Frédéric Leclercq (now of Kreator), who will surely be missed going forward.

It was a few years ago that Dragonforce closed Maximum Overload with a superb rendition of Johnny Cash’s “Ring of Fire”, and they’ve gone the cover route again on Extreme Power Metal. On the agenda this time round is Celine Dion’s Oscar and Grammy winning mega hit “My Heart Will Go On”. Any of the emotional nuances of the original are pulverised by the breakneck pace utilised, and whilst it’s good fun, it falls a little flat in the face of the rest of the typical power metal songs on the album.

Extreme Power Metal is the best Dragonforce record for some time, and certainly the best since Marc Hudson came on board. The energy and enthusiasm that he and the band perform with is tangible, and it just makes the songs so much more enthralling. You can imagine they had huge smiles painted on their faces when they were recording, and as a listener it’s hard not to grin from ear to ear as well. For high octane, super catchy power metal, there are few, if any, bands that do it better than Dragonforce.

Extreme Power Metal is available now on earMUSIC, and can be purchased here.