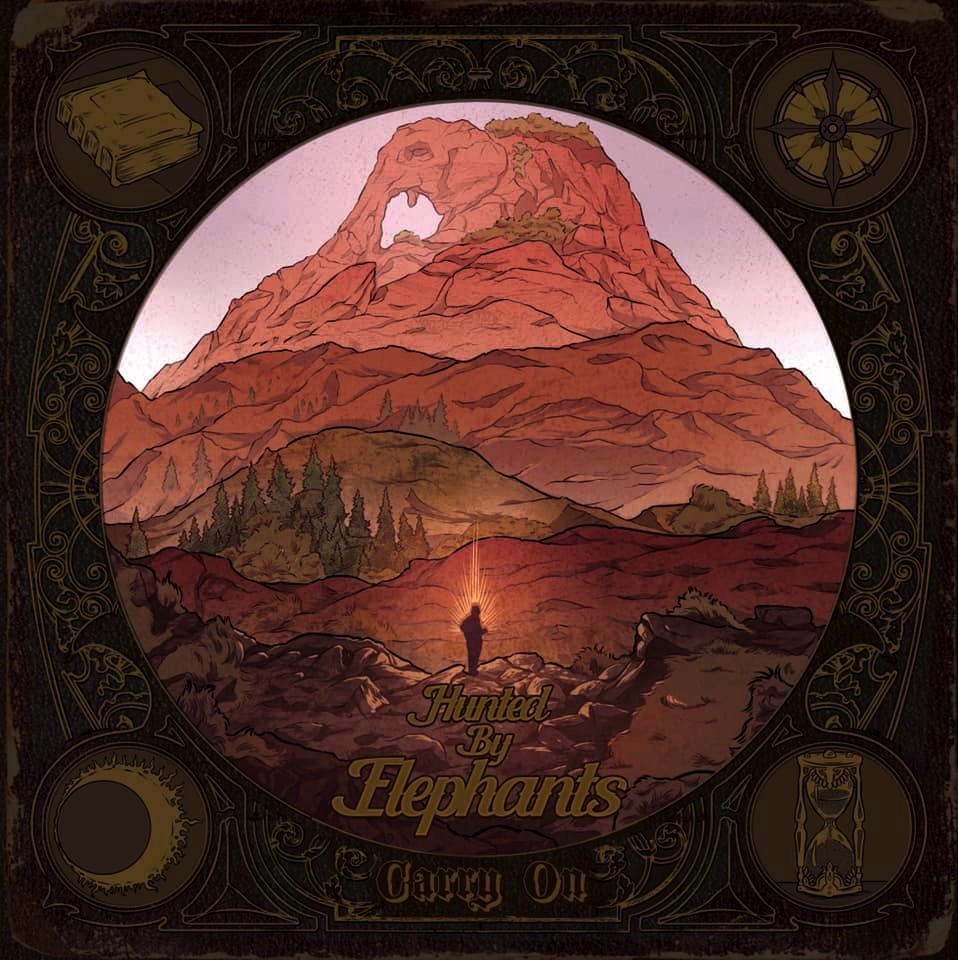 The outstanding debut album from Hunted By Elephants, ‘Rise Of The Elephant’ came out in 2019 and a couple of singles from it ‘Unnamed’ and ‘Human Eyes’ even brought them to the attention of the masses. Based in London, this quartet are now ready to launch their sophomore album ‘Carry On’. The first single ‘Let Me Be’ came out last November and on January 8th the title track will hit Spotify. So what do ‘Hunted By Elephants’ have to offer us?  Well, I think HBE have done a bit of hunting themselves, mainly into the distant past of 60s/70s Blues and early Rock bands of that era, especially those that used a Hammond organ.

The aforementioned single ‘Let Me Be’ is the opening track and should be familiar with fans now. A slow and raw riff is kept to the minimum, while Apostolos Liapis provides crisp and high pitched vocals. The strength of this song is reflected in the bands ability, to deliver a simple melody and make it sound incredibly dynamic. ‘Carry On’ cascades into a pool of soul searching. Very anthem like and taking a Coverdale/Whitesnake direction, it cruises and oozes with stacks of engaging allure. ‘The Weapon’ is written with so much intensity, switching from delicate strings to full blown anarchy,  I hear distant echoes of those long lost hippy bands from San Francisco.

‘Ghost Song’ is a mellow ballad and again HBE keep it basic. But for four and a half minutes you are thrown out of orbit.  Slowly easing into a jazzy rhythm, with majestic guitar and subtle backing vocals, it’s like a long cold drink on a warm relaxing day.

‘I was living centuries ago, When it was easy to grow old, All I know, is that I’m not in this world anymore, I stare into life as a ghost, A soul who’s been gone long ago, I’m trapped, in between these two worlds.’

We board an unstoppable ride with ‘Keep On Giving Me Loving’ racing along in true classic rock style. A colossal thumping number, it would be incredible to hear it played at a live show. It all gets down and dirty during ‘Electric’ while staying tightly to a blues rock theme. The grinding guitar of Roman Flourendzou adds shimmer and his ability glows in the limelight. ‘Believe In Something’ has all the groove and polish you could wish for. The vocals are high and the riffs grow to bring the whole track into accord. The heaviness of Ray Phelan’s bass and Alex Butticè’s ample stick work create irrepressible foundations, that allow this to be one that stands out. The last song ’Take Me Away’ begins in a demure and meek fashion, but the temperature soon rises, like a monstrous fever. Amazing vocals are accompanied with beautiful crafted guitar and as it descends to the final ‘Led Zeppelin like’ crashing bars, I realise this has been quite an emotional journey.

I see this band being a part of the NWOCR scene in the near future, they certainly belong there. But Classic Rock has many dimensions and it’s the earthy blues, a lavish style of guitar and truly absorbing vocals that will allow HBE to tread in the footsteps of those somewhat forgotten outfits, whose sound hasn’t been revived so much recently. HBE are a band that would fit easily on any festival stage, be it Rock, Blues or Prog. Although they list Rival Sons and Black Sabbath as influences, it’s early Deep Purple material that strikes me as the main point of reference. What they come out with though is not muffled, heavily psychedelic or in the slightest, retro rock. Having grabbed the roots of those early pioneers, HBE have pushed and shoved that old Hammond organ into the 21st Century.

Highlights – Let Me Be, Ghost Song, Believe In Something.

TRACKLISTING – Let Me Be, Carry On, The Weapon, Wiseman, Ghost song, Keep on Giving Me Loving, Electric, Towards the Light, Believe in Something, Take Me Away.

Apostolos Liapis –  “For us, our second album is all about the chemistry of the band in our performing and song-writing. We always wanted to run with how we recorded the first album and how records were made back in the 70s , all the instruments recorded playing live together. We did this to capture the musical energy of the band and the songs.

Learn more about Hunted By Elephants on their social pages below –

Purchase ‘Carry On’ From MusicGlue.com  HERE  – Available on CD, Stream or Download.

It’s also worth listening to the debut, ‘Rise Of The Elephant’ if you haven’t discovered it yet. It’s available, along with the bands merchandise HERE