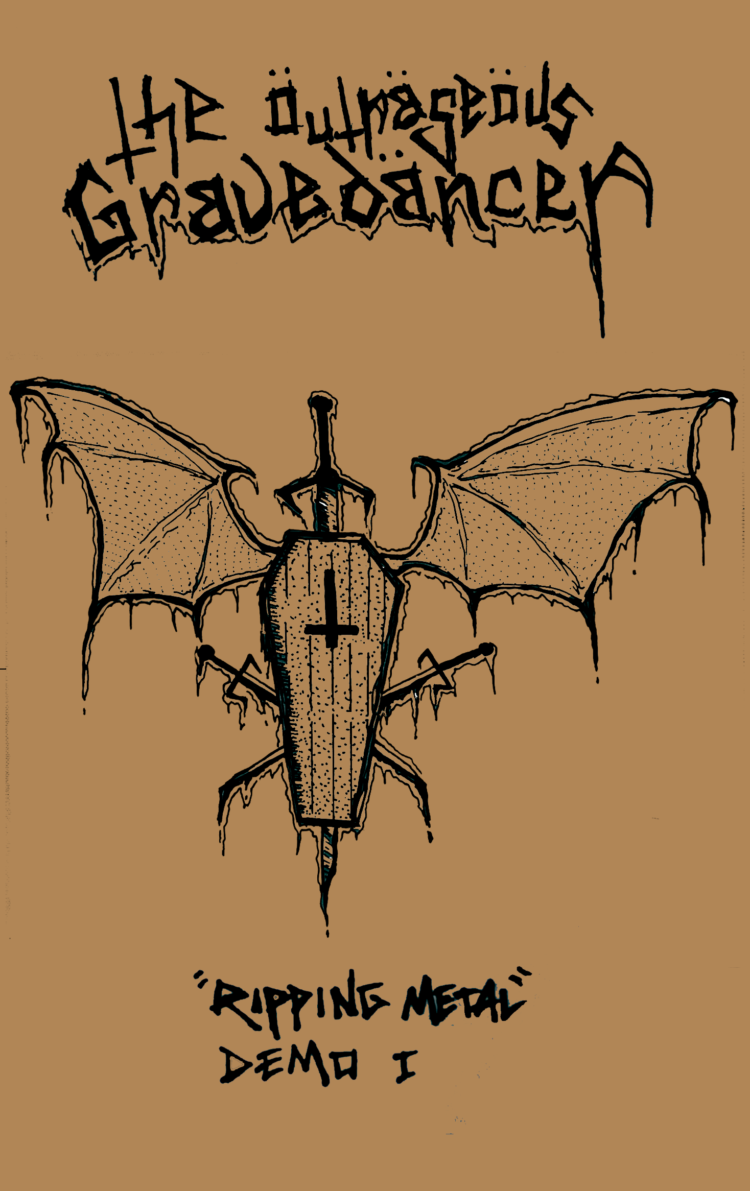 The nostalgic quality of metal is an undying art. Thousands of bands across the globe pay tribute to the heroes of old, some floundering as dreadful rip offs whilst others manage to perfectly capture the essence of the old school scene. GRAVEDÄNCER thankfully fall into the latter category.

Ripping Metal is the band’s debut demo due to be released on cassette tape format, fully reminiscent of the times of cassette trading in the underground scene. The artwork is stripped back, graffiti like with a Motörhead style umlaut stamped proudly on the a.

This is a demo that combines the rawness of early NWOBHM and the primitive beginnings of the first wave of black metal.

Appropriately Ripping Metal kicks off with opener Black Winds of Doom, the riffs chugging and vibrating with pure garage like fuzz. What is instantly notable is the sheer sonic worship of Venom, the vocals growling and snarling in trademark Cronos fashion. The atmosphere here and throughout the demo is simply evil, capturing the darkness of early Slayer and Sodom whilst still retaining the early speed and melody of NWOBHM. GRAVEDÄNCER is essentially Motörhead if Lemmy had adorned himself in black eyeliner and joined a cult.

Magic Circle really has that gritty “I’m an early 80s metal band starving and playing in my basement” sound, the voice echoing, distant yet so close with those wicked guttural vocals.

Title track Ripping Metal lives up to its namesake, charging forth in all of its speed metal glory. The solos are fast, melodic and sound fantastic against the relentless galloping rhythm, the bass occasionally creeping through in pockets of melody.

Evil Spell can be likened to Sodom’s debut album In the Sign of Evil, the music relatively simplistic in its approach yet capturing that dark atmosphere perfectly to truly create a track that permeates a formidable aura. I’m not sure whether it’s because I’ve recently played Lord of the Rings on the PS2 but Evil Spell would make an iconic soundtrack to the haunted Paths of the Dead.

It would be blasphemous to not include a direct Venom cover and GRAVEDÄNCER’S Welcome to Hell truly delivers. It’s like the original in all elements yet the tempo has been reduced to a pace of slow motion which still works amazingly well. The guitars are beautifully heavy and fuzzy in the middle section before the spoken word part. Speaking of, this is where the drums truly flourish, liberated from structured verses and choruses and free to express technical playing.

In this promising cassette demo, GRAVEDÄNCER perfect the evil essence and roots of speed and early black metal. As GRAVEDÄNCER are driven by the old school feel, the band could easily be repetitive and bland, regurgitating acts that we already know. Yet this is not the case. GRAVEDÄNCER have created such a nostalgic underground demo whose songs are their own yet still obviously play homage to acts like Venom and Sodom. Crafting a wicked and dark atmosphere is no easy task and GRAVEDÄNCER have pulled it off brilliantly.

Now I just need to go find a cassette player.

Ripping Metal is out internationally via Helldprod records on January 29th