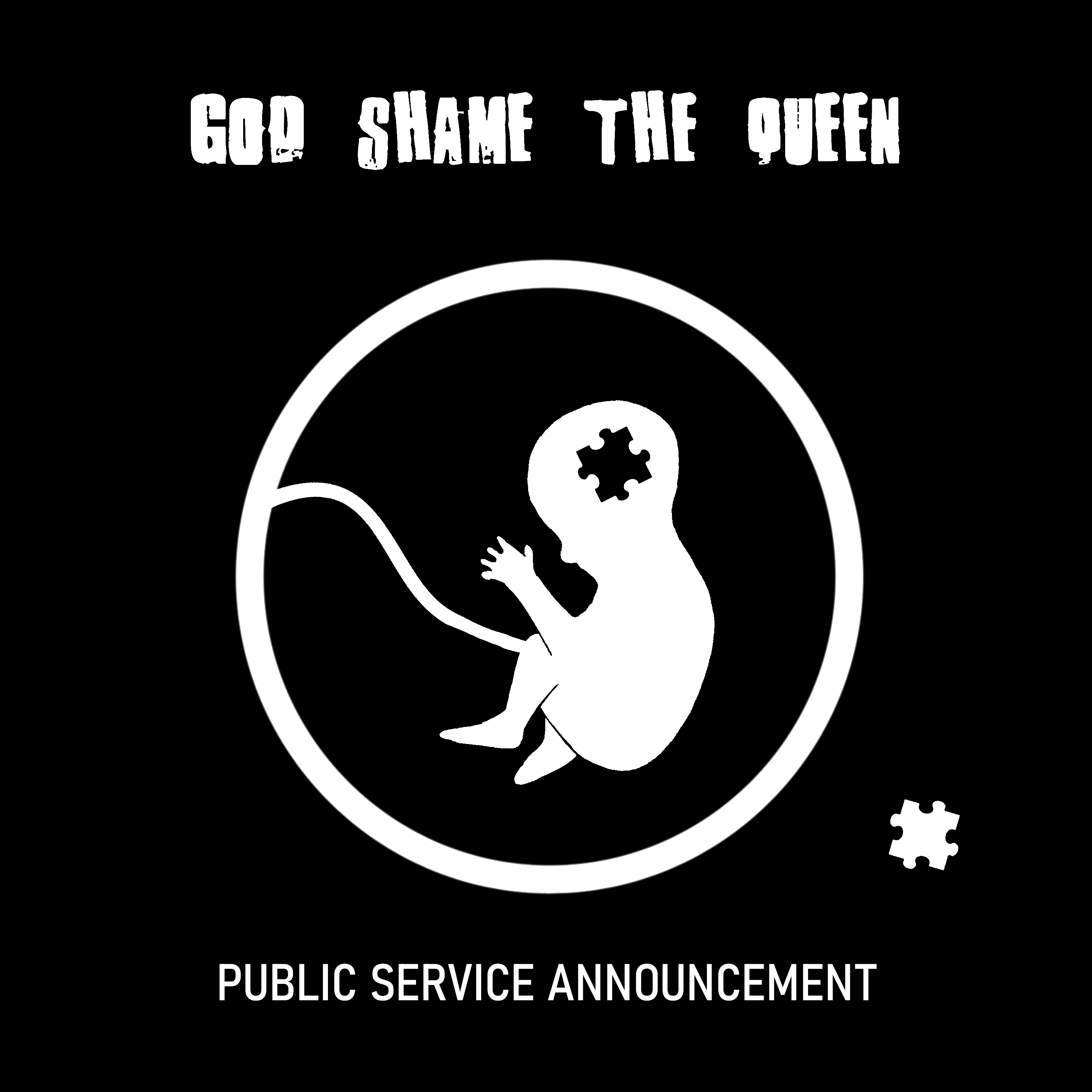 Birmingham stoner/punk duo God Shame The Queen formed a few short months ago in the middle of the pandemic. With little else to do but jam out, the songs wrote themselves very quickly, and with time to practice and record in the Boooom Room, a recording studio in the heart of the Jewellery Quarter, we find ourselves with a debut EP that’s come together from scratch over a time where most bands are unable to do anything or even play. With Jack on the bass, David on the drums (also of Slump and Fractura) and both sharing lead vocals, they take a stripped down approach, although the thick wall of noise from the bass and sheer power from the drums would leave you surprised to realise this.

The EP dives in with wailing feedback and a distorted bass riff that could have come straight from Lemmy Kilmister’s library of licks. The punk beat and aggressive vocal delivery does give ‘Stains of Love’ a distinct Motörhead flavouring, although the clever effects used over the song suggest an influence from psychedelic rock that’s hard to miss. With a drop in tempo and breakdown near the end that really makes it difficult not to bop along with as it kicks in for the song’s coda, there is a lot squeezed into less than three minutes. It’s well-written and memorable, and understandably the band’s first single. ‘Greedy’ follows a similar formula, with a raging punk energy and psychedelic flourishes. The anger spilling out of each amp and drum head can be heard in every note, and it’s the heaviest song on the release. Definitely one to break the speed limit to.

‘Despierta’ draws the pace back with seductive stoner riffs and laid-back beats, that ultimately breaks up the EP really well. With intensely political lyrics, all in Spanish (the title simply means ‘wake up’), we imagine a younger Zack de la Rocha spitting out similar lyrics over a similar vibe as he was in his prime. Of course, this isn’t happening here, but ‘Despierta’ does represent another element to GSTQ with, again, a track that’s surprisingly memorable, staying in your head, with lots of hidden details the more that you get to know the song. The title track rounds off the release, with vocal interplay and raged-up stoner riffing. It feels more like a jam than the others; its runtime is longer, and there’s more riffs and musical details, and it weaves in and out of different sections. Although there’s lots of good ideas, some of which are pulled off really effectively, ‘Public Service Announcement’ doesn’t hit home as well as the others on the EP. Although it’s a little unfocussed at times, it still feels like a good conclusion to this release and pretty much sums up the whole range of this band into one track.

GSTQ’s debut EP will appeal to fans of Queens of the Stone Age, Rage Against the Machine and Motörhead with its melting pot of bluesy riffs, pounding drums and spitting vocals. A promising start from the duo, who create a surprising amount of energy. Don’t wait out on this band.