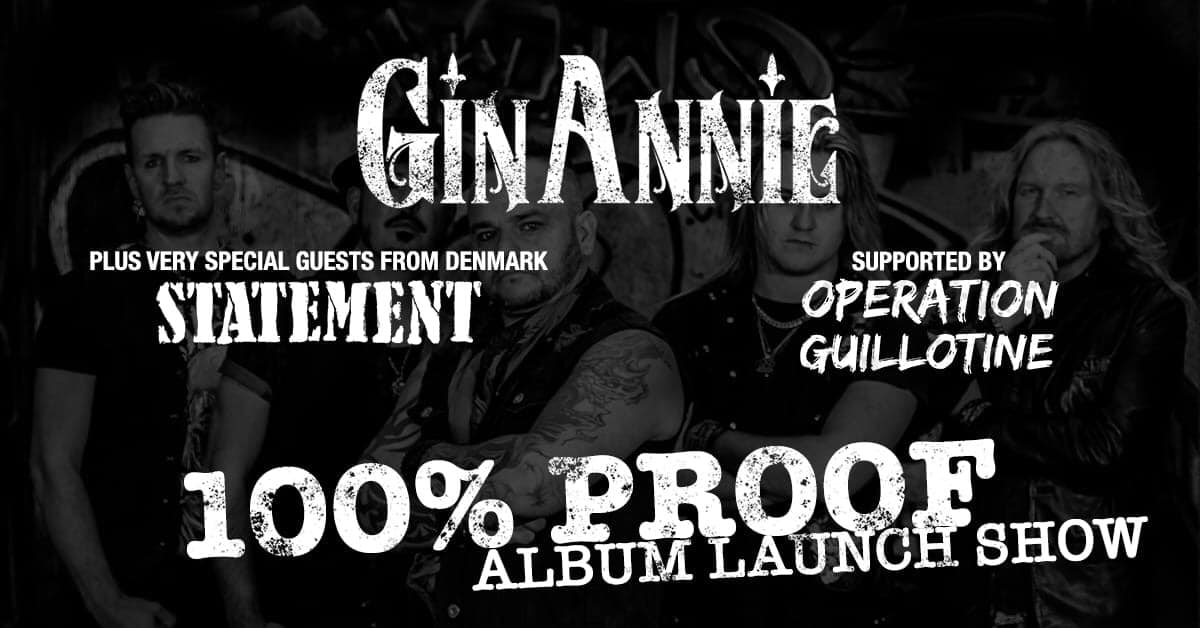 I heard good things about Operation Guillotine but unfortunately I got a wee bit lost (fuck you new roads, road closures, sat nav meltdowns, full car parks, wind and rain!), aherm anyway… I got there just in time to catch the last half of Statement, flown in all the way from Denmark to play here tonight, that’s pretty special, no nonsense balls out rock ‘n’ roll to warm the crowd up that had amassed nice and early to catch these guys.

A great intro from Pete K Mally, rock comedian, and fellow Midlands Metalheads DJ, had us all laughing as expectations built. Catch his breakfast show right here starting this Saturday morning 10am-12 midday. The tension is rising, there’s a buzz in the tightly packed Slade Rooms, the Midlands are out in force tonight to support our local boys.

Gin Annie take to the stage to rapturous applause, opening with ‘New Bad Habit’ and ‘All I Want’, followed by ‘Fallin’ which I am still singing the next day, catchy fuckers! Next up is my favourite ‘Next 2 Me’ and by now I’m up the front singing along, arms in the air and having a ball, along with the whole room, the place is rammed and temperatures are rising, so it’s a good time for the goosebump inducing slower tempo of ‘Haunt Me’, followed by another favourite of mine ‘Damage’, which wouldn’t be out of place on a Def Leppard album.

We are then treated to a brand new song ‘Already Gone’ and as Dave says ‘if we can’t play it here where the fuck can we play it’, we’re glad they did try it out on us, as even on this first album release day clutching their shiny new album in our hands, we are already hungry for more and it won’t disappoint judging by this one, opening verse had my hairs on end!

Something more familiar next with album opener ‘Love Ain’t Here’, Jack Ryland-Smith’s drums hitting us right in the chest, with the one two combination of Byron Garbett and Brian Green on guitars punching us square in the jaw with heavy riffs and catchy licks, it’s a powerful sound and they compliment each other perfectly, all held down by the aptly named Phill Hammer on bass, it really is the perfect powerhouse to compliment David Foster’s melodic voice. They look the part too, one bugbear of mine is bands that come out in yesterdays shorts and t’shirt staring at their feet, or worse… a coat and scarf like they’re waiting for a bus! A live show is about the full package and I love to see stage outfits, rock star histrionics and some on stage personality. Gin Annie have it all, in spades!

Next up is Planet Rock hit ‘Chains’ and the reaction from the crowd to this one was off the scale, the band’s little faces taking in the adoration at the end of this song was a bit of a lump in throat moment for all, we just wanted to grab their little cheeks in our hands and give them a munch, bless them! The camaraderie on stage is great to see and being on the road together has clearly cemented them as not only a band but brothers too, not entirely sure where along the way the bumming and on stage blowies started, but hey we’re all friends here!

I am taken aback by the difference to last year when I saw them at The Flapper in Birmingham, that was a great night and I came away uplifted and humming the songs of a great local rock band. Since then the guys have put the work in and gone out into the world touring the UK and Europe, experiencing the highs and lows of the music biz, signed a record deal, been taken under the wing of Planet Rock, and tonight they have returned home rock stars, tight as fuck, owning the stage and quickly outgrowing even the Slade Rooms, to say we are all very proud of them is an understatement. Tonight it’s plain for everyone to see that they are special, they have that elusive ‘it’.

The mark of a good show is how quickly it goes by and in what felt like the blink of an eye we are at closer ‘Born to Rock n Roll’, fitting, because they are.

I picked up a CD at the merch stand and saw CD’s and t’shirts flying out over the counter one after the other, it was a great sight to see, and having to queue just to speak to the guys afterwards is statement to how much love was in the room tonight. There’s a new wave of classic rock in the UK right now, with Gin Annie quickly rising to the very top of it, gaining fans by the truckload wherever they roam! Rock is not dead when it’s this good! Just ask the guy in the crowd sporting his Gin Annie tattoo!!!

I said it last year that this is a band you should catch whilst they’re small, if you didn’t then you may already be too late!

Tonight we witnessed local lads turning into legends right before our eyes, it was a beautiful sight.

Check out our review of the new Gin Annie album ‘100% Proof’ by Diane Davies right here.