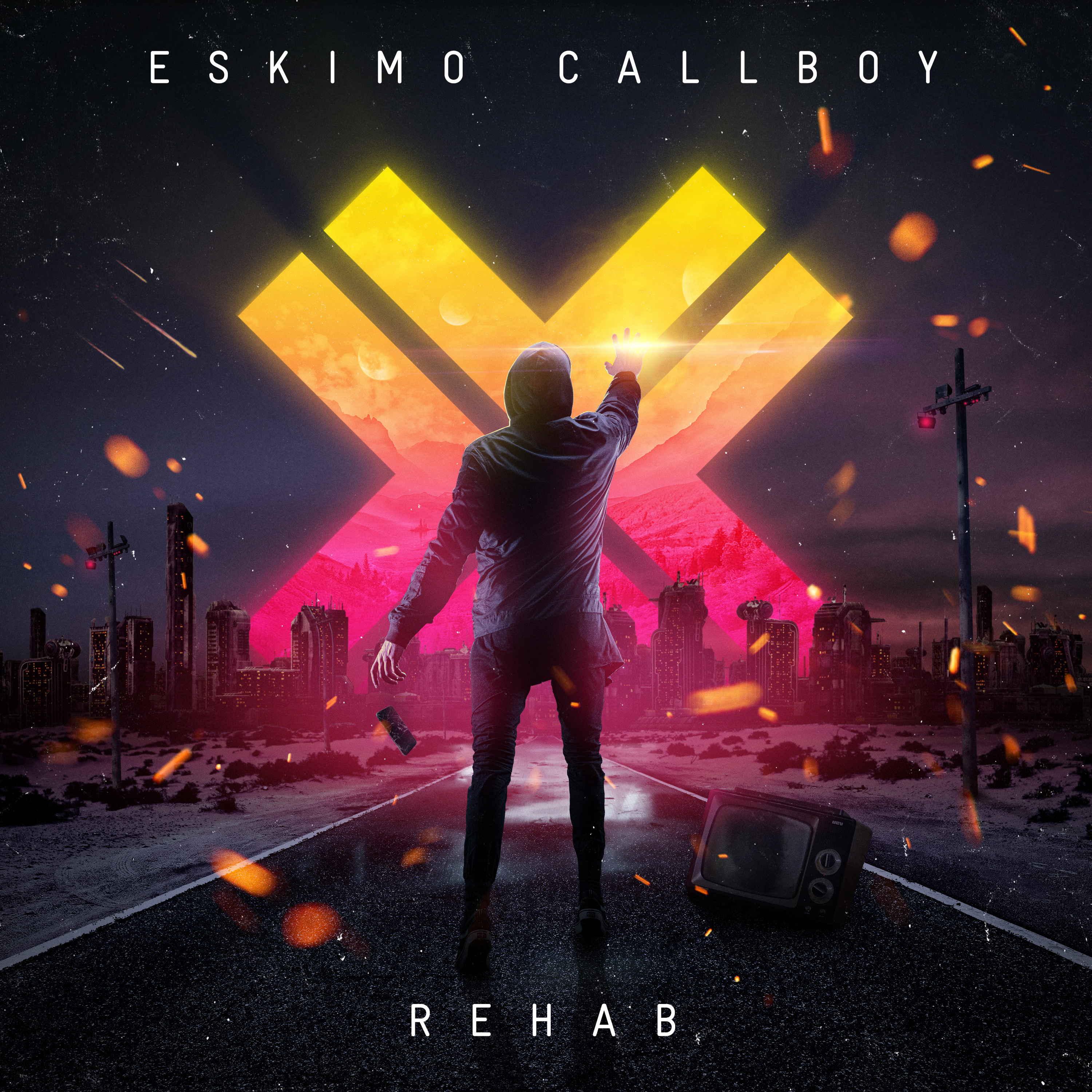 Two years on from the controversial fourth album ‘The Scene’, the German electronic-metal band Eskimo Callboy have returned with their new album – Rehab. Over the past decade, it’s fair to say they have attracted attention, with their love-it-or-hate-it music style, coupled with outrageous lyrics and gimmicks. Their sound is similar to that of Crown the Empire, with the band also stating influences from bands such as Asking Alexandria. That aside, let’s get stuck into the album.

Following an interlude, the album kicks in with the title track – Rehab. This has everything you want from an Eskimo Callboy song. It’s catchy, it flows, and it’s got a solid structure. Rehab still hits hard enough, and it has elements of rap and clean vocals, which makes for a well-balanced single. After a minute-long breakdown track, we come to (probably) the best song on the album – Hurricane. Similar to Rehab, it’s carefully put together, has good dynamic contrast between sections and expresses plenty of energy. What sets this apart from the rest is the breakdown section. The triplet rhythms create a whole new feel to the song, and the drums really drive it, pushing the energy forward by retaining a solid 2 & 4 backbeat.

Disbeliever keeps the album ticking along nicely, following on from previous songs by opting for a similar structure and mostly clean vocals. Although it lacks the finesse of other tracks, it makes for another solid song. You begin to realise how Eskimo Callboy are trying to appeal to new and different listeners, whilst still allowing enough creativity in their songs. It’s a hard balance to get right, yet they’ve shown that they can pull it off. I have to give them credit, as they’re still trying to expand their fanbase whilst keeping a signature sound. I think that given their history, this is a smart move by the band and a step in the right direction.

Track number 6 off the album can be summed up by it’s title – Okay. This starts to create a different feel for the album. You feel like you’re walking on a tightrope when listening to it. It’s neither one thing or another, but rather a strange mix of lyrics and instrumentation that doesn’t quite fit together, which is a bit of a shame. I can’t help but feel if this was arranged or executed in a different way, it could’ve been up there with their best tunes. The main strength of Eskimo Callboy is that they have creativity in abundance, which works well with their electronic sound. It allows them to incorporate various different sonic elements into songs, enabling them to express their creative side really well. Despite this, their greatest strength is their greatest curse. At times, they can almost be too creative, resulting in a song that feels a bit overdone or forced. For example, tracks such as Okay and Nice Boi score high for creativity, yet it feels like they were a result of too many ideas thrown together.

Supernova draws in a lot of the pop and electronic influences, and it makes for another track that could be fit for radio play. This is actually a really important song for the album. While it gives fans a fresh sing along song, it provides the album with some breathing space. Made by America feels a bit forced, with the muddy production ruining the heavy parts of this song. The lyrics to Nice Boi aren’t quite as over-the-top as the music video, although it definitely highlights the gimmick-like side of Eskimo Callboy. It’s worth bearing in mind that Eskimo Callboy are very much a band that don’t take themselves too seriously and want to have fun with their music. To really enjoy it, sometimes you just have to have a laugh about it. Also, because of the nature of their songs, people would appreciate them more when they’re working out in the gym or at a house party. You know what you’re getting with Eskimo Callboy. Towards the end of the album, it can feel a bit repetitive, with Lost and Prism sounding similar to the content that has preceded it, gradually filtering out towards the conclusion of the album.

For anyone who wants to listen to this album, I recommend that you do so with an open mind. Like I mentioned before, this isn’t a band that takes themselves too seriously, and certainly not a band to jump on the metalcore bandwagon. They have a certain sound and whilst they’re still evolving, they won’t abandon it. On a whole, it has pros and cons, skippable songs mixed in with more memorable ones. Since their last album, Eskimo Callboy have improved and matured whilst adjusting their sound to appeal to a wider audience. While the average fan of metal might still hate their sound or what they’re about, if you’re looking for something different to listen to, Rehab is worth a listen. The album could do with some polishing, clearer transitions and definitive endings would give Rehab an extra 10 percent. Although the German outfit aren’t quite the finished article, they’ve shown that they’ve got something about them.

Rehab is out November 1st via Century Media Records and can be purchased here.