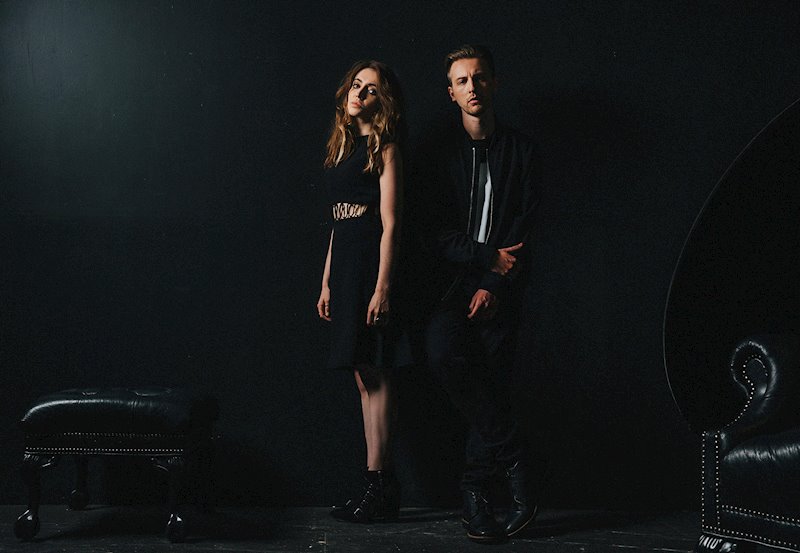 The London-based alternative duo’s next wave of music comes in the form of debut album, 45. Halloween continues on with this seamless blend of electro-synths and heavy rhythm guitar that is Rebecca Need-Menear and Jamie Finch’s masterpiece. It may remind the listener of Pvris fused with Flyleaf’s melancholic and sinister melodies, but Anavae have honed an album that is entirely of their own genre.

The twelve-song album lineup begins with the epic ‘Afraid’, a track that demands to be heard with a marching rhythm and percussive synths layered with orchestral patterns. Finch’s guitars are seamlessly fused with these orchestral sections in the choruses, setting the course for the darker and more sinister undertones of the album. Followed by the roaring guitars of ‘Human’, introduced with an eerie chorus of “I want to skin you alive”, the album promises an extremely catchy playlist of songs. ‘Skeleton’ literally sounds like its title. With the percussive synth movements, orchestral underlayers and eerily crafted harmonies, Halloween lives on in this track.

Featured on BBC Radio One on Annie Mac’s Future Sounds, ‘High’, the anthem of the album, features a showcase of Need-Menear’s vocal prowess and Finch’s flawless delivery of the driving chord progressions that fuel the vibrant fire of 45. The dramatic, scratchy guitar-like synth at the bridge echoes more electronic parts of Linkin Park’s A Thousand Suns, reminding us that Anavae have evolved since their first EP, Into the Aether, released back in 2012. “All these fantasies are bringing me down”, the lyrics explore the realities of life and human connection, shooting down fantasies and superficiality. The band decides to slow things down a little with tracks ‘Night’ and ‘California’. Featuring a lamenting orchestral bridge and Need-Menear’s ghostly falsetto, ‘Night’ resonates early Evanescence and Within Temptation. This song is pleasantly melancholic with its heart-beat piano and gentle synth patterns in the choruses. Meanwhile, ‘California’ as the final track of the album is a little less haunting and lot more anthemic, offering the listener a cool down after the epic journey that this playlist lays out.

But if there’s one thing that listeners take away from this album, it will be track number seven. ‘Not Enough’ will be your new favourite song where its intro anticipates a pop track but added to the high-tone guitar-synth and heavily energised rhythm guitar that follows, it is an extremely catchy segment of the album and reminds the listener loosely of Tonight Alive’s ‘Temple’. This is one of the tracks that makes you want to head-bang until you’re dizzy. Guitarist Finch almost felt like giving up on music when he finally bashed out ‘Not Enough’. For what it’s worth, I’m ecstatic that he decided to continue because this song is a banger.

Like ‘Not Enough’, in the space of three and a half minutes, ‘Dirt’ concisely constructs the dichotomy between rock and electronic music and amplifies the tropes of both genres. At first, the track seems almost dance club-esque but along with the chorus, the listener is pulled back into the realm of rock, echoing threads of Wolf Alice and Flyleaf’s earliest albums. Doing this, Anavae reminds us of the boundless possibilities of musical genres through the interplay of pulsing percussion, glorious electro-synths and heavily distorted guitars.

Anavae’s 45 is a showcase of whirlwind vocals, flawlessly layered guitars, upbeat melodies and energetic synth sounds. Every track is fully-formed and the band builds a unique and innovative album that makes the listener want to dance and cry at the same time, but nonetheless, I think many will have found their next favourite band.

45 is out now via A Wolf At Your Door Records and can be purchased here.