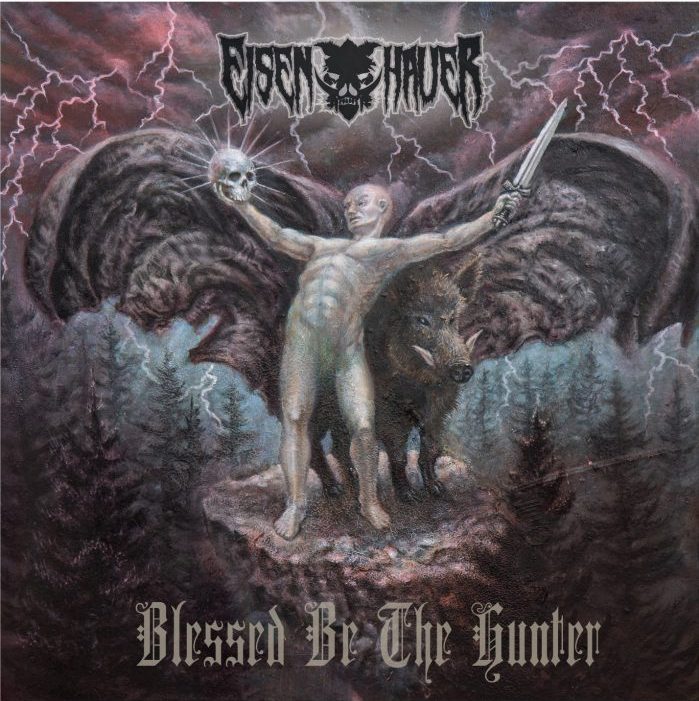 Its been five years since German metal band Eisenhauer released their EP Horse of Hell and even longer since their first full length album was released in 2012. Blessed Be The Hunter is an eight-year evolution of the band, demonstrating their refined sound and complete embrace of mythical and Norse themes. The album artwork certainly screams drama and battle cries, even if admittedly a bit muddled and confusing. I can’t quite figure out whether the wings belong to the small naked man with blurred anatomy or the boar. Perhaps this in itself is a topic of philosophical debate. Or just a naff drawing. You can never be too sure.

Anyway, back to the matter at hand. Its no secret that Eisenhauer are influenced by metal greats such as Grand Magus and Danzig. Hell, even their band logo looks like the long-lost sibling of Danzig’s iconic lettering. With this in mind, I was interested to see whether Blessed Be The Hunter would pay tribute to these influences whilst still maintaining Eisenhauer’s individual sound.

Opener Priestess of Delight begins with a quintessential slow Danzig guitar melody that could sit without question on his debut album. In fact, when listening for the first time I’m almost waiting for Danzig’s trademark yell to kick in. The riff translates into a classic metal palm muted chug that provides the background for the vocals which are refreshingly unexpected on first listen. Christian “Waxe” Wagner has a low and deep gruff tone yet oddly gentle, glistening with clarity like red wine being poured into a goblet. There’s a familiar blend to his voice, like JB Christoffersson of Grand Magus with a subtle sprinkling of Load era James Hetfield. It’s a beautiful dichotomy that serves Eisenhauer well across the album.

Under cracklings of thunder and rain, Gods of Pain unleashes with an equally thunderous riff and pounding drums. There’s a brief pause where Waxe launches into the first line, his vocals isolated and emphasised in the silence. It works brilliantly before propelling off into the verses with the rest of the band. It’s a longer track then Priestess of Delight and I find my attention span dwindling sometimes. Yet I suppose with a subject matter so imposing as the creation and destruction of Gods, a brief track won’t cut it in terms of levels of indulgence and formidable atmosphere.

I often find myself swaying to the vocal melodies in Release the Beast, they really do transport you to another realm entirely. The words within the verses are so pronounced and crystal clear that it’s so satisfyingly in sync with the guitar riffs. For vocals alone, Eisenhauer are worth the attention yet the guitars and drums elevate the band to a solid listen. Tempos and tones consistently shift which generates a refreshing and engaging listening experience. This is particularly evident in just over half way through as the tempo quickens into a thrashier dimension yet still retains that glorious melodic flair. Waxe’s vocals on top of this transforms the track into a victorious ending with many thoughts of wielding swords and shields.

Sun Under My Breast is a beautiful instrumental interlude. The song begins with the crackling of fire and wind which swirls into an absolutely stunning acoustic guitar melody.  It seems like its sole purpose of creation is to be the accompaniment to perished Vikings reaching the gates of Valhalla.

Wild Boar Banner’s chorus is intrinsically connected to the Sun Under my Breast interlude with thoughts of Vikings rousing themselves to loot and plunder unsuspecting victims. It’s a good solid metal track that’s a great introduction to Eisenhauer for those who haven’t listened to them.

Caws of crows and a wailing scream is the dramatic opener to Ghost Warrior. One thing I can take away from this album is that Eisenhauer do love a good sound effect board. There’s great duelling guitar melodies once again and a fantastic solo that retains the speed and melody of the song yet brings another dimension.

Ode to the Hammer is a classic title amongst metal bands obsessed with Norse mythology. Slow and foreboding riffs conjure images of marching to battle whilst there’s another edge of a Danzig tone.The vocal melodies in the chorus are beautiful, providing another great juxtaposition with the heavy riffs. There’s another swift shift in tempo and I’m overjoyed to hear the bass having a moment to shine amongst the guitar vibrato. Waxe’s voice somehow goes even lower after this instrumental interlude, commanding warriors to gather their shields. There’s a fantastic guitar solo to conclude this segment, finger tapping in a Norse version of Kirk Hammett’s infamous One solo.

Mountain contains another chugging riff with the bass occasionally layering over the top. These little touches keep things fresh and exciting. The lyric within the chorus of “You make me stand like a mountain” evokes a simple yet effective feeling of strength.

Tyrannus is an instrumental, containing a spooky opening with a man breathing heavily. The track would be a great musical accompaniment to a haunted house or trudging down the road on Halloween bedecked in ripped clothes, Zombie face paint and oozing wounds. Cult is a fantastic album concluder, victorious with shifting low and high vocals from Waxe.

Blessed Be The Hunter is a brilliant metal album containing no airs or graces – it’s heavy metal to the core. However i am a little concerned whether the similarities to Danzig and Grand Magus may be a bit too much for superfans of these bands.Yet this is still a worthy individual effort. Eisenhauer do manage to express their own form of traditional heavy metal whilst intertwining these influences. Although there’s no doubt that these inspirations are at the forefront of their sound.

Highlights: Priestess of Delight, Release the Beast, Ode to the Hammer

Eisenhauer are a part of Rafchild Records.