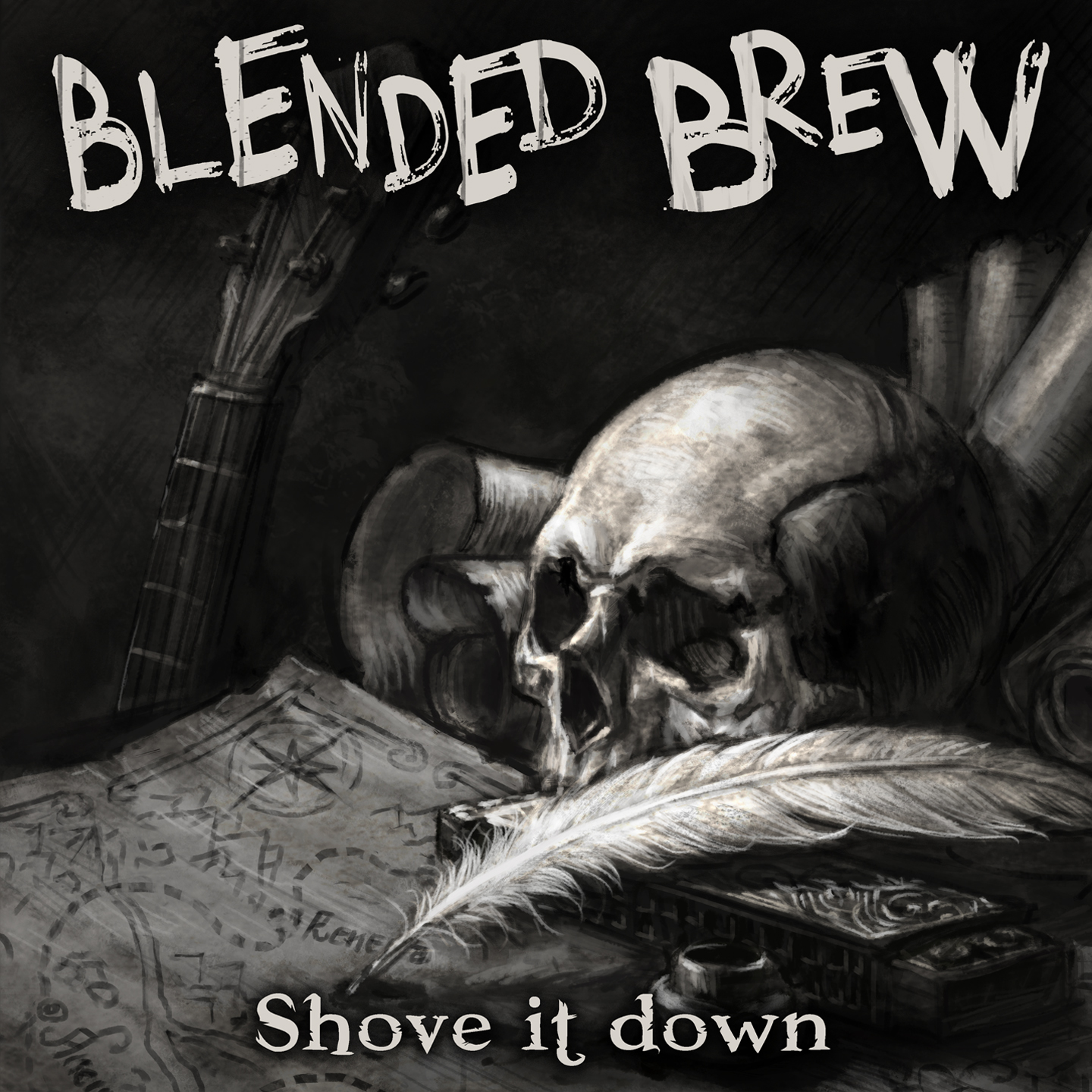 Blended Brew is quite an appropriate name for this Danish outfit, their style is a blend of retro blues, gritty riffs and intense keyboards. They list Deep Purple, Rival Sons and AC/DC as influences, but from listening to ‘Shove it Down’ you could name a dozen more, as there is a huge amount of diversity. Having supported several names over the years, from Hollywood Vampires, Manfred Manns Earth Band, Georgia Satellites to even Alien Ant Farm, tends to confirm how blended they are.

‘Ancient Alien’ has a repeating bounce of a beat that just keeps on all though the song. The drums of Christoffer Beck really stand out, reminding me of those ‘glam’ bands of the 70s. Jimmy Månsson comes in and gives it more retro on the vocals, so combined with the Hammond organ, it’s quite a stirring and exciting introduction to Blended Brew. The next track ’Stay In The Shadow’ is more pressing with bluesy overtones. It’s a hazy ride with stacks of deep cutting guitar and is followed by even lower and slower moodiness on ‘Woman I Need You’ what a groove sucker, I don’t think you can get any closer to a state of euphoria just by listening to one song, it’s a masterpiece. Saying that, ‘Electrified Loser’ a more upbeat creation, is tremendous, it’s another that flows along with stomping keyboards giving it piles of blues/rock richness. Think of those easy to grasp renditions by Free, Bad Company and Humble Pie, this is very similar.

The start of ‘Give Me Your Love (Rival C**t ) takes you on a more mellow path, then it’s a trippy and heavy riff. Again the vocals are splendid, Månsson sways from funky rasping to soulful cool and then hits the top of his range to blast out more direct lyrics. It’s a track that gathers momentum and is like pouring hot metal onto ice, so varied and absorbing and like letting off steam. The title track ’Shove It Down’ continues with the bluesy vibe, but it has a pulsating beat from the off. Smooth and chanting backing vocals are based on an increasing amount of pressure from the keys and I love the way it carries on regardless, plundering all in it’s wake.

Track 7 of 10 is ‘If The Streets’ and may take a couple of plays before you get it. Experimental and it wavers in direction, the ‘Whoo Hoos’ are intertwined with off key discord and crashing drums. The tempo is broken up nearer the end and it’s certainly a challenge. ‘Run and Hide’ couldn’t be more of a contrast, a powerful stadium rocker with loads of stomp and melodic harmonies. It’s an adrenaline rush to the brain and the result is total bliss. ‘Renegade’ with it’s ‘Whitesnake/Coverdale’ warbling and stabs at romantic heart wrenching is another that may take more than one listen. Only halfway through does it start to bite and then the melody sticks, the keyboards are outstanding though. Last up is ‘Don’t Say No’ with just simple classical piano by Lord Sebastian Groset and the vocals are stripped way back. The ballad gently grows and turns into a crescendo of sheer brilliance, before dropping back down to the same simplicity as at the start.

This is the second album from the Danish band that aspire to recreate old school 70’s rock. Having a Hammond organ.Recording the tracks live and then running them as analogue on a tape, to get the required effect, is a stroke of genius. It was actually put together before the addition of Lasse H. Mortensen on bass guitar, but after watching the video above, of the title song, he has fitted in really well. The bands ability to give off that rawness and to basically turn back the clock deserves so much credit. The album is an interesting and has a varied selection of songs, yes, there are a couple that make you wonder, what’s happening here. But that’s what music is intended to do on occasion and it does add some character to the finished article.

Having played all over Europe, China and in the US, they are down to support Marco Mendoza in October in their native Denmark, virus permitting on that one. I can’t see that they have been to the UK other than visit the Abbey Road Studios to finish their debut LP ‘Hand Patrones’ in 2015. Which is a pity, hopefully they will consider touring here once everything is back to normal, because they would go down a storming treat.

‘The bands ability to give off that rawness and to basically turn back the clock deserves so much credit.’

Highlights –  Woman I Need You, Electrified Loser, Shove It Down, Don’t Say No.

Stay in the shadows

Woman I need you

Rival C**t (Give me your love)

If the streets could talk

For more information about Blended Brew and where to buy merchandise, see below.