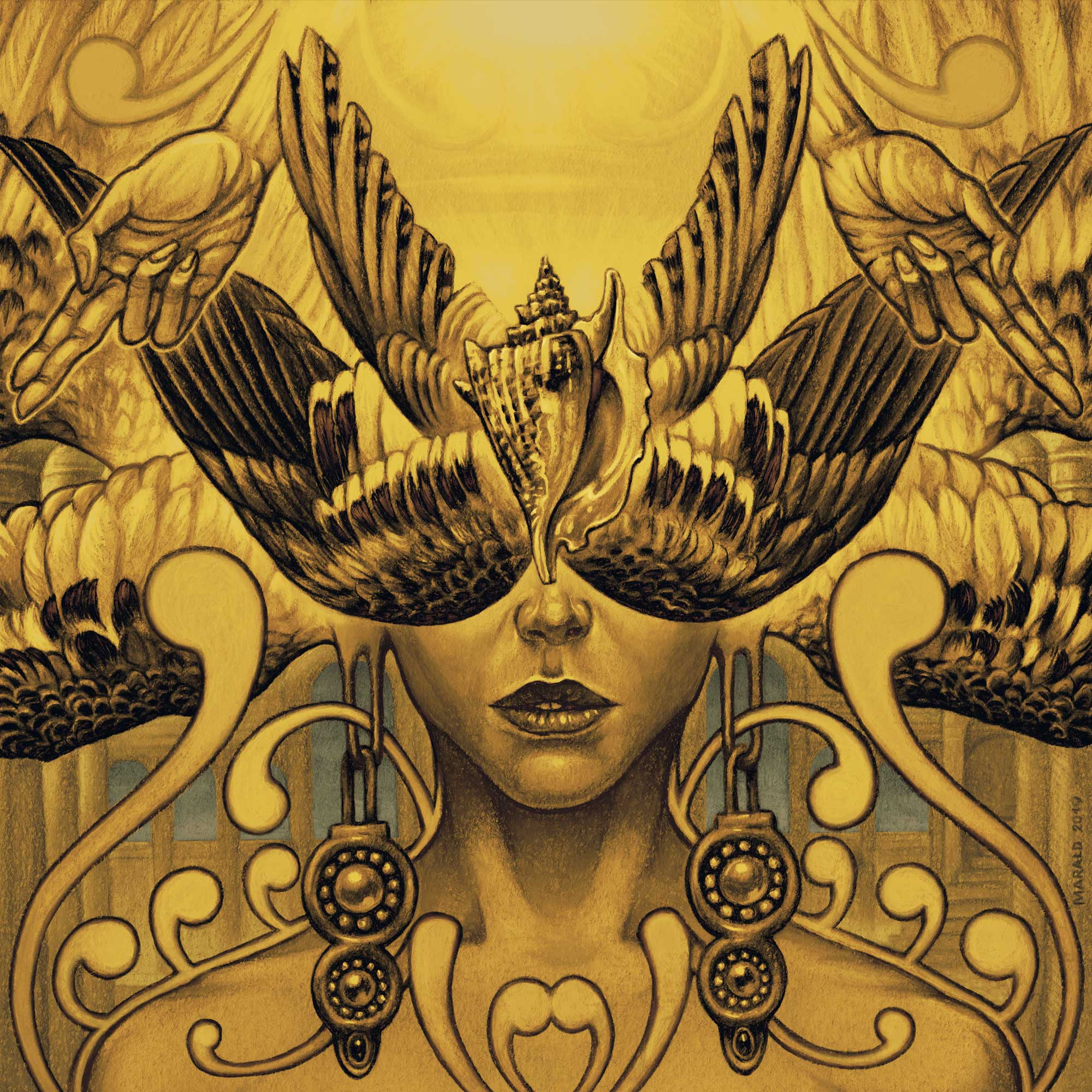 Formed only in the early 2010s, Dvne (that’s pronounced Dune) dropped a couple of promising EPs before the mesmerising Asheran was unleashed in late 2017. It seems hard to believe that it was only a debut album; Dvne demonstrated a distinctive sound that mixed sludge, doom, post-metal and progressive rock into a cauldron. It seems a lot of cutting-edge, modern bands right now are ignoring the boundaries of single genres and creating music that sounds right for them, and Dvne are definitely a part of this movement. Asheran was a hell of a statement – it’s hardly left my regular rotation after I was first exposed to it – could they top it with their second album? Put it this way, the flaws on Asheran only become apparent when you listen to Etemen Ænka. With a rotated lineup, including a new, full-time keyboardist, the songs are longer, stronger and set the band out to conquer.

‘Enûma Eliš’ opens Etemen Ænka with soaring melodies and a musical snapshot of what is to come over a relatively short runtime. It’s been designed to open live shows, and suits its place at the start of the album well. With dizzying guitar work, dynamic contrast and the synth, new in the mix, without being overbearing, it seems to be Etemen Ænka in a quick nutshell. Segueing into ‘Towers’, which seems for all intents and purposes a continuation of the song before it, it runs for almost twice as long, with lots of variety in tempo, key, mood (etc), showing off Dvne’s full scope of creativity. Thematically, Dvne deal with science fiction; something that the inclusion of a keyboardist really seems to enhance. Synergising well with the rest of the band – whose psychedelic influence was always apparent – ‘Towers’ has a floating, spacey feel to it. If the listener isn’t paying attention, you’d imagine their mind was on another astral plane. ‘Court of the Matriarch’ follows, masterfully showing Dvne’s ability to create tension and climax. With several different sections, it never stays still for too long, but is the type to predictably become a fan-favourite when concerts return. As the song closes, the vocals really soar over the top to create an incredible, euphoric atmosphere. The buildup to the end is nothing short of mindblowing.

‘Weighing of the Heart’ allows the album to breathe before leading very satisfyingly into the first notes of ‘Omega Severer’, released as a single at the end of last year. There are many elements lurking below the surface – it’s more than just jangly guitar chords and moody vocals at the start – before the first gritty, sludgy riffs really bite. An interlude sees operatic female vocals offer another musical layer behind a tasteful guitar solo (think Dark Side of the Moon) as Dvne build up the volume, drop it down again, and raise it again for a scintillating finish. The first pre-release single, it instantly showed how Dvne have improved since Asheran. Although a fantastic debut, it had its weaknesses, particularly in the vocal department. Yet the cleans, growls, use of harmony and everything in between is much stronger and more confident on Etemen Ænka, which also benefits from more cinematic production that simply sounds bigger and better. It does the music justice in a way where Asheran could sometimes feel a little raw. There is musical evolution from Asheran, too – with more overt nods to trippy, Eastern-inspired psychedelic rock in addition to the new keyboardist to expand the sonic landscape.

‘Adræden’ – another interlude – sets the tone for ‘Sì-XIV’ initially with a soft calmness that builds into tension, resolved euphorically as the powerful opening riff takes over. The chord sequences are simple at a surface level, but intelligent guitar work and tasteful instrumentation gives the music an unmistakeable grandiosity that sets the song out as a real highlight of what is already an incredibly strong album. An change in pace midway through sees the song twist and turn into spacey, psychedelic weirdness before yet another thrilling climax. It becomes a signature stylistic for Dvne to build up and crescendo into potent, satisfying climaxes, but each dynamic change is so well-executed across Etemen Ænka that it is a stretch to say that this feels formulaic for them. It would be more accurate to say that these peaks and valleys breathe life into the record, as if it walks, talks and has mood swings just like we do on a daily basis.

‘Mleccha’, another slow burner, has two minutes of quiet before exploding into more progressive metal mastery. A rollercoaster of a track, it is a journey of its own to the point where you can hear yourself catch your breath as it ends and ‘Asphodel’ offers another interval in the track listing. Led by a soothing female vocal, it crescendos gradually to paint the background for epic album outro ‘Satuya’. At eleven minutes long, easy listening maybe isn’t the word. Anything less than a song like this wouldn’t really be appropriate to round proceedings here to a close, though. Another slow buildup leads into emotional, ‘epic’ territory that sounds as if it could be performed by a full orchestra. It’s certainly a long piece of music, and some listeners may lose attention towards the latter end of Etemen Ænka – clocking in at 67 minutes in total – but for those who are prepared to take that ride with Dvne, it’s an intensely rewarding way to round off this monster of an album, meticulously structured throughout.

Etemen Ænka is a journey, nothing less. Fans of anything sludgy, proggy, trippy and spacey will be at home here. I was not expecting an album to blow Asheran out of the water like this. Maybe this won’t be for everyone – it’s a long album, and the type to reward its listeners more and more with each repeated spin. It’s not instant, and perhaps the riffing or vocal styles won’t appeal to all types of rock or metal fan. I hate to say this, but for me, I find there’s hardly anything I can criticise about Etemen Ænka. This is just what I was hoping for from this band, and then some. A thrilling progressive masterpiece, the sky’s the limit for Dvne.