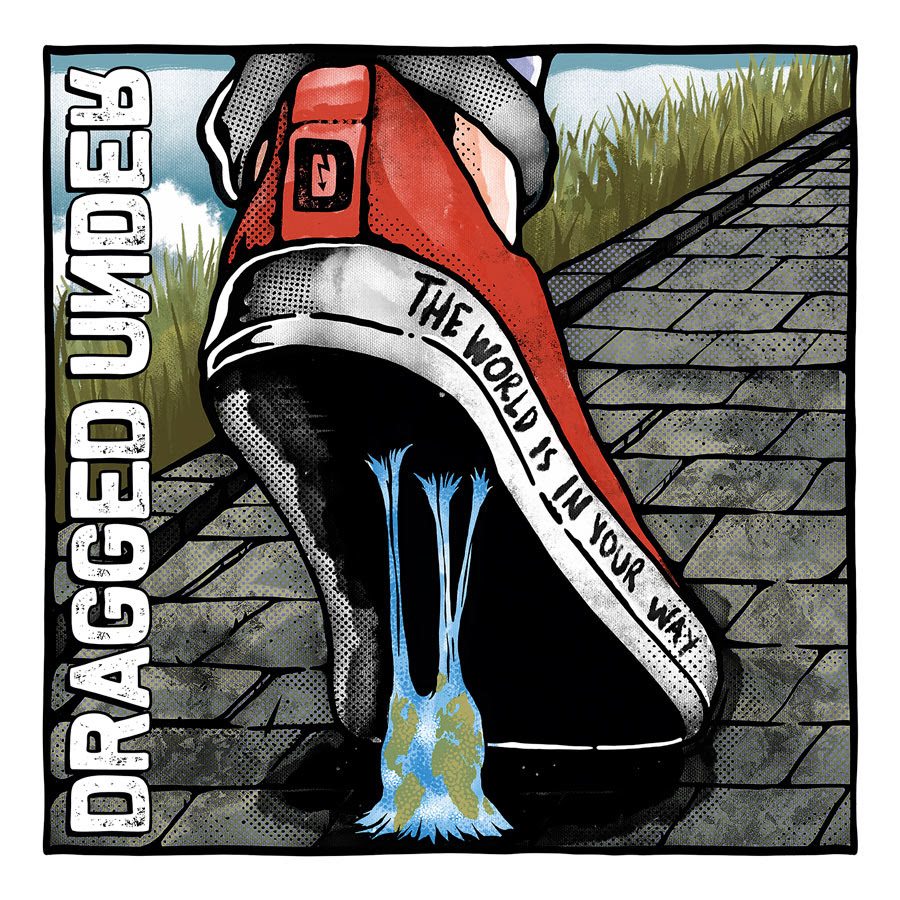 For those of you familiar with youtube metal legends like Jared Dines, Ryan “Fluff” Bruce, or Austin Dickey, you may well have been aware of a band called Rest, Repose. This is not a Rest, Repose album review. It is, however, the deluxe reissue of the debut album of Dragged Under. The band that Rest, Repose formed into when they parted ways.

Remaining, are vocalist Anthony Capocchi, and Guitarists Josh Wildhorn & Fluff, alongside newcomers Hans Hessburg and Kalen Anderson on bass and drums respectively.
So here we have The World Is In Your Way. A powerful and energetic album mixing pop punk and melodic hardcore together. Dirty basslines and aggressive riffs join up with exciting choruses that are nothing short of anthemic, that you can already see pumping up a crowd at any show.

The result is a sound that isn’t dissimilar to that of the already well established Beartooth. Just with a tiny bit more speed and intensity.
A well received album to begin with, The World Is In Your Way is only improved by the release of 2 new songs.
While older tracks like The Real You, Chelsea, and Here For War inject pop-punky choruses in between hardcore verses, Feel It goes all out. Building it into every aspect of the song. Slightly more melancholy than other songs on the album, Capocchis softer vocals, and the slightly more stripped back sound that crops up throughout ensure the song still manages to stand out as one of the best tracks on there.

The other new addition, Just Like Me, doesn’t slack either, possibly one of the most fun songs on the album in general, it returns to the more punk/hardcore sound that Dragged Under have been perfecting. Similar to Covered In Sin, gritty basslines really drive the song along where the bridge comes into effect, keeping the song feeling fresh and exciting each and every listen.

I haven’t mentioned much about the older songs as they’ve been out for a while already, however it just wouldn’t be fair to not say that each and every song on the album is truly awesome to listen to. Each song is excitingly different, but maintains a distinct sound that’s evidently Dragged Under. The influence of bands like Stray From The Path and Beartooth are also evident, in songs Roots and The Hardest Drug. On top of this, light use of electronic instrumentation throughout the album make for some great effects that pull it away from being very standard in its tone as a melodic hardcore album.

Brilliant, effortless vocals, furious guitar playing, and relentless drums and bass really make for an exciting listen on The World Is In Your Way. The 2 new tracks fit seamlessly with the rest, and just add to an already great release full of catchy and memorable songs that are guaranteed to all be crowd pleasers at any show.

Additional note: Since its release they have also added the Christmas track This Holiday, which is as enjoyable as the rest of the album. Lyrics that tell Rudolph to “Fuck Off” add just a tiny bit of humour in to round off the album wonderfully.