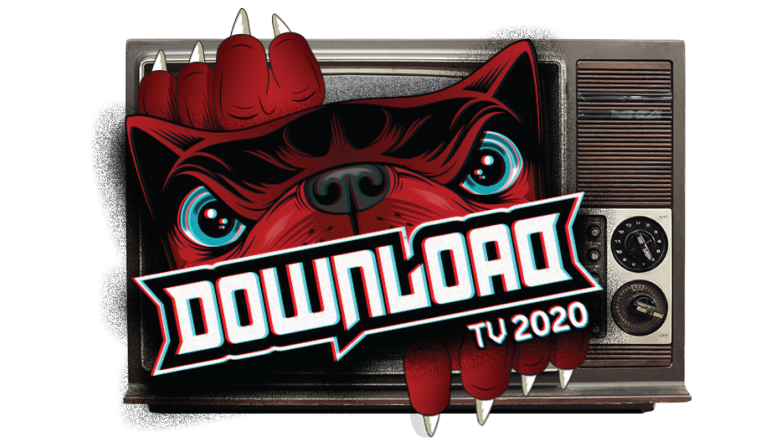 The mud seemed to really beckon me this year, but alas Download weekend was spent in the lonely comfort of my own bedroom and back garden, which did make for quite the memorable time nonetheless. I set up a bit of signage around my “Main Arena” of a garden, and cracked open a few ciders, while nestling into my camping chair. Heck, there was even a dash of rain on its way, but that wasn’t going to stop my metal spirits remain high and mighty. Download TV seemed to come around so quickly, and the added fundraising for NHS Charities was a heartwarming touch.

Friday
The first day of entertainment was actually a big surprise for me, as I wasn’t sure what to expect. Even a full-on interview with Mr Copping himself hadn’t completed the puzzle in my head, and so I waited for the countdown to begin and got relatively comfy. There were no Ostrich Burgers or fry-up tents in sight, so I stuck a Kiev on and hoped it’d fulfil my meaty desires.

Friday’s biggest wow-factor, for me, was the cameos. Never in my life did I expect the likes of Supervet’s Noel Fitzpatrick to bless my screen, and talk about his experience with Evanescence and rock n’ roll. The NXT footage was also really great, as the Download Dog joined in some of the training. It was fun, lighthearted and a significant part of the day in reminding me what Download is – a family.
The distanced footage of Steel Panther covering KISS was also a great addition, only adding to the liveliness of the event.
Come evening time, and the main lights dimming to just the edgy lamp in the corner of my room, I wonder what sort of order the music would appear. I was a little confused to see some KISS footage early on but perhaps that was a taster to excite me for their finishing act.

Amongst the music were interviews with a number of bands, which was a great way to break up the evening. It was really entertaining to listen to Airborne talk about their ban on climbing, and Chris Motionless’ love for wind instruments. But I felt that some of the questions asked were very demonstrative of a lack of knowledge of the bands, or could have been answered by a quick Google search. As fans of these bands would have known a lot of this information already, it would have been nice to use this time to focus more on the future and less on the lock-down.

Saturday
Day two rolled around pretty quickly, and I’d still failed to locate a Yorkshire Pudding. But I was able to make up for it with some DLTV fun. There was a bit of stand-up comedy, some guitar lessons, and a nice bit of Trivia, which got me through the early afternoon. Again, it was another reminder of how much of a community we have, and how many different options you have as a festival goer. Whether it’s in the Dog House or in the cinema, you’ll find yourself lost for a few hours doing something fun with your friends/family.

Official program in hand, I watched as my laptop screen counted down from two minutes until it was finally 7pm. It was nice to see some of Poppy’s new content, and go through another load of dispersed interviews. But again, the questions felt very lack lustre and didn’t focus on information that would have been eye-opening to me, as a fan.
The hour-long Iron Maiden footage was a great finale to the second day of DLTV, and it really brought back some memories of my early Download days. I’m glad that the headliners of this year stayed for the online event and it was great having the chance to catch one-off content, and to also shed light onto other members of the music industry.

Sunday
Our final day kicked off rather early, at 4:25pm GMT. Starting us off was System of a Down, and the interview Download had with Shavo and John 15 years ago. For any SOAD fan this was a great piece of content to see, because here they are all these years later sharing the headline spot with Iron Maiden and KISS.
Following this we had a 2016 performance from BABYMETAL, playing their song “Karate”. Whether you’re a huge fan of these guys or not, I think they bring a level of energy with them to their live shows. Through all that rain was a community through and through. The Darkness was another great addition to the music, pumping their hit song “I Believe In a Thing Called Love”.
The socially-distanced performance from Baroness was outstanding, and made me miss live music the most. I do have to take a moment to mention the interview with Steph Van Spronsen, who is an Artist Booker for Download Festival and Live Nation. I thought this was a great bit of content to have, as I often feel that the driving force behind a lot of the music industry is forgotten about, so to have some of the integral team members of various radio stations, magazines and, of course, Download itself was extra special.
Other honourable mentions of the evening were Korn, Skillet, Disturbed and Powerwolf.
One of my favourite parts of Sunday’s evening content was seeing Bowling For Soup. They’ve always been a fun band, and showing their 2011 and 2014 performances was a nice addition to the evening.

Finally we have the exquisite closure of System of a Down. We start with 2005’s performance of “Mr. Jack”, which is followed by an interview with John. Some better questions top this snippet off, as John explains a little more about what 2005 was for the band. Two number one albums in one year, plus their first time headlining Download, meant it was quite an extraordinary time for them. John compares this point for the band to now, where he states “we weren’t acting like the buffoons we’ve turned into in the last fifteen years, incapable of working together for some reason.” It’s no secret that the band have been on-and-off in recent years, but an honest comment goes further than a sugar-coated version.
We jump back to some live footage of 2011, where the band are playing “Kill Rock N Roll”. The dark stage eases you into reminiscing thoughts and, with one last stretch to go, the sinking feeling of Download coming to an end is still hard to bare.

Summary
If you’ve managed to stay for this long then perhaps you’d have come to your own conclusion regarding Download TV, but for me it was a roaring success. The mini interviews throughout the evening music were a nice touch that made the whole vibe feel a lot more personal, and there was a great selection of artists. The only real downside for me was that the questions weren’t very bespoke, and I think these opportunities for exclusive unrepeated content should have been paired with some more in-depth questioning.

Each day had a wide variety of bands, and the little snippets of classes during the afternoons made everything so fitting for a variety of people. I also enjoyed that some performances were acoustic or played as part of a distanced Zoom call because it added something to it that was much more raw, and exclusive-feeling. It was also great getting to hear from people who work in the industry, and their Download memories, as this is something you don’t hear about nearly as much.
There were a few technical glitches throughout the weekend, but it was handled really well and any affected content was reposted.

We look forward to seeing you all back at Download in 2021. Tickets are on sale now! Get yours here.