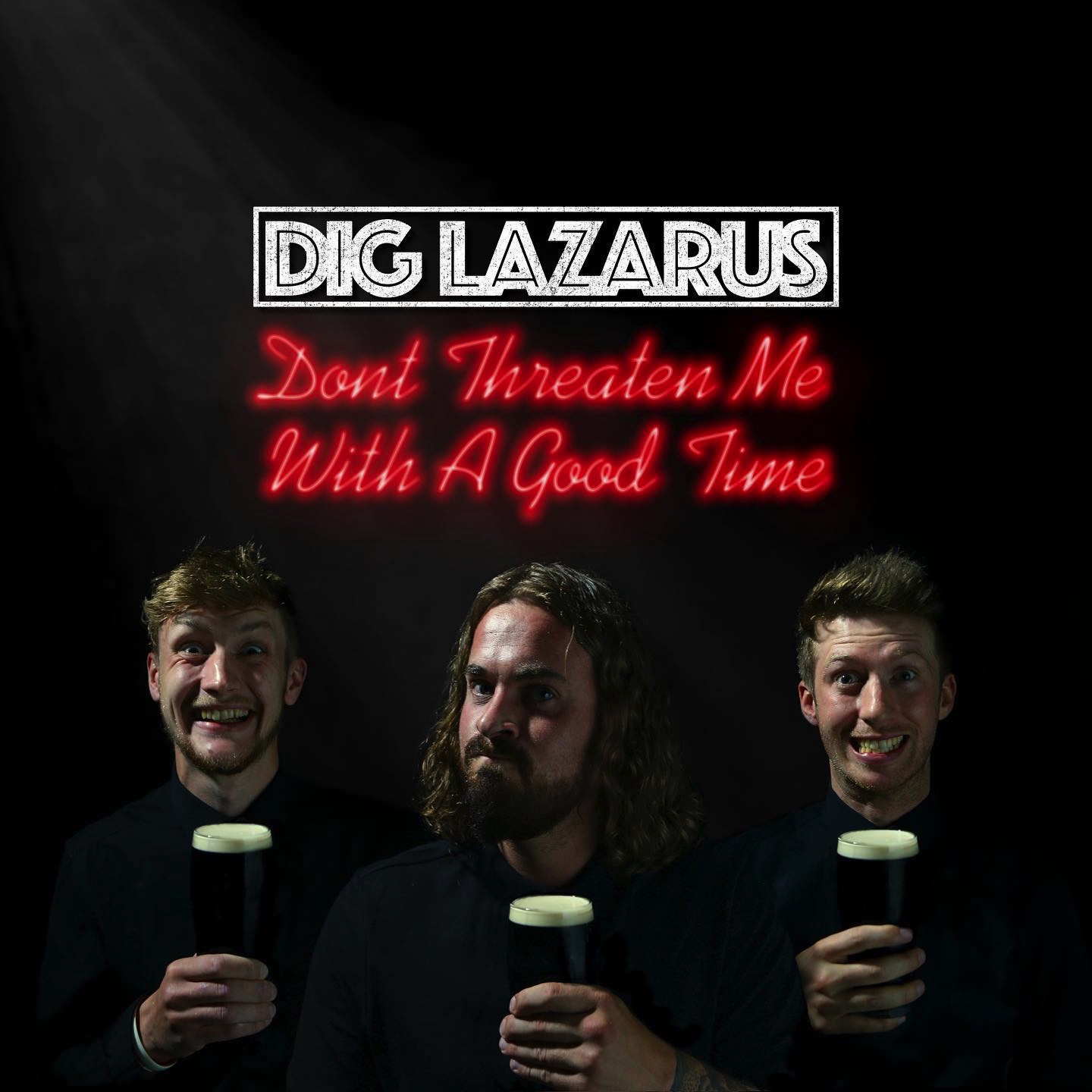 After finishing a tour with ‘The Virginmarys’ last week, we are now also able to get our hands on the long awaited debut album from Dig Lazarus. Thirteen tracks with a couple of surprise celebrity guests and it’s a culmination of the best songs, that the lads have penned over the last 10 years. A few will be instantly recognisable if you have been following this loveable trio, as they manage to write immensely catchy and ear sticking music.

Preaching from a rock pulpit, Jesse Hughes ( Eagles Of Death Metal ) delivers ‘Sermon’ to ensure we are fully aware of what lies ahead. It’s a brief introduction that leads into ‘Roadrunner’ which runs wild and untamed with an uptempo riff and lush vocals from Ash Tustain. ‘Never Change’ has another pulsating riff and keeps the momentum going with a humble and desolate attitude. ’Tell Me Why’ is a fan favourite already, a step up into a solid, punch drunk rhythm and a carefree chorus that Dig Lazarus can manipulate so smoothly. The next offering ‘Satisfied’ has a sleazy type of presentation with a gorgeous hook on the six string. I love the tone on that and how it lingers like a smouldering fuse at the end, before the explosive entrance of ‘Dexter’ a simple punk, trash all over the place, noise. Yes, ’Dexter’ is a handsome beast, uncontrollable and full of ‘get it off your chest’ lyrics. Hard to believe it was one of the first songs the guys wrote.

The eponymous song, ‘DTMWAGT’ steadies the ride a little and crushes any remorse. Fuller in sound and more emphasis on the vocals, it carries well and at this point it’s worth praising Dave Draper on his production, as the album is so well put together. I like the way the tracks blend into each other, something you would often get on vinyl, back in the day. ‘Feel’ has ample melody and cruises along with a glorious harsh beat, hitting the walls on all sides and again the final bars drop into the mire bringing it to a stupendous finale. The brilliant ‘Joker’ has to be one of the best from Dig Lazarus, one of those that you remember from the first few chords, as once heard it’s ingrained in your soul. Off centre and in true DL fashion it is a relentless stomp and has that underlying epic layer. Nicely hit skins from Jack Cotterill that feature even more on ‘Keep It Clean’ which has a more classic rolling rock vibe, a bit like Quo in parts if you can believe it. ’Sky Tonight’ wanders with a more even pace and picks up the clean bass tones from Atticus Hall-McNair, I like the sense of pleasantness it rings out and the subtle but interesting way it’s constructed. That can’t be said for ‘Outlaw’ with its demonic and grinding guitar. The vocals linger and grasp the last strands on each line, then there is a middle section that has the most delectable chilling sound. As it leaves the room ‘Outlaw’ slams the door in your face, such attitude is hard to follow, but ‘Time Froze’ continues the flow, lending a hand on this one is Ally Dickaty from The Virginmarys, after the gentle introduction with loads of blinding chords, it starts to whirl and the wheels get into a spin. A pretty decent tune and credit to the band for their ability to incorporate such a spellbinding piece of work.

So not only are Dig Lazarus one of the most enjoyable bands to watch live, they are now also one of the best to hear on record. This debut is a mix of writings past and present and cover quite a few years, but with Mr Draper on board they have managed to keep the continuum so this album pours out incredibly evenly. There are messages in the lyrics that signify personal experiences and of course that helps with the innovation, that you get from this Nuneaton based band. ‘Don’t Threaten Me With A Good Time’, I found easy on the ear but with enough rawness, to make it really enjoyable.

‘this album pours out incredibly evenly’

Highlights –  Tell Me Why, Joker, Outlaw