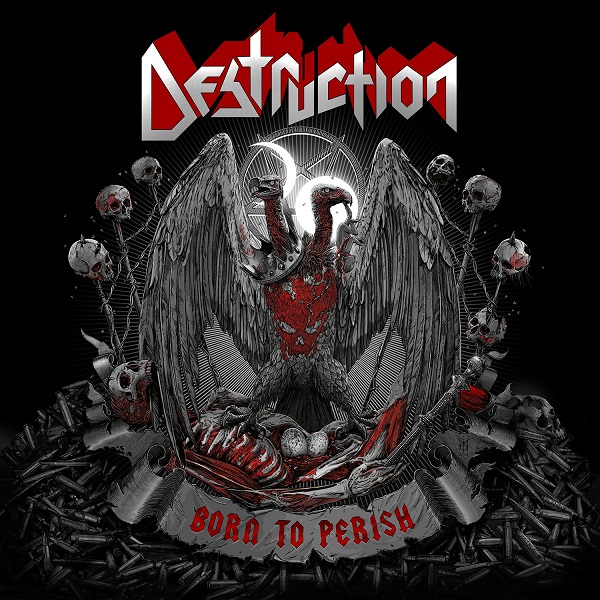 For a lot of veteran metal bands, there seems to come a time when they start to curb their experimental instincts and settle into a safer groove, where their creative output mainly stays within boundaries that won’t bring an unwelcome uproar from their fans. Whilst this may be cause for criticism, many of these artists have long paid their dues and earned the right to keep the wheel spinning, quenching the thirst of both themselves and their fan base. Today’s subjects find themselves in this position, having weathered the storm of the disastrous ‘neo-Destruction era’ of the mid to late ‘90s to begin anew in the 21st century. With eight full lengths and two reworkings under their belt since 2000’s All Hell Breaks Loose, the German outfit continue their thrashing surge with Born to Perish.

The third wheel of the Teutonic thrash triptych (and often out done by beer guzzling compatriots Tankard as well), Destruction have nevertheless held their own and delivered under the stewardship of mainstay six stringer Mike Sifringer and indelible frontman Marcel ‘Schmier’ Schirmer. Despite Born to Perish seeing the introduction of two new members, there’s no beats skipped as the group blitz through the album’s eleven tracks with razor sharp focus and determination. It helps that the recent recruits are rich in experience. Drummer Randy Black has Annihilator and Primal Fear (amongst others) on his resumé, whilst Damir Eskić has been the lead player for Swiss metallers Gomorra in their various iterations for 25 years. Black plays with a sense of purpose; his drive helping to elevate sections that are otherwise lacking, whilst Eskic trades scorching fret work with Sifringer in a fashion that belies the brief duration of their partnership. As far as line ups go, this one could prove to be very fruitful indeed.

The injection of energy the new faces bring does give help provide a spark to some otherwise pedestrian music. That’s not to say there’s nothing of value on the record, but any lacklustre material is given a lease of life by the sheer tenacity of the performers to make it work. There’s nothing particularly special about the punchy riffing on the title track, the loose, punky verve of “Filthy Wealth” or the thunderous bounce of “Rotten” for example, but you can’t help but be gripped as they rip their way through your ear drums. That said, Destruction wouldn’t have made it this far without having a few crackers per album. “Inspired by Death” and “We Breed Evil” have an irresistible, intrinsic melodicism that make them two of the most memorable cuts, whilst the brutal, calculated bone cruncher “Ratcatcher” is a satisfying conclusion to the record. Album centrepiece “Butchered for Life” is a welcome change of pace as it builds with an inevitable sense of foreboding, where acoustic plucks gradually make way for cutting riffs that tear through the tranquillity. You can tell Destruction were going for something ‘epic’ with this, and whilst they don’t quite pull it off, it’s still an admirable effort.

As previously stated, there is a reason Destruction are still knocking around. With thrash, I tend to believe that the cream rose to the top, and the bands that were prominent in the scene at its peak and that still endure to this day are the ones that were the best. Destruction can count themselves within that group, and although it’s not the greatest record you’ll hear from them, Born to Perish still has everything you’d want from them at this point in their career.

Born to Perish is available on August 9th via Nuclear Blast Records, and can be purchased here.