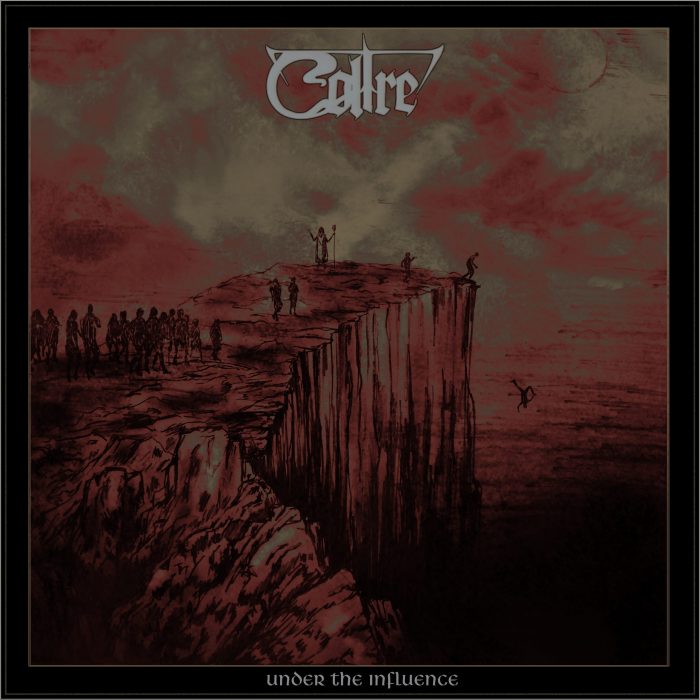 At just over a year old, three-piece Coltre formed in London in May 2019 with a determination to resurrect the classic aesthetic of the NWOBHM. Their first EP Under the Influence has certainly achieved this mission, under the wide canvas of atmosphere, ominous melodies and splashes of fantasy. The reissue by Dying Victims Productions on the 31st of July is set to enhance these features further by the inclusion of previously unreleased track Fight – a song which could easily dwell within Iron Maiden’s lost archives.

Opener Lambs to the Slaughter is an epic listen. With the rousing lead melody accompanied by a marching drum beat, there’s a victorious and proud feeling at the heart of the track. This transfers into a gloriously faster guitar riff and a pounding bass line. Soon the listener is propelled into the chorus and the elongated vocal lines of “You flock like sheep, like lambs to the slaughter.” Accompanied with the proud guitar melodies, this message of anti-conformity is realised and increased in believability for the listener. At seven and a half minutes long, there’s plenty of room for Coltre to experiment and reveal different elements of their sound, whether its through faster guitar rhythms and new harmonising melodies or lower almost menacing vocals from Marco Stamigna.

Crimson Killer attacks the listeners ears with a retro blood curdling screech and a guitar tone that teleports you to the denim clad streets of 1979. What’s immediately obvious (and remains so throughout the EP) is the sheer catchiness of the guitar and vocal melodies. These are not melodies that instantly fizzle out and leave a pathetic pile of ash in your brain. One listen is enough for those riffs and verses to weave into your mind and remain dancing there when the track has finished. Lead vocalist Marco Stamigna has a voice that combines the wailing tones of Diamond Head’s Sean Harris, a dash of King Diamond and a mere sprinkling of the spirit and snarl of an early James Hetfield.  It’s a voice that engages and adds to the vintage worship of the EP.

The reissued exclusive track of Fight is a fantastic addition, opening with beautiful duelling guitar melodies that have a distinct ancient Egyptian flair. The lyrical content deals with telling the listener to never surrender and “break through the chains”, a classic heavy metal topic. There’s a brilliant solo layered with a Kirk Hammett approved dose of wah pedal that blends perfectly into those guitar melodies that simply melt into your ears.

The definite highlight of the EP, Plague Doctor stands just shy of the ten-minute mark and is simply brilliant. The heaviest track of the album, Coltre begin to fully dabble into early thrash territory with the speeding and chugging of the introductory palm muted riff. Stamigna fully completes his transition into Sean Harris within the verses as there’s such strong Am I Evil? vibes. Around the four-minute mark, there’s a completely unexpected bluesy southern rock melody complete with a jaunty Deep Purple style organ. Its amazingly refreshing and more importantly fits perfectly. It reminds me of how Cliff Burton brought different influences to Metallica’s early material whether it was through classical compositions or Lynyrd Skynyrd. Plague Doctor is full of amazing solos and fast rhythms with foreboding perspectives from the eyes of the plague doctor. It’s a journey filled to the brim with heavy metal attitude and darker tones.

However, Coltre reach full musical indulgence through instrumental track On the Edge of the Abyss. The nods to Maiden here are a plenty, whether its with the Steve Harris style bass at the beginning or the charging guitar rhythms. There is a wealth of atmosphere and differing tones within this one instrumental journey and I particularly enjoy the slow wailing guitar solos that cry with tragedy and a drama similar to that of Metallica’s Fade to Black. There’s a plethora of impressive solos for just about any mood you may feel whilst the one reoccurring riff is brilliantly memorable. Overall, it’s a fantastic instrumental that demonstrates the musical talent and tightness of the three piece.

Under the Influence is an EP that not only combines the influencer of the NWOBHM but also the influenced genre of Thrash. Coltre are not mere carbon copies of the greats like Iron Maiden, Diamond Head and Mercyful Fate but instead they pay homage to metals most exciting period whilst adding their own skilful flair. For an EP, it’s a full journey into the abilities and styles of Coltre, beginning with the classic NWOBHM Crimson Killer, erupting with the thrashing fully charging beast that is Plague Doctor or exploring instrumental indulgence in On the Edge of the Abyss.

It’s an incredibly promising first effort and I’m excited to see how Coltre evolve in the future.

Highlights: Plague Doctor and Lambs to the Slaughter

Coltre are a part of Dying Victims Productions.