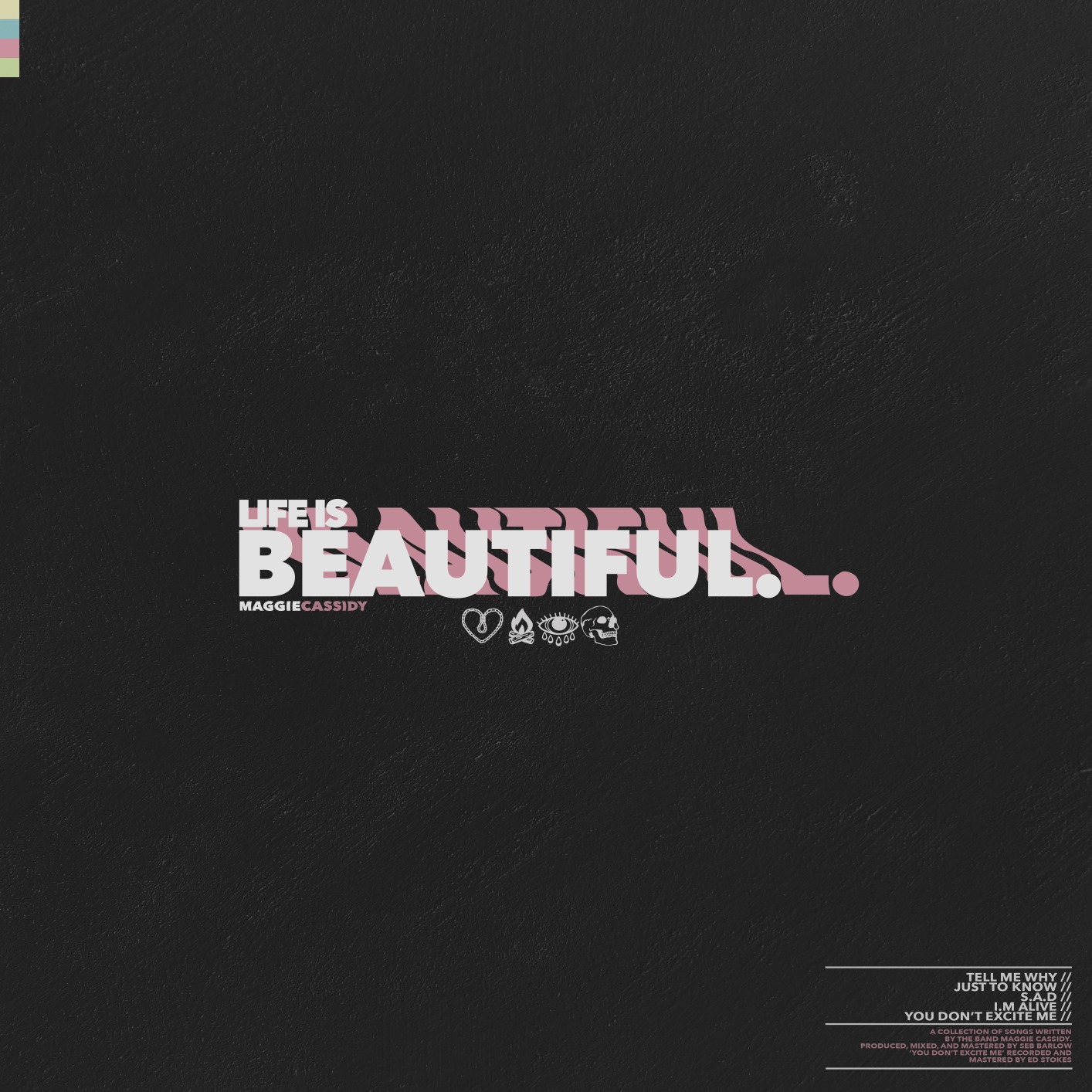 Effervescent and energetic rock band Maggie Cassidy release their debut EP Life is Beautiful today. This band is explosively socially relevant, and they address contemporary issues, such as mental health, in their lyrics. From Guildford, Surrey and formed in 2018, their music joins boyband pop with British rock. Their sound is fresh and exciting, and their self-released EP is well worth a listen.

Opening track ‘Tell Me Why’ is as energetic and urgent as all debuts should be. It introduces the EP on a heavy foot but Jamie Coupe’s voice reveals the band’s pop side. But I quite like this contrast, and perhaps for rock-lovers who aren’t too fond of the screamo but love their guitars heavy, then this is the band to listen to.

Next up is ‘Just to Know’, which is my favourite track on the EP. The lyrics question whether or not it’s worth being impulsive just to know the way it feels. It has an irresistibly catchy chorus and a rhythmic groove that makes it a sad song you can dance to. For me, this track sticks out compared to the other four because of its reliance on the urgent rhythms played on the guitars, bass, drums and even in Coupe’s voice.

‘S.A.D’ becomes especially relevant given the current state of the world, and even more so when paired with its music video, which involves the band performing over video chat. The song’s lyrics talk about the mental effects of depression, “the SAD is killing me”, and are expressed in a very frank way. Again, it’s a sad song you can dance to.

‘I’m Alive’ poses an interesting question, “Am I growing up or wasting away?”. The song battles with maturity and the effect it has on mental health. The next track ‘You Don’t Excite Me’, the acoustic conclusion to the EP, also talks about maturity. It is emotionally vulnerable just like the four other tracks, but in a slightly different way as it also deals with love and personal evolution. In this track, you can really hear the emotion in Coupe’s voice.

Life is Beautiful is a lyrically pessimistic yet musically optimistic creation. It is relentless guitar rock with a pop-charged sharpness and socially energised backbone. Overall, I like the EP’s energy and sound, and the fact that the band deals so heavily with mental health issues, normalising them even, is excellent.

Highlights: “Just to Know” and “You Don’t Excite Me”

Life is Beautiful is out now and can be purchased here.