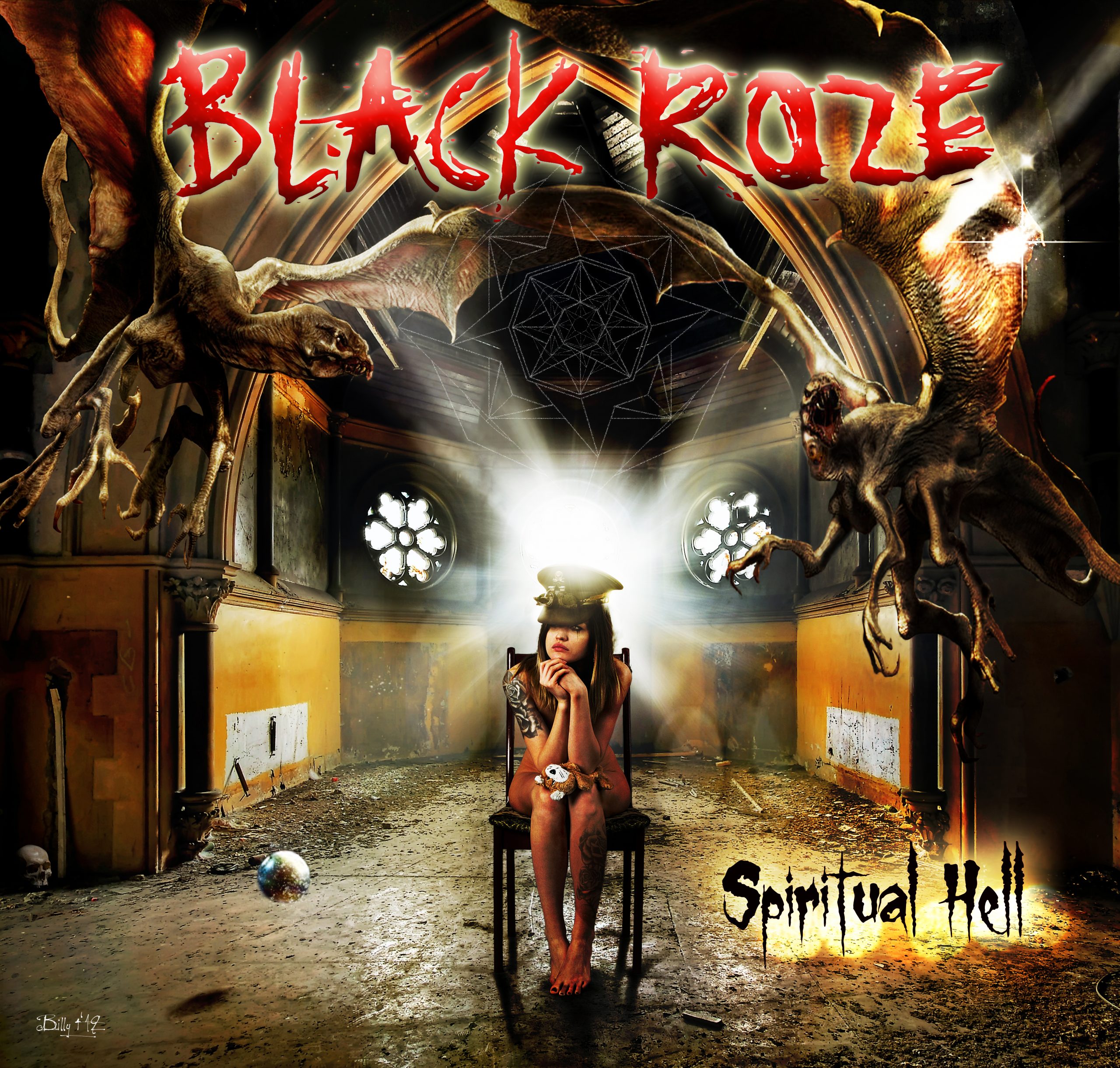 Kent-based rock band Black Roze encapsulate lots of different styles of rock music, including goth and sleaze, into their style, which they describe as “Emotionally charged Feisty Rock N Roll”. The band started as a covers band but have been writing their own material for a few years now and in that time they have celebrated the release of an EP called ‘Pleasure & Pain’ and their debut album, ‘Spiritual Hell’. I’ve had the pleasure of seeing the band twice, both at HRH Sleaze here in Sheffield, and I loved their energy. Let me now delve through their debut album and let you know my verdict…

The driving beat of opening track, ‘Obscenity’, underpins a raspy, breathless vocal but the beat is the star of this show as the rhythmic pounding of the drums hooks you in. ‘Godz N Queenz’ is another storming beat and so sleazy it is in fact filthy and fun. Muted verses turn to a shouty chorus and the pace is kept fierce by sizzling guitars and grumbling bass, while ‘Why Don’t You’ is a harder tone.

‘Soul On Fire’ is where the album truly comes alive for me, reminiscent of a 90s film soundtrack in style, it’s sultry and powerful with emotive vocals which make the hairs on my neck stand on end. The compelling vocals pierce the air alongside an atmospheric instrumental. Stunning.

‘Snow White Angel’ is simply adorable, a retro hair metal power ballad duet which highlights the lovely blend of the two vocals, creating an altogether different sound and completely in sync. I dare you to defy this track from its purpose of getting into your brain!

‘In The Darkness (Hell)’ is my track of the album, mysterious and enchanting, dark and yet enjoyable and pleasant. What a voice this lady has. The style is experimental in pushing the boundaries, and in an almost prog style speeds up at 3 minutes. This is a sombre beautifully layered song, the growling backing vocals and gang vocals evocative and poignant, and each listen gives up new nuances and revelations.

‘Curse of the Black Roze’ is a touch too goth for my taste but it does invade your psyche. The drum beat from ‘So Sleazy’ is stuck in my head and I adore the riff which brings the track to life. This is immensely fun and catchy but the kick drum was a little much for my poor head after several vodkas last night…

The groove of ‘Lost’ grabs me but the lyrics are a touch too greeting-card sentimental. And the album closes with a reworking ‘In The Darkness (Spiritual)’ – you could see this as an alternative version but I view it more as either a prequel or a conclusion to the Hell version, depending on my frame of mind at the time. It completes the set for me. What a set of pipes! The vocal is angelic and this track is lightness against the darkness of the previous version.

I thoroughly enjoyed the album, there are some stellar tracks in there and I look forward to what else the future brings Black Roze. Some of the songs were more fascinating than others, and a couple shook my world a little, so in all I would definitely recommend you take a listen. They are a great band live too!

Rating 3.5/5
Standout tracks: Soul On Fire, In The Darkness (Hell), So Sleazy