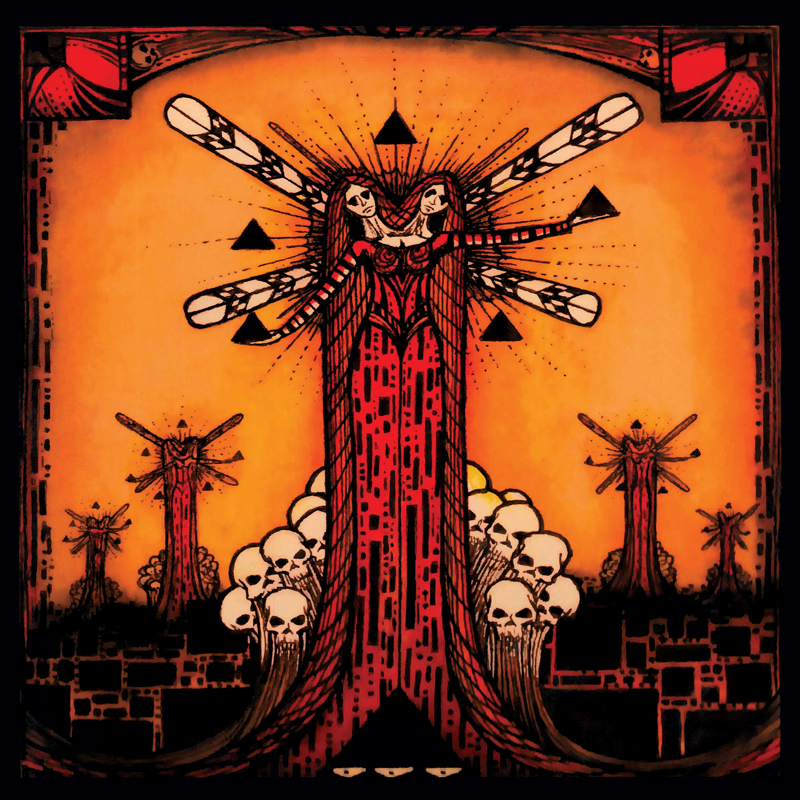 Massachusetts power trio Black Pyramid take a look to their past by reissuing their first LP, long out of print. Their self-titled debut album was first released in 2009 and immediately gained a cult following and widespread recognition for its hard-hitting, psychedelic, progressive take on stoner doom metal, with lyrics about war, the occult and general alienation. Lineup changes ultimately destabilised Black Pyramid, causing a hiatus in 2013, but they reunited a few years later, returning to the live circuit. We haven’t heard that fourth album… yet, but longterm fans will be pleased to hear that they can physically own the album that got the ball rolling. I first heard Black Pyramid myself around three years ago through a Spotify recommendation, and I went straight to this album, hooked immediately on their sound. The decade or so in between this album’s releases hasn’t seen it lose any of its power.

‘…And The Gods Made War’ opens the album with gentle, droning psychedelic strumming before a hugely effective backwards transition sees it segue into ‘Visions of Gehenna’, with a titanic opening riff that evokes stoner doom gods such as Sleep or Electric Wizard. The vocals have an endearing Ozzy-esque quality to them, although are far from derivative, certainly having their own character, attitude and individuality. ‘Visions’ evolves into a fantastic descending guitar riff midway through that dominates the second half of the song, to lead into ‘Mirror Messiah’, one of the album’s true standouts. The guitar work is intelligent and tasteful, the vocals are catchy, and the rhythm section pounds away in the background. ‘Mirror Messiah’ is the first real indication of Black Pyramid’s progressive ambition, with the off-time riffs harking back to Soundgarden, and the different sections, dynamic changes and passages that weave in and out of each other. ‘No Life King’, the shortest ‘proper’ song on the album, has more of a High on Fire-type aggression to it, but with the same Eastern-sounding psychedelia and progressive elements that sound familiar by now. It’s a hugely strong start to the album, before the soft, acoustic ‘Celephais’ allows the album (and listener) to breathe. Think ‘Orchid’ by Black Sabbath.

Black Pyramid launch straight into the truly awesome ‘Twilight Grave’, with some of the catchiest riffing and vocal melodies on the whole album. It’s a headbanger in every sense of the word, and has always been a favourite of mine by the band. ‘Macedonia’ follows, which is the biggest pull factor for any fans or collectors, as it’s a vinyl-only track that wasn’t available at all on the original pressing (although was played live quite regularly back in the day). A swinging, energetic instrumental that melodically and rhythmically pays clear homage to classic metal gods such as Maiden and Priest, you almost forget that there’s no vocals. ‘Macedonia’ is a real treat for Black Pyramid fans who didn’t first discover them in the late 2000s/early 2010s (like myself), and still has a ‘stoner’ vibe to it despite its more straight-up heavy metal stylings. It evolves as it goes along, with plenty of great riffing, and a fantastic, melodic section at the end that utilises cleaner guitars just as well as it does the distorted low end. Worth buying the vinyl for ‘Macedonia’ alone, to all those Black Pyramid fanatics reading.

‘The Worm Ouroboros’ goes straight back into creepy Sabbathy territory again, the music sounding as if it could be textbook, vintage Iommi (even intentionally so at one point). ‘The Cauldron Born’ is a heavy, sprawling psychedelic epic, with more great guitar work and an extended intro that really paints a picture in the listener’s head. At times it particularly evokes the cold, sonic darkness of Holy Mountain-era Sleep. The emotional, defiant ‘Wintermute’ then closes the album with a bang, amid lots of melody and more of Black Pyramid’s progressive leanings. In the name of honest reviewing and criticism, it is worth saying that around the album’s final third the songs’ often-lengthy runtime begins to show. The last three tracks are all longer than seven and a half minutes; sometimes dragging, sometimes outstaying their welcome. It’s not a dip in the quality of the riffage per se, but a sense that what is being played has already been heard before. This style of songwriting will undoubtedly appeal to many listeners and fans of the genre – but there may be others waiting for Black Pyramid to ‘get on with it’.

Black Pyramid’s debut has passed the test of time, unapologetically paying tribute to their influences, creating epic, fuzzy, dark stoner doom to be enjoyed by a new generation of fans. If you hadn’t heard this album before, now’s the time to do so! The ‘unheard’ track is fantastic, and the album – particularly towards the start – is some of the best Sabbath worship out there.