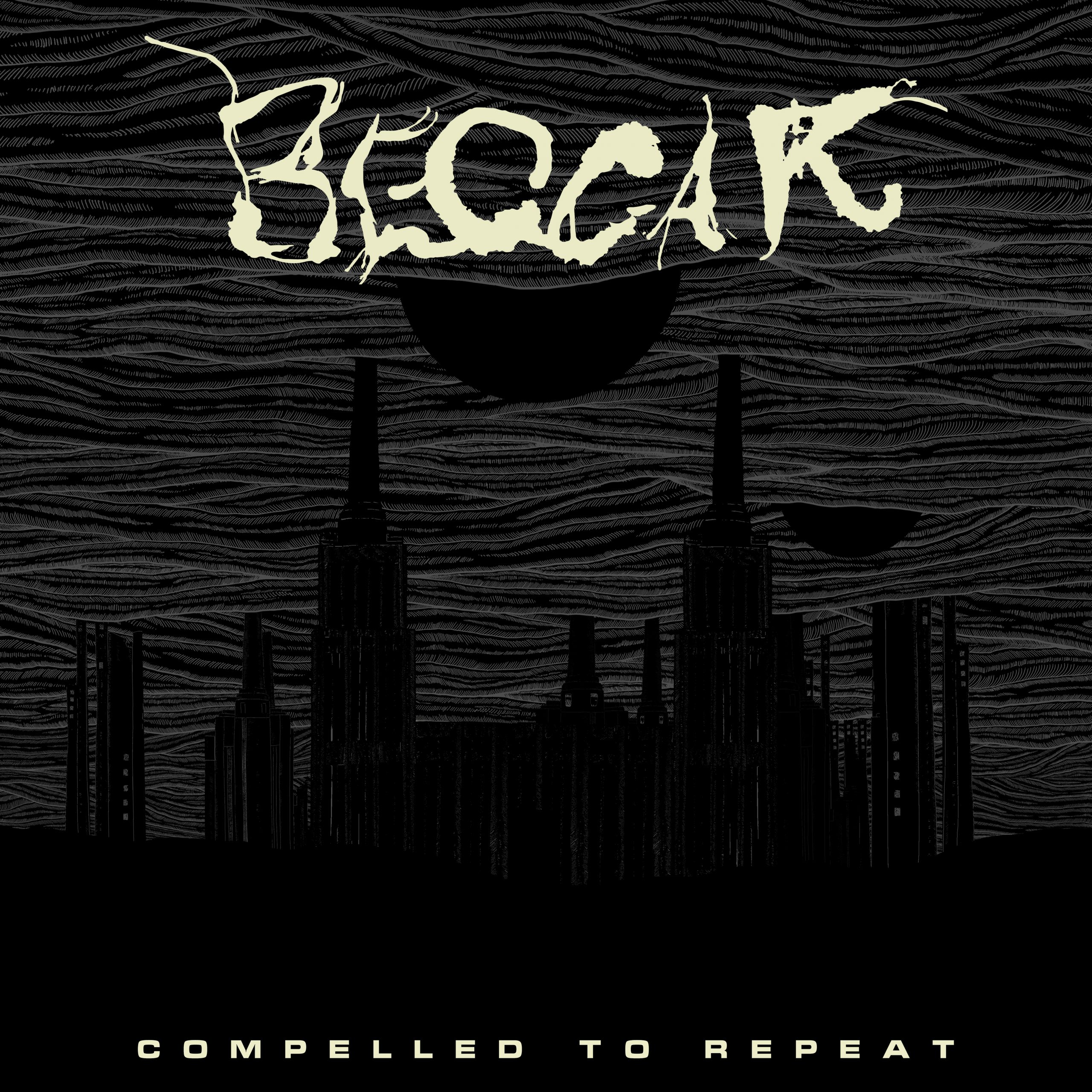 I first heard about London sludge mob Beggar around six weeks ago while in the pub one afternoon with a couple of musicians who were also in the sludge/stoner/doom scene themselves. ‘You don’t know Beggar? You’re missing out, man! Don’t miss them next time they play round here!’ Something like that, they said. The cheap beer I was drinking dulled the exact memories. They were right about Beggar, though. Compelled to Repeat is their first full-length after a string of EPs and a single towards the end of last year. It’s a filthy, colossal album that finds itself towards the extreme pole of the metal spectrum, with a healthy portion of sludge metal mixed in. Unforgivingly dark and abrasive, Compelled to Repeat is bloody brilliant and I certainly hope the lads feel compelled to repeat making music this good.

The album opens with ‘Blood Moon’, starting with some filthy, fuzzy chords, before furious blastbeats take over to make sure that the listener’s paying attention. This is much more intense than most sludge, with hellish vocals to complement it. It drops quickly enough into a more groove-based section that bounces around for a few minutes with subtle, intelligent lead guitar work over the top. Beggar play around with the dynamics, eventually leading into a spacier section with some lovely blues guitar licks thrown over the top. Beggar do well to lead the listener from section to section, making it almost feel progressive without any of the pretension that puts many of the undecided off. They end the song as they started it, bringing it back up to unrelenting extremity. That’s a lot to say already; we’re only four and a half minutes in.

The album is full of further uncompromising brilliance throughout, sprinkled with clever variations. For example, ‘Anaesthete’ and ‘Black Cloud’ are full of New Orleans-style riffage, although songs like ‘Matryoshka Brain’ have chillingly atonal sections that would fittingly soundtrack one’s descent to hell. ‘The Cadaver Speaks’, similiarly, has some of the simplest but most bleakly heavy riffs on the whole album. A lot of their riffs appear simple on the surface, or on a casual listen, but by switching up the structures and atmospheres, Beggar create a really interesting record. Similarly, with the lead guitar work, they vary from bluesier soloing in ‘Black Cloud’ to the entrancing, dissonant solos in ‘The Cadaver Speaks’ or ‘Anaesthete’.

‘Trepanned Head Stares at the Sun’ almost starts off sounding like another band, with its major chords and psychedelic tinges. It’s almost as if Beggar are toying with you, though, as they move the song forward and a bombardment of blastbeats remind you that, yes, this is a very fucking heavy record. This song has the most light and shade, though, as they create a trippy atmosphere alongside some of the most extreme parts of the album, seamlessly weaving in and out of different bumps on the road in the record’s. Beggar aren’t afraid to make the best out of clean-led sections, which is also true in album closer ‘Compelled to Repeat’. They sit nicely as the rest of the band in the background barely let up the nihilistic, grinding filth for a second. This title track finishes the record satisfyingly with a repeating chord sequence that gives it a real ‘epic’ quality.

‘Compelled to Repeat’ is a fantastic listen. The production is great; with a gritty bass tone that suits the mix perfectly, all the instruments nicely audible. If there’s anything to say otherwise about the mix, it’s that the vocals can be quite hard to hear, let alone distinguish any kind of lyrics. With that said, it adds to the depraved atmosphere, giving it a vibe and sensation similar to Electric Wizard’s ‘Dopethrone’, although with a sound that lends more from Eyehategod. Not an album for the faint-hearted, Compelled to Repeat’s desolation is constant throughout, but for fans of the genre, there’s plenty going on to keep them interesting. A very strong effort.

‘Compelled to Repeat’ is out on APF Records on April 3