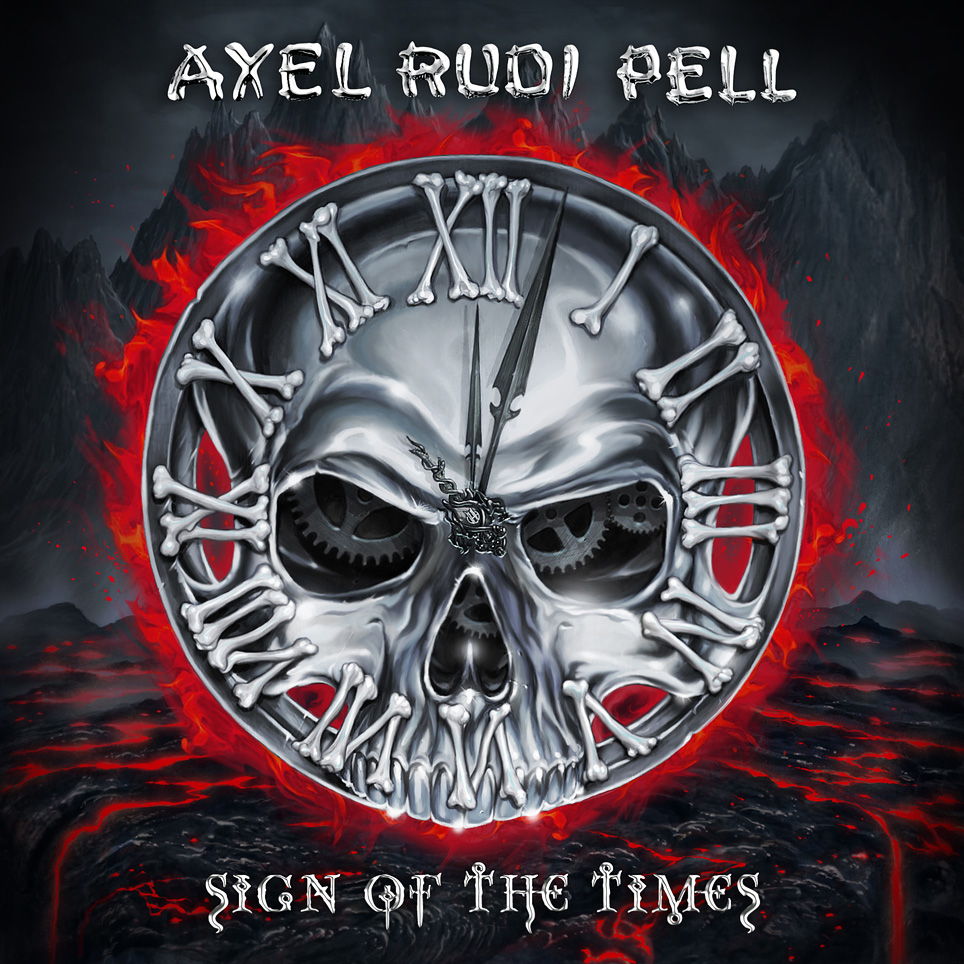 After leaving the band Steeler in 1988, the solo career of Axel Rudi Pell was soon launched with gusto. Since then he has produced an album nearly every year, this is his 18th studio album in 31 years and sales on vinyl alone are well over 1.7 million worldwide. With the latest ‘Sign Of The Times’ a follow up to the 2018 ‘Knights Call’, he is again joined by eminent musicians. A regular on Drums is Bobby Rondinelli who has played with The Scorpions, Black Sabbath, Rainbow, Doro and Aerosmith, to name just a few. On Hammond organ is Ferdy Doernberg, who has also been seen with Rough Silk and Uli Jon Roth, while bass guitar is handled as ever by Volker Krawczak of Steeler and The Dune fame. Finally Johnny Gioeli of Hardline joins as vocalist. Such a profusion of talent can only mean a wealth of perfectly executed songs.

Kicking off with a haunting and mystic sound, like the chanting of dead souls, the band have your attention straight away. We are then taken to the shredding of Pell and the forceful vocals of Gioeli. This warm up of 1.40 minutes leads nicely into ‘Gunfire’ a hard and determined song, with rapid guitar, not unlike a hail of bullets, that the title describes. ‘Bad Reputation’ is a classy melodic number, quite commercial as it sweeps along with smooth guitar and singalong lyrics. The title track ‘Sign Of The Times’ is another with a haunting introduction, you feel like you’re in a medieval cloister somewhere. It has a massive riff, as the song progresses, the rising vocals and clean guitar continue to pound away. There’s a virtuoso solo from Pell and you can’t escape the drum bombardment from Rondinelli. After that dramatic number, ‘The End Of The Line’ is a lot more upbeat, a racy, rock solid one with a steady tempo and a chance for Gioeli to produce even more hard driven vocals.

The album takes a relaxing turn as we reach ‘As Blind As A Fool Can Be’ a true ballad, powerful and steadfast. The guitar wails with weeping chords and yet again the vocals are phenomenal, reaching levels without loosing any strength. ’Wings Of A Storm’ is an exceptional song, even from the initial few seconds, it hits you like a heavyweights punch, with clashing drums and the bass of Volker Krawczak. Another blistering solo from Axel is accompanied by flowing vocals and the Hammond keys of Ferdy Doernberg. In fact after listening to this and ‘Waiting For Your Call’ it’s pretty evident how good Gioeli is, up there with Coverdale and dare I say Dio, the frontman is considerably underrated among other singers of his ilk.

‘Living In A Dream’ tip toes into motion with a warm Reggae beat, a gentle lapping of waves, with plenty of soothing lyrics and soft guitar. Then after the first minute or so it turns into a more heavy melodic rock song. A great hook travels the length of the track, giving it more edge and it’s one you can easily join in with, be it vocals or air guitar! Tenth and final offering is ‘Into The Fire’ pulsating with disturbing off centre chords, which I love. It descends into the burning flames with clear lines and boldness, a steady slow rhythm, with guitar work having an almost Far Eastern approach, the six minutes end in a crescendo of intense appeal.

I am completely awe struck at the sheer weight of power and the faultless results on ‘Sign Of The Times’. As ever Axel Rudi Pell, who celebrates his 60th birthday in June, has delivered and the merchandise consists of every format you can wish for. The limited box set even includes a clock incorporating the stunning cover artwork. Of course there is a tour planned for October, November 2020 and even a part two in April and May 2021, although sadly I can’t see any UK dates as yet.

Pell – “There are a few of the love/hate relationship songs, but most of the lyrics deal with the situation our planet is in right now, that’s why the clock on the cover shows two minutes AFTER midnight. We live in a very dangerous environment in terms of climate change, religious wars and public safety.”

Out on the Steamhammer label – on May 8th, you can order a copy via the links below.

HIGHLIGHTS – Sign of The Times, Wings Of A Storm, Into The Fire.