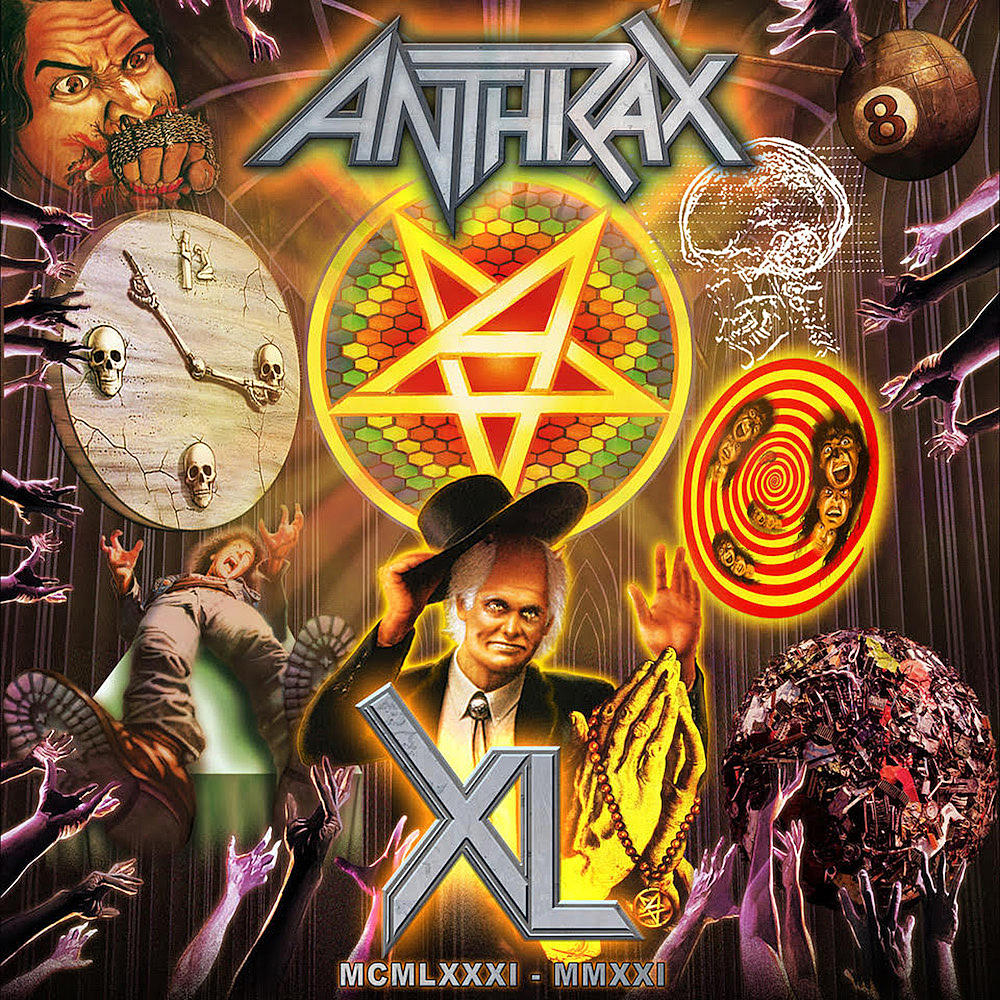 At the forefront of thrash metal for over forty years now, Anthrax celebrate yet another decade of dominance with the release of XL, live-streamed a year ago, when the world’s doors were a little less open than they are now. Shot at the Los Angeles-based studio The Den, it’s a two-hour set of well-known hits and deeper cuts from their extensive back catalogue – at least from the Belladonna years – though the energy in this live album is so powerful, you’d think they were playing to a sea of adoring faces.

“Even though we were performing in a studio with just the crew there, we played that set like we were in front of 50,000 screaming fans,” says lead vocalist Joey Belladonna. “I felt like we made a full-on connection with everyone watching from their homes or wherever, and that they connected with us. It was quite an intense experience.”

At age 60, Joey is on outstanding form over XL. There are plenty of metal and heavy rock bands from Anthrax’s era with frontmen who, for all the charisma they had in their heyday, seem to have lost their mojo a little in recent times. Joey Belladonna smashes the ball straight out of the park, singing the songs with as much power and energy as he could several decades ago – and in the same key as the original recordings, too. Newest member Jon Donais also holds his own as the lead guitarist, bringing new life and pure shred to some of the leads over classics such as I Am The Law, Be All End All and Skeletons In The Closet, to name a few. Meanwhile, the rhythm section keep everything locked in behind them, a well-oiled machine since 1984.

XL definitely has that ‘live’ feel. It’s not a studio performance, but benefits from the sonic quality of a studio album, recorded professionally as a live stream. Hopefully, we now live back in an age where bands can do these ‘performances’ by choice rather than necessity. XL has all the little additions and deviations that Anthrax do when you see them live – such as the intro groove to A.I.R. that’s not on record or Charlie’s unexpected blastbeats in N.F.L. Anthrax are also bold enough to keep in the (few and far between) imperfections and mistakes over their set, staying true to their performance on the day.

It’s a 25-song marathon, so the question is, what’s in, and what’s out? All the Anthrax classic ‘hits’ that you’d expect are in – it wouldn’t be them with Caught in a Mosh, Madhouse or Indians – so it’s also great to have a few deeper cuts from that era thrown in, such as Now It’s Dark or Protest and Survive. The second Belladonna era is also very much present, and XL is a great reminder of how vital songs such as The Devil You Know, Evil Twin and In The End are in their discography (though perhaps I’d have swapped out Blood Eagle Wings for You Gotta Believe, Suzerain, Zero Tolerance or the title track for some For All Kings representation). The only non-Joey era song seems to be Metal Thrashing Mad (which obviously couldn’t be left out!) – so it’s a shame, if understandable, to hear nothing from the John Bush era. It’s surprising that I’m The Man doesn’t get a run-out, but it’s a surefire treat when Chuck D joins for a storming rendition of Bring The Noise.

Bring The Noise is arguably one of the most important tracks Anthrax did, even if it’s not the sound you associate with them straight away. It reminds us of the influence they had in more than just extreme metal circles – how might rap metal or nu metal have been different without that collaboration? They might not have had the same commercial success or be quite as far up festival bills as the other three of thrash’s Big Four. Yet XL celebrates their legacy, which as this release proves (again), is untouchable.

They still remain the hardest ever.