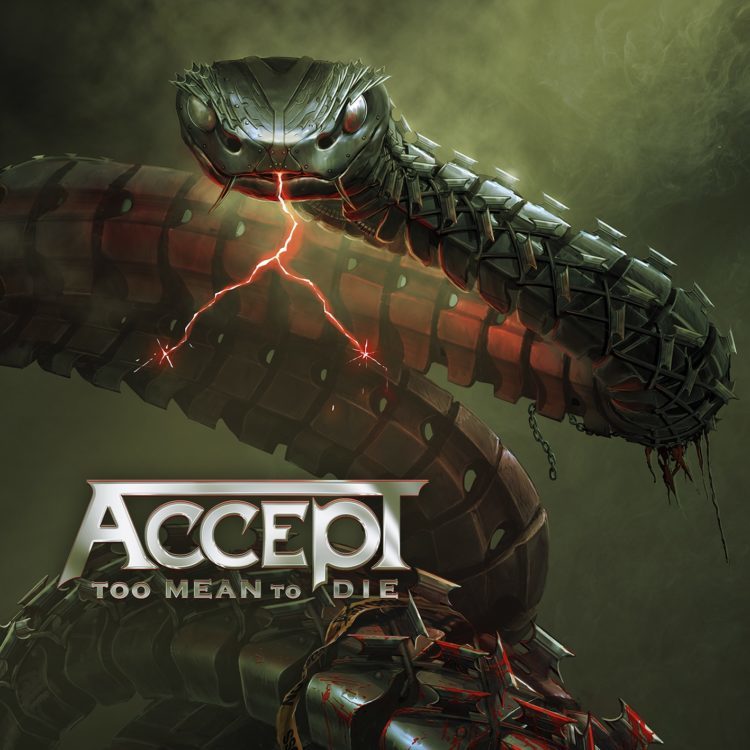 Although I adore Accept classics like Fast as a Shark and Fight It Back, I do have a lot of the band’s latest work on regular rotation. Think Stalingrad, Teutonic Terror and Koolaid, all tracks featuring massive riffs and those good ol’ macho vocals. These qualities are certainly not amiss in Accept’s latest effort, a masterclass in heavy metal from start to finish.

Too Mean to Die is the band’s 16th studio album, an impressive feat especially when considering the strength of Accept’s current material. The album is the first to feature bassist Martin Motnik after Peter Baltes left after 42 years as a member, leaving iconic guitarist Wolf Hoffmann as the sole survivor of the original line-up.  Also joining the line-up is rhythm guitarist Philip Shouse, transforming the band into a sextet with three guitarists. Too Mean to Die showcases a refreshed Accept with the crystal-clear production of Andy Sneap, demonstrating how the band refuses to back down without a fight.

Opener Zombie Apocalypse teases the listener with slow bombastic riffs before descending into a screech from Mark Tornillo and those pounding steel factory guitars that Accept have proudly made their trademark. As ever the chorus is ridiculously catchy, the rhythm guitars providing a solid foundation with flourishes of solo melodies layered on top. The lyrics speak of a new epidemic yet not one driven by gruesome corpses. Its a song that critiques technological influence, the need to disconnect before we lose all sense of humanity. I find it a little cheesy but i appreciate the message of the extremes of technology addiction.

Title track Too Mean to Die contains a more classic rock riff that’s injected with the speed that inspired the plethora of thrash bands we have now. Accept still possess the drive and hunger that is evident in their extensive back catalogue, refusing to mellow and subdue with age. Too Mean to Die really raises the middle finger to the societal expectations of slowing down and retiring in older years. Don’t expect Wolf Hoffmann to be crocheting and sipping Horlicks anytime soon.

Overnight Sensation drives forward with a more moderate tempo and lighter guitars, Tornillo’s vocals commanding full attention in that typical whiskey drenched fashion. The chorus is simplistic and is perfectly designed for a live sing along in a packed venue (remember that?). I certainly didn’t expect a reference to the Kardashian’s in an Accept track but shows how the band’s social commentary has overlapped into a modern context, critiquing the instant gratification of social media. I’m torn between liking this approach or dismissing it as a classic boomer style complaint. Either way still a great track.

The criticism doesn’t halt there. No One’s Master speaks of the media’s mass control, the division between the classes and the lining of the riches’ pockets. The chorus is a battle cry of defying conformity, demanding honesty and truth. No matter how frequently these topics pop up in metal and how naff it often sounds, my simple leftie nature is always left (heh) satisfised. The solos in here are fantastic with a real classical flair, a nice juxtaposition with No Ones Master’s metal focus.

The Undertaker opens with soft melodies intertwined with subtle sinister tones, the solo guitar on top possessing a hint of UFO’s Doctor Doctor. The bass and drums then take centre stage in the verses, providing such a distinct and refreshing rhythm. The rousing chorus feels so all-encompassing after a gradual build up. It’s such a great track for flaunting different musical directions, a song where you’re wondering which route it’s going to take next.

Sucks to be You takes a more simplistic approach, a fantastic heavy metal track that has such an Ugly Kid Joe vibe to it in the chorus. As the title suggests, Symphony of Pain is truly classically influenced, the beginning so intricate before sliding into another crushing metal riff. There’s even an explicit nod to Beethoven’s 5th Symphony at the end. There’s no doubt that metal and classical music have a special connection and this is shown beautifully within this track.

Another tone shift comes in the form of The Best is Yet to Come as Accept approach ballad territory. It’s so welcoming and different to hear Tornillo’s soft singing voice, all alcohol drained away from those guttural tones.  The guitar work is exceptionally beautiful here too. The chorus flourishes with optimism – “When it rains, I look for rainbows. When it’s dark, I see the stars.” There’s such beauty here in its poetic simplicity, a message and outlook that we all need more of in these dark times.

How Do We Sleep is a solid metal track, giving commentary on the destruction and bleeding of the planet, a bleaker angrier outlook than the previous song. The two create a perfect dichotomy that summarises the complexities of navigating through our issues and the hurt we inflict on the planet and others.

Too Mean to Die concludes with the last remaining tracks of Not my Problem and instrumental Samson and Delilah, the latter truly shining with Wolfmann’s hypnotic Egyptian style melodies and solos.

For what’s set to be another challenging year, Accept have given us a beam of hope at the start of 2021, signalling that classic heavy metal is alive and thriving. The band’s musicianship is as tight as ever, providing tracks that glisten with melody, ferocity and power.

Accept are a part of Nuclear Blast. Too Mean to Die is out on January 29th.