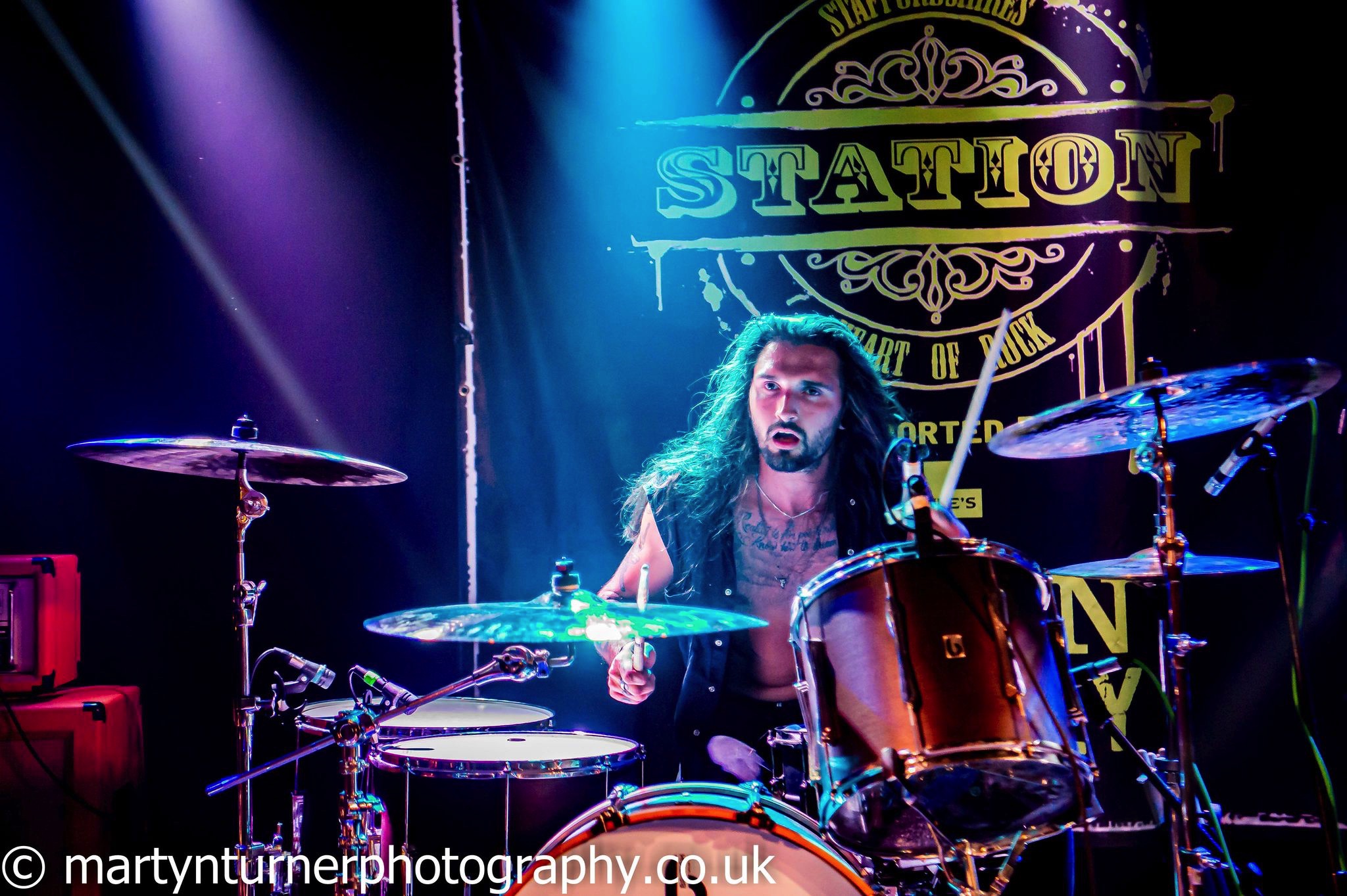 A great atmosphere in The Station tonight, even before the start it’s hectic, with so many people catching up with friends. I’m no exception, chatting and hugging away, the first band are on stage when I finally reach my seat and have said hi to everyone. There are a few surprises in store as well.

The False Hearts have been regulars on the road since 2016, the four piece from Cambridgeshire are fronted by Emma Hodgson, one of the best female vocalist’s on the UK circuit. First surprise of the evening is seeing Phil Haines on stage, as the ‘Hollowstar’ guitarist is standing in for Ben who is unavailable. Despite being first support, it’s a lengthy set and opener is ‘Addicted To Pain’ sees Phil already settled in, it’s a tremendous beginning. As we hear more from ‘Dirty Little Soul’ and the newer ‘Remedy’ that came out in 2020, it’s apparent that Emma is singing on another level tonight, she has such a powerful and evocative tone and her controlling presence in front of the audience is quite amazing. The new single ‘ See Me Now’ lets us sample the bass of Phil Benton and Adi Bowles on drums remains solid at the back. After ‘Breathe Again’ which closes the set, the crowd are nodding with appreciation. Look out for False Hearts on the road, they have a lot of gigs lined up.

The local heroes Liberty Lies are a last minute change to the bill, but a welcome one. I notice another replacement, as ex member Liam Billings is with them, so it’s no shock that the running is a little different. After that spectacular opening at Steelhouse in 2019 and the launch at their home gig in the Splinter Studios Wednesbury, for ‘It’s The Hope That Kills You’, I have so much admiration for them. Tonight they rock it up even more, as they test the tracks with heavier gears, for the upcoming appearance at Bloodstock. And it works, such good writing and the ability to delve within, they pump it up and are on fire. After ‘A Thousand People’, ‘United Nothing’ and Coming Home’ we are prey to the new number ‘Find Me’ which is already a favourite with the radio stations. A spontaneous cover of AC/DC’s Highway To Hell’ is included as well, which gets everyone rocking even more. They finish with ‘Are You Listening’ and frontman Shaun Richards demanding that we clap along, an excellent response and it’s all over way too soon. If you don’t see them at Bloodstock, they are appearing at Rockin’ The Bowl on September 10th & The Mayors Fest at KK’s Wolverhampton on September 25th.

I haven’t seen Wolf Jaw that many times live, but did enjoy watching them on the steam for the NWOCR Webfest recently. Also a local band, the three piece offer their own intoxicating blend of heavy riffs and mesmerising grooves. Vocalist and lead guitarist Tom Leighton, being the defining frontman, with his cool pose and charming manner, that soon begins to hold our attention. Wolf Jaw embark, with ‘Hurricane’ and ‘Who Needs A Soul’ from the latest album ’Starting Gun’, then we are guided through older tracks ‘I ain’t Ready’, ‘Hear Me’ and the resilient ‘Beast’, before one of my favourites ‘Shoulda, Woulda, Coulda’ and the Cannock punters are loving every minute of this. Two more from the new release are laid before us ‘Thunder Child’ and ‘City Lights’ which is a stupendous finale. Fantastic entertainment, especially with the ‘Animal’ like drums from Karl Selickis and listening to Tom’s enlightened words. Dale Tonks completes the line up with his sturdy and thunderous bass, which doesn’t go unnoticed, his low undercurrents are significant to the overall finish. See Wolf Jaw at The Robin 2 on August 26th and they support Phil Campbell and The Bastard Sons on their tour in November.

It was a night of changes and modifications, but I enjoyed all three bands and what they gave us. I certainly want to see them all again soon too, especially with the new tracks, which hold so much promise.

Special thanks to – Dave at  The Station , Brett Hall , Muttley of   Iron Road Talent Management  & Doddy White of Rockers Through The Ages