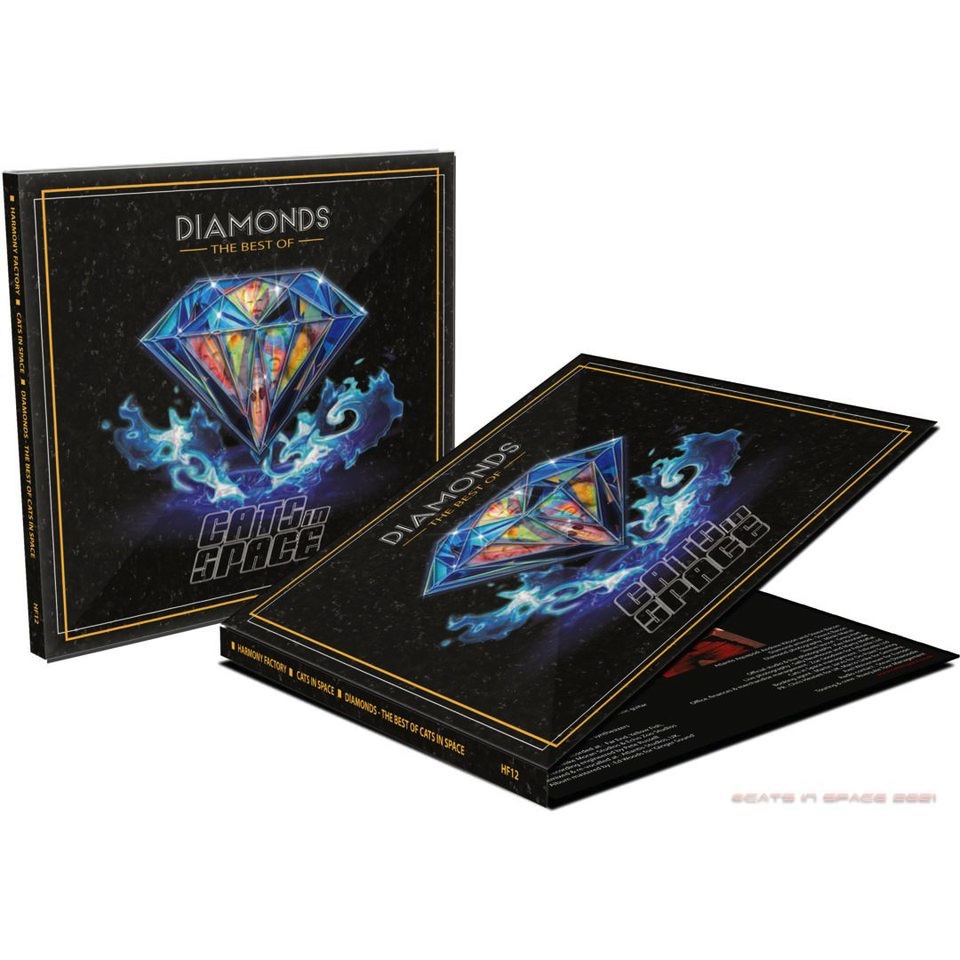 After four studio albums, Cats In Space have decided to release a ‘Best of’ album. However, this isn’t just previously recorded material on a new record, ‘Diamonds’ is fourteen tracks on a CD ( Eleven on the vinyl version) reworked and remastered with the vocals of new frontman, Damien Edwards. Six musicians, who all have careers that leave you gobsmacked, are now firmly rooted with this project. The past experiences and differing talents combining to produce a band that’s unlike any other. For example, Damien has performed as Roy Orbison and appeared in Jeff Waynes ‘War Of the Worlds’ as Parson Nathaniel. Guitarist Greg Hart is credited on the Asia album ‘Aqua’ and has been in bands since the early 80’s and Keyboards wizard ‘Andy Stewart’ has been a musical director for stage shows and was with Greg in the band ‘Moritz’. Drummer Steevi Bacon played on two Robin Trower albums and Jeff Brown has been bassist in The Tremeloes and spent sixteen years with The Sweet. Guitarist Dean Howard first saw fame with T’Pau and went on to play with Ian Gillan and Toby Jepson, as well as having toured with Bad Company. After learning of the impressive pedigree a couple of years ago, I did do a review in 2019 for ‘Day Trip To Narnia’, which I found to be a surreal journey into the cosmos and quite a mind absorbing and stunning album. So having a liking for ‘Cats In Space’ already, I couldn’t wait to hear the remixed versions on the CD, which comes with other bonus features.

’Too Many Gods’ from the 2015 debut album of the same name, is an appropriate first track. A smooth runner with all the harmonies and pounding rhythm that allows you to get into the right frame. ‘Silver & Gold’ and ‘Chasing Diamonds’ both off ‘Day Trip To Narnia’ echo with all the precise musicianship and gravitational pull, that these megastars are able to offer you. Damien is superb, he has a voice that isn’t strained or over powering and I adore how he controls his vocals on the latter, which is the most poignant of ballad’s. ‘Thunder In The Night’ is another from the same album, which has the added title’ The Story of Johnny Rocket III’ on the concept record. More bold and having an increased pace, you can pick out the presence from each band member and soak up the ambience. The album moves on, with a few from ’Scarecrow’, beginning with the mesmerising ’Scars’ that touches your soul with its delicate and entwining lyrics. The title track ‘Scarecrow’ with its racing delivery and ’Two Fifty Nine’ which is full of spectacular keyboards from Andy are separated by ‘Hologram Man’ which is one of my favourites, as it just glides with melody and a soaring chorus, time for a few guitar moments as well.

The album wouldn’t be complete without a selection from ‘Atlantis’ the 2020 album that has received so much praise, so the CD has three bonus tracks from it. ‘I Fell Out With Rock ’n’ Roll’ is a slow lament and a classic showman type of anthem and there’s some sumptuous guitar to raise its profile. ‘Listen To The Radio’ has a pile of bounce and the keyboards dominate early on. It stretches midway with a fabulous guitar solo, that runs and outskirts Steevi’s drums, which are unavoidable and heard even more during ‘Revolution’. Alongside, bassist Jeff Browns amazing low thudding strings are the twin guitars of Dean and Greg, who offer up their services to complete the richer sound. The album finishes, with a live version of ‘Greatest Story Never Told’ that was recorded at KK’s Steel Mill in Wolverhampton. A powerful song if ever there was one, it certainly lifts and gains pressure as it meanders. The vocals are off the scale, just incredible and as the momentum gathers, it turns into an epic of immense proportion, what a jaw-dropping way to end.

One thing about ‘Cats In Space’ that impresses me, is the unending schedule and the ability to laden you with stacks of ‘Cats’ related goodies. This latest release coincides with the ‘Dive Into Atlantis’ tour that kicks off in Lancaster and sees them make an appearance at the Stonedead festival on the 27th August, where the MMH crew will be among those presiding. The band are already planning a follow-up to ‘Atlantis’ and have recently been recording at the legendary RAK Studios in London. A remixed ‘Mr Heartache’ with Damiens vocals, that also features on ‘Diamonds’, will be released soon as a single. It will be in clear 7” vinyl, with an exclusive B-Side ’Twilight’ and a choice of three picture sleeves.

‘All the precise musicianship and gravitational pull, that these megastars are able to offer you’

If you haven’t ordered DIAMONDS yet, then the link to the WebStore is: