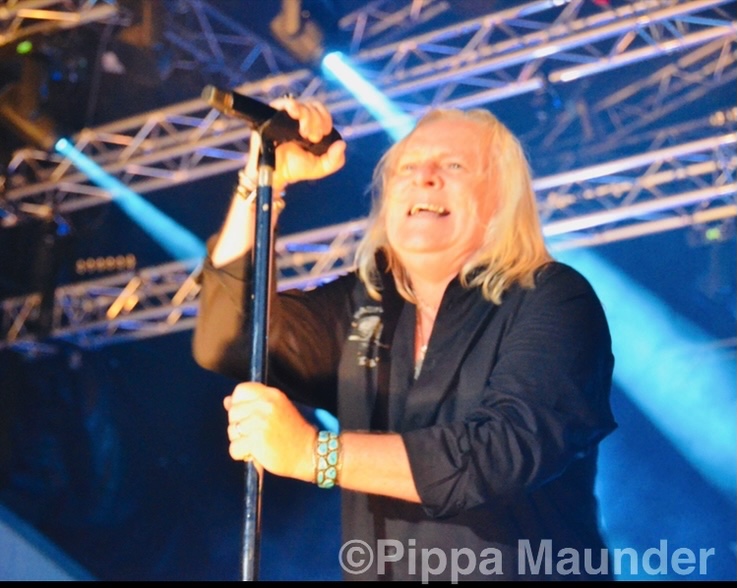 The last day already, like I said previously, this weekend just flies, three days is not enough even though Friday starts at an earlier time now ! Last jaunt from the hotel to the mountain and I remembered to take my lateral test, no queue this morning and after bumping into a few friends, it was down to the front with a coffee. The weather forecast is for a dry day so fingers crossed.

EMPYRE – I have seen these Northampton based guys a few times now and always indoors, so this time being outside, it’s a new listening experience. Empyre have this unique sound, mainly down to Henrik Steenholdt’s persistently soulful vocals and Did Coles’ dramatic guitar. They mix lengthy and well constructed lyrics with slivers of haunting melody that transpire into something that other bands would find daunting to emulate, yes, they are truly one of a kind. Completed by drummer Elliott Bale and the incredible bass of Grant Hockley, the four bind so well together, like there’s some level of telepathy between them. Despite the noon appearance and soreheads from last night, there is a generous amount watching and taking in the twists and turns of Empyre’s music. Playing tracks mainly from the ‘Self Aware’ album, the mountain air, is filled with the bands atmospheric tones and we hear a couple of new songs, ‘Waking Light’ and ‘Relentless’. Both are well received and if you need any introduction to the band, other than the debut album, listen to ‘The Other Side’ an acoustic version of nine tracks from ‘Self Aware’ that they brought out earlier this year. I was lucky enough to interview them later  –

COLLATERAL – One of the friendliest bands around, Collateral arrived last night and were seen for hours in the guest tent catching up with everyone. There are six in the band these days as they have added a second guitarist, Louis Malagodi and keyboard player Robert Richard James. So although the setlist is from the debut, self titled album and the new single ‘Can’t Hold Me Down’ there is a more enriched fullness that’s evident after listening to ‘Mr Big Shot’, Merry Go Round’ and ‘Lullaby’. The softness and melodic harmonies are not lost in the open air and the only setback is when vocalist Angelo Tristan is unable to get his coat off, the struggle with the stage guy turns into quite a battle before the sleeves finally give way. Don’t worry Angelo, I saw Spike from the Quireboys have the same problem when he borrowed a female fans long sleeved jacket, so you’re not the first. Quite a few Collateral followers in the crowd, they do have a large fanbase, I think it’s because they offer something a little different and the look is amazing, the long hair, embellished clothes and cowboy boots, make them stand out. Always on the road, watch out for more appearances soon.

MASON HILL – Lower down the running order than I would have expected, but the recent success of the debut album, will probably change that for any future appearances. Frontman Scott Taylor gets the crowd clapping from the start, as they plough into numbers from ‘Against The Wall’. He looks a little emotional and that’s to be expected, it’s been a long journey to get where they are standing today. The kickstarter campaign managed to fuel the album and the guys were all over the social pages plugging it with relentless pressure. Getting to 6 in the main music charts was an outstanding accomplishment and if you listen to these blazing songs, you can understand why. Today they are on fire, the Steelhouse faithful respond to Scott’s every command and as the ear worm ‘DNA’ is chanted by the whole field, we also sing along to all the amazingly well crafted numbers, ( see the bands social pages for evidence of our participation ). Bassist Matthew Ward is celebrating his birthday in style, even a cake is brought out to him. The twin axes of Marc Montgomery and the exceptional James Bird, dazzle us with their simple yet unfaltering playing and backing them on the stool Craig McFetridge, is ever resilient and his bold sticks, lay a solid base layer. Even lower level songs are met with applause and it’s one of the performances of the day for me, finishing on the Foo Fighters ‘Best Of You’. See Mason Hill at Nozfest , Weyfest then on tour in September and October.

WAYWARD SONS –  Moving to the vacant Sunday slot at 3.30pm, Toby Jepson and the band are a welcome sight. A lot of us have a high regard for the Wayward Sons, they never fail to please and always deliver a cracking show. More intense than previous work, the albums to date, especially ‘The Truth Ain’t What It Used To Be’ can be described as politically motivated satire and have both personal and general messages for those in power. But even with all of this, the songs are creative and a joy to hear and the Sons carry them onto the stage with gusto. ‘Any other Way’ introduces the band to Steelhouse today, punching the bag from the start, Toby is in fine form and the sound is excellent. With a new album ‘Even Up The Score’ due out in October, we get to sample a few newbies. Starting with the title track, which is about getting revenge judging by the lyrics and ‘Big Day’ which I like, as reminds me of the day I retired from my day job ! ‘Bloody Typical’, the deeper ‘Faith In Fools’ and ‘Fake’ also from the new album, are given a chance to be heard live and are noddingly approved of, as much as the older songs. Finishing on ‘The Jokes On You’ and the popular ‘Until The End’, another totally well executed set from one of our much loved icons. New album and tour news below  –

STONE BROKEN  – Another young band that whip up the crowds singing abilities, Stone Broken have been around for a few years now and have established themselves firmly, as a talented band with plenty of depth and soaring riffs. There’s no denying they can entertain and they can hold a crowd as large as this Steelhouse one, no problem. Getting back into action and fresh from a Download appearance, after the storming ’Stay All Night’  they play a few from ‘Ain’t Always Easy’ their second album from 2018. ‘Doesn’t Matter’, ‘Heartbeat Away’ and ‘Let Me See It All’ let us sway with the velvety voice of Rich Moss, cool harmonies and the contrasting, rugged guitar of Chis Davis. ‘Worth Fighting For’ is always well received and the Steelhouse mountain is bouncing with the fans singing and it’s so good to see so many people enjoying themselves. Ending on the dynamic ‘Not Your Enemy’ with its classy and flowing rhythm, it’s a yes from me. The band have announced The Revelation Tour for early 2022 and a third album is in the pipeline.

BERNIE MARSDEN  –  The legendary Bernie Marsden is brought in at the last minute, due to the billed overseas bands unable to play, but hey, we love the modified bill, as Bernie is always a welcome sight. With Ex Skin and Hand Of Dimes vocalist Neville MacDonald, the plan is to play Whitesnake’s greatest hits. (How long has he got !) Indeed, ‘Fool For Your Loving’ and ’Sweet Talker’ are closely followed by ‘Ready An’ Willing’ and in the Sunday early evening sunshine, it’s a perfect vision. With the addition of two backing singers, the melodic numbers, mostly written by Mr Marsden are sounding sweet. My mind drifts, so many memories, Whitesnake at the Reading Festivals in ’79 and ’80, with Bernie and fellow guitarist Mick Moody, the cans flying and singing along to the chorus to ‘Ain’t No Love In The Heart Of The City’ for about Twenty minutes. Then I remember watching Neville in Skin with Myke Gray, at the old JB’s Dudley, crikes, so much water has passed ! There’s a tribute to the late Peter Green as they play ‘Oh Well’ and then a return to Whitesnake with ’Trouble’ from the first album in 1978 and ‘Walking In The Shadow Of The Blues’ off the epic 1979 ‘Lovehunter’. Has to be the classic ‘Here I Go Again’ to see them out and yes they won Steelhouse over.

THE WILDHEARTS –  Another band I can recall seeing from their early days, with Bam Bam ( Dogs D’Amour) on drums, oh my ! Colourful, sporadic and full of Geordie humour, you have to accept that it has often been the Earth versus the Wildhearts, read the band’s bio it’s something to savour. After the chaos affecting their Download show recently, when Ginger walked due to the sound ‘being shit’ as he described it, we watch for their emergence with bated breath. That short Download set wasn’t anything new, remember 2008 when they walked after bottles were thrown, it’s always been a bit unpredictable as to what you’re going to get from The Wildhearts and I think that’s why they have so much of a following, we just love the anti social and decadence that rock and roll often chucks at us. Anyway, the Wildhearts are back, there’s a new album due ’21st Century love Songs’ and today the line up is the most successful one, Ginger, Ritch, Danny and CJ. The punk/metal rock band give us ‘Diagnosis’, ‘Dislocated’ and ‘Let ‘Em Go’ from 2019 and steadfast tracks of old ‘Everlone’,’ Suckerpunch’, ‘Vanilla Radio’, ‘I wanna Go…’  all  mashed up in quick Wildheart nonstop fashion. Some of my favourites ‘Caffine Bomb’, ’TV Tan’ and ‘My Baby Is A Headf**k’ are also included. It all goes smoothly right up to the finale ‘Love U Til I Don’t’ phew a relief and a pleasure to see them on stage again.

We at MMH have The Wildhearts as headliners for our 10th Anniversary party in November, for details and tickets see the link below –

URIAH HEEP  –  After the bands afternoon performance last time up here at Steelhouse, how could they refuse the opportunity to headline this year ? Only guitarist Mick Box remains as an original and founding member, but vocalist Bernie Shaw has been with the band since 1986, would you believe. The Canadian has the most delectable of voices and can hammer out the classics with soul binding quality and we do hear a few of the glorious tracks from the early days, besides newer material. Uriah Heep, now get this, were founded in 1969, I discovered them in 1973 after I bought ‘The Magicians Birthday’ but even by then they had had success with ‘Very Eavy, Very Umble’ and ‘Demons And Wizards’. A part of rock history with over 45 million album sales worldwide and they have 24 Studio albums to their name, the last being ‘Living The Dream’ in 2018. The band don’t rely on the older stuff either, as they do air quite a few of the more recent songs.  What a splendid way to end the festival, watching Mick Box, rock royalty from the 60’s who still plays like he’s 19 years old. The last songs are by way of an encore with ‘Sunrise’ and Easy Livin’ I think all ages enjoyed this, not just us oldies, but I hope the younger generations appreciated what they witnessed tonight.

As we watch the fireworks and head back down the Welsh mountain for the last time this year, it’s easy to say what a total success Steelhouse has been yet again. I can’t speak highly enough of the organisers and staff who make this festival so enjoyable and hassle free. See you next year guys and thank you.

Special Thanks to Heidi Kerr from RPM ( Rock Music Management )  – For arranging the Empyre interview.