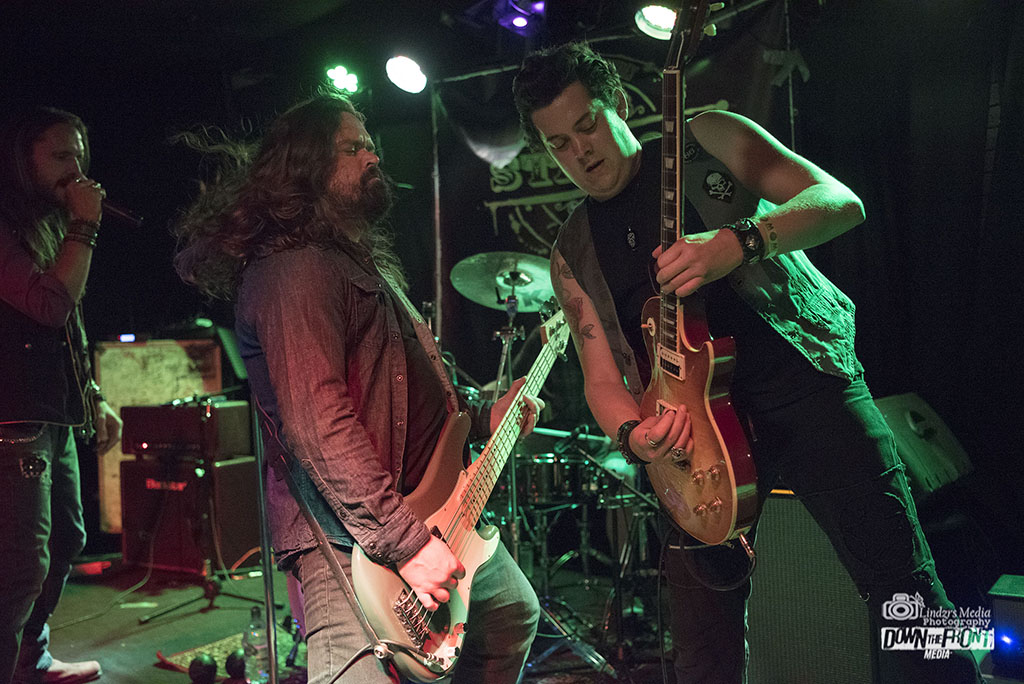 Three bands on tonight, at the ever popular STATION and surprisingly it’s three new bands for me. So full of anticipation I wander in as the first band start, not many in to watch them for a Saturday night, but you can never tell these days just how many are going to turn up.

These 3 from Llandudno have been gigging since 2011. Recently hitting radio waves with their fresh and easy to handle brand of rock, they offer strong vocals and pulsating guitar from Tom Rogowski and boundless energy by way of Morgan Owen on bass. The 3 track EP from last year ‘Light It Up’, is played in succession. The title track is a good indication of how the young trio, have no qualms about playing a more mature sound, maybe picked up from playing alongside FM and Toseland in the past. ‘Whats Left Behind’ is a bit of an anthem, Tom’s brother Alex is on drums and backing vocals and completes a rather impressive line up. The last track from the EP is ‘Into The Blaze’ it’s a hooky little number and influences like AC/DC and Airbourne play a part in the result. Also from 2018 ‘Partner In Crime’ has some nice guitar work and a tinge of Queensryche. ‘The Truth’ has a more complicated mix and they finish with the new single ‘Run Away’ which has just been released. Quite an entertaining half hour, thanks guys.

One word for a gathering of Ravens is a Conspiracy, tonight there are a quite a few White Raven Down fans who fall into that category and some like me who haven’t seen them before, am I about to join the conspiracy? After quite an astounding introduction with ‘Mind Reader’, they play ‘Broken Door’ which was the first track on the Conspiracy EP, it’s an epic, the melody really sticks and Will Taylors haunting vocals are so powerful. ‘Not Alone’ is also off the EP and is a race of grunge inflicted guitar. Bass from Luke Chappell and Tom Mrazek on drums provide an unwavering backline. WRD continue with ‘Demons’ and ‘All Day Long’ which has a marvellous guitar solo by way of Stu Bailey, who must have one of the largest collection of pedals in the business. The debut single ‘Take Me’ builds into a mass of thunderous heavy grooves, with more impressive guitar and high ranging vocals. Despite suffering with a torn ligament in his knee, Will delivers ‘Salvation’ without showing any sign of pain, his voice is really appealing. After thanking the audience and Stu Bailey leaving the stage and joining us for a while, ‘Silence’ which is a more slow and dramatic number, brings matters to a close. The Essex crew were quite extraordinary tonight, heavy, tight and unrelenting. Before you ask, yes I have joined the Conspiracy.

Headlining tonight, all the way from Bournemouth are Voodoo Vegas. Frontman Lawrence Case is an imposing figure, tall with striking good looks and the ability to hold the crowd with his banter alone. First up is ‘Don’t Need Your Love’ which recently came out as a single, a nice rousing rocker, with some superb drumming from Mike Rigler. This is a perfect introduction to the Voodoo’s, I am in awe with this 5 piece from early on, they bond so well on stage. The two guitarists Merylina Hamilton and Jon Dawson are both equally competent and add differing vibes, which give the songs more richness. Ash Moulton on bass, is a powerhouse and plays up front with some major attitude. ’Revolution’ is the latest release, the catchy chorus ’We Need A Revolution Now’ has the Cannock crowd clapping along. A bit of an experiment is the decision to cover the Sweet’s Ballroom Blitz and mix it with Radar Love. Personally I think the latter would have been sufficient, as they did an excellent job of the Golden Earring favourite. ‘Come On Over’ is fast and sleazy and has some super smooth guitar and ‘So Unkind’ is a real side step, slide guitar, almost Zeppelin in places and bluesy tones that make it a fantastic listen. ‘Love Shines’ is another new song and takes us down to a more slow and quieter level. They end with ‘King Without A Crown’ from the 2013 ‘The Rise Of Jimmy Silver’ album. With no new music for nearly 2 years, due the fiasco that was Pledge Music, there is finally a new album on the cards. ‘Feeling So Good’ their third LP, is due out in November and Voodoo Vegas will be back with a full tour to promote it.